Ordnance Factory Tiruchirappalli (OFT) also called Ordnance Factory Trichy is a defence company based in Tiruchirappalli, Tamil Nadu. It is one of the 41 Indian Ordnance Factories[1] functioning under the Ordnance Factories Board[2] of the Ministry of Defence, Government of India. It was inaugurated on 3 July 1966 by the then Prime Minister of India Indira Gandhi[3] and the production began in 1967. It was established to increase the small arms production in the country assisting the Rifle Factory Ishapore and Small Arms Factory, Kanpur. The need was felt after the Indo-Pakistani War of 1965. It started its production with 9 mm carbines and now manufactures arms ranging from .315 bore rifles to high caliber shell launchers, grenade launchers, aviation armament, naval armament, tank armament, anti-aircraft guns, automatic rifles, sniper rifles.[4] The factory is headed only by an IOFS officer called General Manager (ex officio, Additional Secretary to Government of India) who is the Chief Executive Officer responsible for the overall management of the company and is the main judicial authority.[5] 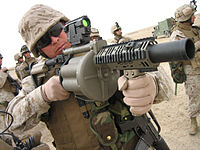 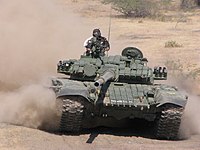 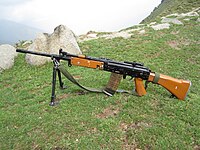 OFT currently manufactures some products under license from the foreign companies that produce them. It is working closely with the Armament Research and Development Establishment[32] and other laboratories and establishments of Defence Research and Development Organisation (DRDO) to indigenise the weapons. It is also working with the companies to develop new products that would be jointly engineered.

OFT mainly manufactures weapons for the

Various weapons manufactured by OFT such as the INSAS rifles have also been exported to several other countries.[35][36]