The Order of Saint Vladimir (Russian: Орден Святого Владимира) was an Imperial Russian Order established in 1782 by Empress Catherine II in memory of the deeds of Saint Vladimir, the Grand Prince and the Baptizer of the Kievan Rus.

The order had four degrees and was awarded for continuous civil and military service. People who had been awarded with the St.Vladimir Order for military merits bore it with a special fold on the ribbon - "with a bow". There was a certain hierarchy of Russian Orders. According to this, the St. Vladimir Order, 1st Class was the second one (the first - St. George Order) by its significance. According to the Russian Law about the Nobility, people who were awarded with the St. Vladimir Order (each class) had had the rights of hereditary nobility until the Emperor's Decree of 1900 was issued. After this only three first classes of the Order gave such a right.

Badge: A red enamelled cross pattée with black enamelled borders, and a black enamelled central disc bearing a crowned red and ermine mantle with the monogram of St. Vladimir. Worn on a sash by the first degree, on a necklet by the second and third degrees, and on a chest ribbon by the fourth degree.

Star: A four-pointed star superimposed upon a four-pointed gold star, with a golden cross pattée and the letters "CPKB" between the arms of the cross on a black enamel background at the centre surrounded by the motto of the order "Benefit, Honour and Glory" (Pol'za, chest' i slava). Worn on the left chest by the first and second degrees. This motto was transferred to present-day star of the Order of Merit for the Fatherland, which was established in 1992 by President Boris Yeltsin and is today the second highest ranking decoration of that country.

Star of order with Swords

Cross of the 4th Class with Swords

Order of St. Vladimir of the Russian Orthodox Church

In 1957, in commemoration of the 40th anniversary of the Patriarch's restoration in Russia, an Order of St. Vladimir was created by the Russian Orthodox Church. The order is to be awarded to priests and nuns of Orthodox church for their service to Soviet Union and later Russia. There are three degrees of the order.[1] It has no relation to the former imperial order.[2] 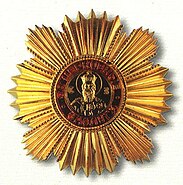 This is an incomplete list, which may never be able to satisfy particular standards for completeness. You can help by expanding it with reliably sourced entries.