Military Wiki
Register
Don't have an account?
Sign In
Advertisement
in: Articles containing Bulgarian-language text, Military awards and decorations of Bulgaria, Orders of knighthood of Bulgaria,
and 2 more

The order was established with a decree of the Knyaz on 19 May 1900 as a sign of the benevolence of the Monarch to the bravery of the Bulgarian army. It was similar to the Order of Civil Merit but made for military personnel. The order was given to military figures for immaculate service and special merit. It was established with six grades and in 1933 the Grand Cross was added.

The order had a shape of Pisan cross with shoulder covered in red enamel. There were two swords between them with edges pointing to the top. In the centre of the averse was placed the monogram of the founder Knyaz Ferdinand, surrounded by a ring in green enamel with inscription ЗА ВОЕННА ЗАСЛУГА (For Military Merit). The averse resembled that of the Order of Civil Merit but with green ring. It had a royal crown on the top.

During war the order had slightly different resemblance with laurel wreath on the shoulders of the cross and white ring.

The Grand Cross was worn on a wide yellow ribbon with black and white edges - the colours of the Saxe-Coburg and Gotha dynasty. The fourth, fifth and sixth grade were worn on a small triangle ribbon on the chest.

After 9 September 1944 the ribbon was substituted with the one of the Order of Civil Merit, the monogram of Ferdinand was removed and replaced with the Bulgaria tricolour flag. In the 1950s the order was abolished. It was restored in two grades in 2004.

Grade in the Kingdom of Bulgaria

Order of Military Merit I grade 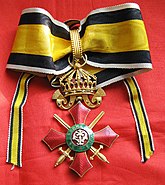 The Order of Military Merit is the third highest order in Bulgaria. It was reestablished with the Law for the Orders and Medals of the Republic of Bulgaria on 13 June 2004. It is awarded by the president of the nation.

Order of Military Merit I grade (averse and reverse)

Star of the Order of Military Merit I grade (averse)