Military Wiki
Register
Don't have an account?
Sign In
Advertisement
in: Articles incorporating text from Wikipedia, Military history of Singapore, Battles and operations of World War II, 1945 in Singapore

Operation Tiderace was the codename of the British plan to retake Singapore in 1945.[4] The liberation force was led by Lord Louis Mountbatten, Supreme Allied Commander of South East Asia Command. Tiderace was initiated in coordination with Operation Zipper, which involved the liberation of Malaya.

With the Soviet invasion of Manchuria and an American planned invasion of Japan, South East Asia Command were also drawing up plans to invade Malaya, codenamed Operation Zipper. With over 100,000 Allied infantry,[5] the plan was to capture Port Swettenham and Port Dickson, and would involve an airstrike of more than 500 aircraft of the Royal Air Force. The assault was scheduled for 9 September 1945, but was forestalled following the Surrender of Japan.[6]

Operation Tiderace was planned soon after the Atomic bombings of Hiroshima and Nagasaki. Emergency planning was put in preparation for the rapid occupation of Singapore at an early date should Japan agree to accept the terms of the Potsdam Declaration of 26 July.[7]

While Operation Zipper was executed ahead of schedule, it did so on a much smaller scale, having quickly transferred a proportion of its original strength to Operation Tiderace. The convoy consisted of about 90 ships,[3] which included two battleships, HMS Nelson and the French battleship Richelieu.[8] The heavy cruiser HMS Sussex served as the flagship.[9] HMAS Hawkesbury was the sole Australian warship during the Japanese surrender, escorting the repatriation transport Duntroon.[10]

The Japanese naval fleet in Singapore consisted of the destroyer Kamikaze[12] and two cruisers, Myōkō and Takao, both of which had been badly damaged before that they were being used as floating anti-aircraft batteries. Two ex-German U-boats, I-501 and I-502 were also in Singapore.[13] Both were moored at Singapore Naval Base.[14] Air strength in both Malaya and Sumatra was estimated to be a little more than 170 aircraft.[15]

Operation Tiderace commenced when Mountbatten ordered Allied troops to set sail from Trincomalee and Rangoon on 31 August for Singapore. The fleet was not armed with offensive weapons as Mountbatten had good reason to believe that the Japanese in Malaya and Singapore would surrender without a fight: on 20 August General Itagaki Seishiro, the commander in Singapore, had signalled Mountbatten that he would abide by his emperor's decision and was ready to receive instructions for the Japanese surrender of Singapore.[16] Japan's defeat in World War II had caught the Japanese Command in Singapore by surprise. Many were unwilling to surrender and had vowed to fight to the death. Itagaki had initially baulked at the order to surrender and instead ordered the 25th Army (the component of the 7th Area Army defending Singapore) to resist when the Allies arrived.[16] There was even a secret plan to massacre all Allied PoWs on the island.[16] However, three days after the emperor's announcement on 15 August, Itagaki flew from Singapore to Saigon to confer with his leader Field Marshal Count Terauchi, Commander of the Japanese Southern Army and all forces in South-east Asia. Terauchi prevailed over Itagaki who then sent his signal to Mountbatten. Newspapers in Singapore were finally allowed to carry the text of the emperor's speech, confirming what many already knew from listening to All India Radio broadcasts from Delhi on forbidden shortwave radios.[16]

The Allies arrived in Malaya on 28 August with a small portion of the fleet sent to Penang as part of Operation Zipper. When Penang surrendered without resistance, the fleet sailed for Singapore on 2 September, passing the Raffles Lighthouse at the Southern entrance to the Straits of Malacca.[17] The fleet arrived in Singapore on 4 September 1945, meeting no opposition.[16] However, the French battleship Richelieu struck a magnetic mine at 0744 on 9 September while passing down the Straits of Malacca. She eventually limped into Singapore at 1200 on 11 September.[18]

General Itagaki, accompanied by Vice Admiral Shigeru Fukudome and his aides, were brought aboard HMS Sussex in Keppel Harbour to discuss the surrender. They were received by Lieutenant-General Sir Philip Christison and Major-General Robert Mansergh. A tense encounter began when a Japanese officer reportedly remarked, "You are two hours late," only to be met with the reply, "We don't keep Tokyo time here."[17] By 1800, the Japanese had surrendered their forces on the island. An estimated 77,000 Japanese troops from Singapore were captured, plus another 26,000 from Malaya.[16]

The formal surrender was finalised on 12 September at Singapore City Hall.[16] Lord Louis Mountbatten, Supreme Allied Commander of Southeast Asia Command, came to Singapore to receive the formal surrender of Japanese forces in South East Asia from General Itagaki Seishiro on behalf of Field Marshal Hisaichi Terauchi, commander of the Japanese Southern Army Group who had suffered a stroke earlier in the year.[17] A British Military Administration was formed to govern the island until March 1946. Itagaki departed for Japan shortly afterwards to face his trial and execution as a war criminal.[17]

Japanese reaction to the surrender

Itagaki had met his generals and senior staff at his HQ at the former Raffles College in Bukit Timah and told his men that they would have to obey the surrender instructions and keep the peace. That night, more than 300 officers committed suicide using grenades in the Raffles Hotel after a farewell sake party.[16]

About 200 Japanese soldiers decided to join the communist guerrillas whom they were fighting just days before in a bid to continue the fight against the British. But they soon returned to their units when they found out that the MPAJA, which was funded by the Malayan Communist Party, did not plan to fight the returning British.[16]

Ships of the occupation convoy en route to Singapore, August 1945 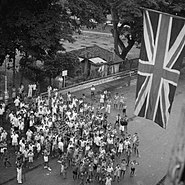