Operation Dewey Canyon was the last major offensive by the United States Marine Corps during the Vietnam War. It took place from January 22 through March 18, 1969 and involved a sweep of the North Vietnamese Army (NVA)-dominated A Shau Valley by the 9th Marine Regiment reinforced by elements of the 3rd Marine Regiment.

The 56 days of combat were a tactical success but did not stop the overall flow of North Vietnamese men and matériel into South Vietnam. The 9th Marine Regiment and attached units were awarded the Army Presidential Unit Citation for their actions in Operation Dewey Canyon.

Prior to the launching of the operation, U.S. Marine infantry units in the northern I Corps region had been tied to their combat bases along the South Vietnam border as part of the McNamara Line. This "line" was a combination of infantry units and ground sensors devised to stop North Vietnamese infiltration into South Vietnam along the Ho Chi Minh Trail. When Lt. Gen. Raymond G. Davis took command of the 3rd Marine Division, he ordered Marine units to move out of their combat bases and engage the enemy. He had noted that the manning of the bases and the defensive posture they developed was contrary to the aggressive style of fighting that Marines favor. In early 1969, intelligence reports indicated that there had been a large NVA build-up in the A Shau Valley. The A Shau was just 6 miles (10 km) east of the Laotian border and some 21 miles (34 km) long. Based on this intelligence, Col. Robert H. Barrow's 9th Marine Regiment was ordered to depart Vandegrift Combat Base some 50 miles (80 km) to the east and sweep west to deny use of the valley to the enemy.

Operation Dewey Canyon was divided into three parts: 1) the movement and positioning of air assets, 2) the movement of the 9th Marines south out of their combat base, and 3) the sweep of the A Shau valley. As the 9th Marines moved towards the A Shau valley, they established numerous firebases along the way which would provide them their artillery support once they entered the valley and guard their main supply route. All of these bases needed to be resupplied by helicopter because of their distance from the main combat bases and because resupply via ground was very difficult during monsoon season.

The Marines encountered stiff resistance throughout the conduct of the operation, most of which was fought under triple canopy jungle and within range of NVA artillery based in Laos. Marine casualties included 130 killed in action and 932 wounded.

In return, the USMC reported 1,617 killed enemies, the discovery of 500 tons of arms and munitions, and denial of the valley as an NVA staging area for the duration of the operation. They claimed the operation as an overall success. 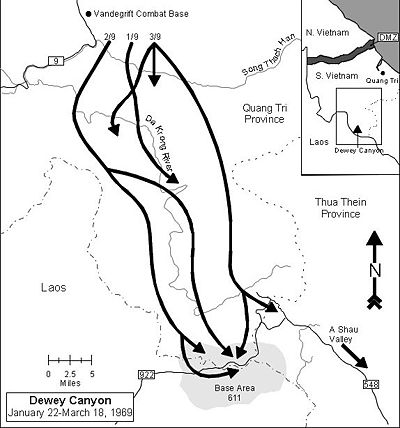 Operation Dewey Canyon was conducted in three phases with the raids into Laos being the third and final phase. Although all three battalions were involved with the operation, only elements of the 2nd Battalion actually participated in the raid into Laos. This was because each battalion was given an area of operation south of Fire Support Bases Cunningham and Erskine with 2nd Battalion 9th Marines area of operations taking them all the way to the South Vietnamese-Laotian border.

The third phase commenced on February 11, 1969, and by February 20, Lieutenant Colonel Fox's 2nd Battalion had both Echo and Hotel Company on the Laotian border. From their position, Hotel Company could see enemy convoys traveling along Route 922. Hotel Commanding Officer David F. Winecoff later reported in U.S. Marines in Vietnam High Mobility and Standown 1969:

"The company, of course, was talking about let's get down on the road and do some ambushing. I don't think they really thought that they were going to let us go over into Laos ... I knew if the military had their way we'd be over there in Laos and the company was all up for it.... With the Paris Peace Talks going on, I wasn't sure what route was going to be taken."

Requests had been sent up the chain of command to get permission into Laos by Major General Davis, 3rd Marine Division Commanding General. This led to Operation Prairie Fire conducted by Special Operations Group (SOG) to reconnaissance into Laos. On February 20, Lieutenant General Richard G. Stilwell forwarded Davis' request to have a limited raid into Base Area 611 up to General Abrams for his approval. Things in the field were moving along much faster, and on the night of February 20, Captain Winecoff continued to observe heavy truck traffic and called in a fire mission.

On February 21 Captain Winecoff received a message from Colonel Barrow 9th Marines Commanding Officer, to set up an ambush along route 922. The Captain's men needed rest, and he requested a postponement, one that was denied by Colonel Barrow. The Captain utilized his 1st and 2nd Platoons, and at 16:10 1st Platoon moved out and made its way to 2nd Platoons position. At 18:30 Winecoff briefed his men on the ambush. After dark they moved out towards route 922, about 900 meters away. By 01:00 Captain Winecoff and Hotel Company were in place and setting up the ambush. Within minutes of getting into position they started hearing trucks coming down the road and continued to observe as forty minutes later a lone truck and one NVA soldier also walked through the kill zone. Winecoff had not wanted the ambush sprung on one truck or soldier realizing that eventually a bigger target would come down the road. At 02:30 the lights of eight trucks appeared, and as three trucks came into the kill zone the column of vehicles stopped. Not wanting to give away the ambush or their position Winecoff set off the claymores and the ambush. The Marines poured small arms and automatic weapons fire on the three vehicles. As reported in U.S. Marines in Vietnam High Mobility and Standown 1969, the forward observer alerted the artillery, and rounds bracketed the company position.

After minutes of fire, Captain Winecoff had his men move forward ensuring that everything was destroyed. The company proceeded to move out to the rally point 600 meters away and waited till daylight. Later it rejoined with 3rd Platoon who had not been involved with the ambush because of the heavy patrols it had been involved with in the previous days. H Company was resupplied and the men rested. They had destroyed three trucks and killed eight NVA soldiers. Hotel did not suffer any casualties.

After Action Reports of the patrol was met with positive reviews, and General Abrams formally approved the operation. The success of the operation was more valuable than just the desuctruction of the enemy, because it allowed Colonel Barrow to request that continued operations in Laos be approved. His reasoning for continued operations was that the presences of the enemy in the area were a threat to his troops. Barrow noted, "I put a final comment on my message, which said, quote, "Put another way, my forces should not be here if ground interdiction of Route 922 not authorized." The message finally reached General Abrams via General Stilwell who had adopted the Colonel's recommendation. General Abrams approved for further action on February 24 but restricted discussions of the Laotian operation. The following days brought Hotel casualties not encountered in their previous incursion into Laos.

Hotel Company was ordered to go down route 922 on February 24. Morale was low because the Marines were tired after several days of patrolling. Additionally they did not want to leave the resupplies that included 60 mm mortar ammunition, C-rations and beer which they consumed as quoted by Captain Winecoff in U.S. Marines in Vietnam High Mobility and Standown 1969. Hotel Company was to move into Laos followed by E and F Companies and drive eastward on the road, forcing the enemy into the hands of the 1st and 3d Battalions. After a six hour night march, Hotel set up a hasty ambush; at 11:00 on February 24, six NVA soldiers walked into their kill zone of which four were killed. On February 25 Hotel Company continued to move eastward again engaging NVA, resulting in the capture of one 122 mm field gun, two 40mm antiaircraft guns and the killing of eight NVA soldiers. Hotel Company suffered nine casualties during this fire firght, two dead and seven wounded. Later that day a company patrol was ambushed by an estimated 15 NVA troops who were dug in fortified bunkers and fighting holes. The patrol was reinforced and was able to fight its way through, capturing a second 122 mm gun and killing two. Casualties were mounting for Hotel Company: three killed and five wounded. Corporal William D. Morgan was one of the men killed in action when he made a daring dash and directed fire away from Private First Class Robinson Santiago and Private Robert Ballou. Robert Ballou was wounded multiple times that day and Robinson Santiago was killed-in-action. Corporal William D. Morgan was posthumously awarded the Medal of Honor by President Richard M. Nixon for this action.

Hotel Company, flanked by Echo and Foxtrot Companies, continued their drive east, which was rapid and did not allow for the companies to do thorough searches. Advancing much slower would have garnered much more equipment. However, 2nd battalion did capture 20 tons of foodstuffs and ammunition, while killing 48 NVA soldiers. The three companies were within 1,000 meters of the South Vietnamese border by March 1 and were flown by helicopter to Vandergrift Combat Base on March 3, officially ending operations in Laos. 2nd battalion sustained eight killed and 33 wounded during the operation. For the record all of the dead were listed as being killed in Quang Tri Province, South Vietnam and for obvious political reasons no references were made about being in Laos.