During the first years of the world war OKW needed Adolf Hitler's approval for orders to OKH. This made the commander of OKH Walther von Brauchitsch the de facto head of all German Wehrmacht officers. After the German defeat outside Moscow in December 1941 the conflicts were resolved when von Brauchitsch was dismissed on 19 December, and Hitler appointed himself as commander of the OKH. Now Hitler was Chancellor, President and Commander in Chief. After this point orders from the OKW no longer needed Hitler's approval, as Hitler now began to participate in the war planning more personally by "joining" the OKW as well. The OKW Commanders Wilhelm Keitel and Alfred Jodl dared not oppose to any decision made by Hitler, however wrong they might have thought it to be. The General Staff of the OKH continued their work though.

Chiefs of OKH and Supreme Commander of the Heer

Chiefs of the OKH General staff

Although both OKW and OKH were headquartered in Zossen during the Third Reich, the functional and operational independence of both establishments were not lost on the respective staff during their tenure. Personnel at the sprawling Zossen compound remarked that even if Maybach 2 (the OKW complex) was completely destroyed, the OKH staff in Maybach 1 would scarcely notice. The camouflaged facilities were separated physically by a fence also maintained structurally different mindsets towards their objectives.

On 28 April 1945 (two days before his suicide), Hitler formally subordinated OKH to OKW, giving the latter command of forces on the Eastern Front.[2]

Flag for the Commander-In-Chief of the German Army

The design of this command flag was very simple. It only displayed the basic German nationalist colors of red, white and a black Iron Cross. For display on a motor vehicle the 30 cm (12 in) square flag was encased in a metal frame and held in place by a double-sided, clear perspex cover. As the Commander-In-Chief of the German Army inevitably held the rank of a generalfeldmarschall, the vehicle flag for this rank usually was displayed in conjunction with the command flag on the same vehicle. 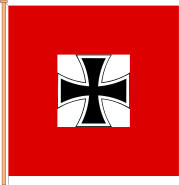 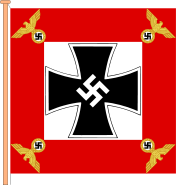 Flag for the Chief of the German Army General Staff

Flag for the Chief of the German Army General Staff

This special flag was introduced only on 1 September 1944. At this time the office was held by Generaloberst Heinz Guderian. Because of some violent disputes with Hitler he was sent on leave on 28 March 1945, only 38 days before the end of the war. So it came that this flag was closely associated with Guderian. The flag was similar in certain aspects to the flag used by the Commander-In-Chief of the German Army. The differences were that four golden eagles had been added to the corners of the flag. Moreover a white swastika was placed on the Iron Cross in the center of the flag.