The Oberkommando der Marine (OKM) was Nazi Germany's Naval High Command and the highest administrative and command authority of the Kriegsmarine. It was officially formed from the Marineleitung ("Naval Command") of the Reichswehr on 11 January 1936. In 1937 it was combined with the newly formed Seekriegsleitung (SKL). There were two major re-organisations, in November 1939 and May 1944.

The Commanders-in-Chief (Oberbefehlshaber der Marine, or OBdM for short) of the Kriegsmarine were:[1]

The OKM was broadly divided into six sections:

Flags of the Commander-in-Chief

On 7 November 1935 a decree was issued by Werner von Blomberg, the Reichskriegsminister and Commander-in-Chief of the German Armed Forces ordering the introduction of a new pattern of flag for use by the Commander-in-Chief of the Kriegsmarine. The flag consisted of a white square on which was displayed a large black Iron Cross. Placed behind it were two straight bladed unsheathed swords in bright yellow, crossed at right angles to each other. The flag was modified when on 1 April 1939 Erich Raeder rose to the rank of Großadmiral. The flag continued to be in use when Karl Dönitz came into this position on 30 January 1943. The swords were replaced by a pair of Admiral's batons crossed at right angles. Superimposed over both the crossed batons and the Iron Cross was a Wehrmachtsadler ("Armed Forces Eagle") in gold, facing towards the hoist. On 30 January 1943 a further special flag was introduced for Großadmiral Raeder in order to represent his position as Admiralinspekteur of the Kriegsmarine. It was in the same design as for the Commander-in-Chief of the Navy, but with the addition of a wide light blue border. 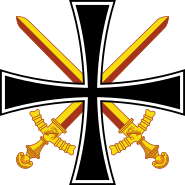 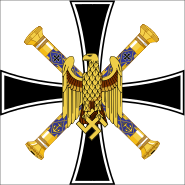