Novichok (Russian новичок: "Newcomer") is a series of nerve agents that were developed by the Soviet Union in the 1970s and 1980s[1] and allegedly the most deadly nerve agents ever made, with some variants possibly five to eight times more potent than VX, though this has never been proven.[2][3] They belong to "fourth generation chemical weapons" designed as a part of Soviet "Foliant" program.[4] Initially designated K-84 and later renamed A-230, the Novichok family of analogs comprises more than a hundred structural variants.[5] Of all the variants the most promising, from a military standpoint, was A-232 (Novichok-5).[6]

These agents were designed to achieve three objectives:

Although all these objectives were claimed to have been achieved, this is yet to be proven.

Some of these agents are binary weapons, in which precursors for the nerve agents are mixed in a munition to produce the agent just prior to its use. Because the precursors are generally significantly less hazardous than the agents themselves, this technique makes handling and transporting the munitions a great deal simpler. Additionally, precursors to the agents are usually much easier to stabilize than the agents themselves, so this technique also made it possible to increase the shelf life of the agents. However this has the disadvantage that careless preparation or preparation by untrained individuals may produce a non-optimal agent. During the 1980s and 1990s, binary versions of several Soviet agents were developed and are designated as "Novichok" agents (after the Russian word for "newcomer").

Extremely potent third-generation chemical weapons were developed in the Soviet Union and Russia from the 1970s until the early 1990s, according to a publication by two chemists, Lev Fedorov and Vil Mirzayanov in Moskovskiye Novosti weekly in 1992.[7] The publication appeared just on the eve of Russia's signing of the Chemical Weapons Convention. According to Mirzayanov, the Russian Military Chemical Complex (MCC) was using defense conversion money received from the West for development of a chemical warfare facility.[2][3] Mirzayanov made his disclosure out of environmental concerns. He was a head of a counter-intelligence department and performed measurements outside the chemical weapons facilities to make sure that foreign spies could not detect any traces of production. To his horror, the levels of deadly substances were 80 times greater than the maximum safe concentration.[3] (A full account by Mirzayanov is available online.[8])

The existence of Novichok agents was openly admitted by Russian military industrial complex authorities when they brought a treason case against Mirzayanov. According to expert witness testimonies prepared for the KGB by three scientists, novichok and other related chemical agents had indeed been produced and therefore the disclosure by Mirzayanov represented high treason.[9]

Vil Mirzayanov was arrested on October 22, 1992 and sent to Lefortovo prison for divulging state secrets. He was released later because "not one of the formulas or names of poisonous substances in the Moscow News article was new to the Soviet press, nor were locations ... of testing sites revealed."[3] According to Yevgenia Albats, "the real state secret revealed by Fyodorov and Mirzayanov was that generals had lied — and were still lying — to both the international community and their fellow citizens."[3] He now lives in the U.S.[10]

The first description of these agents was provided by Mirzayanov.[8] Dispersed in an ultra-fine powder instead of a gas or a vapor, they have unique qualities. A binary agent was then created that would mimic the same properties but would either be manufactured using materials legal under the CWT[10] or be undetectable by treaty regime inspections.[11] The most potent compounds from this family, novichok-5 and novichok-7, are supposedly around five to eight times more potent than VX.

One of the key manufacturing sites was a chemical research institute in what is now Uzbekistan,[11] and small, experimental batches of the weapons may have been tested on the nearby Ustyurt plateau.[11]

Two broad families of organophosphorus agents have been claimed to be Novichok agents. First are a group of organophosphorus compounds with an attached dihaloformaldoxime group, with the general formula shown below, where R = alkyl, alkoxy, alkylamino or fluorine and X = halogen (F, Cl, Br) or pseudohalogen such as C≡N. These compounds are extensively documented in Soviet literature of the time, but it is unclear whether they are all members of the potent "Novichok" compounds.[12][13][14][15][16][17][18][19]

Some examples of the first group of compounds reported in the literature are shown below, Novichok 5 is 3-chloro-2-methylpropyl ((chlorofluoromethylene)amino)oxyphosphonofluoridate (CAS 16415-09-1) and Novichok 7 is 3-chloro-2-methylbutyl((chlorofluoromethylene)amino)oxyphosphonofluoridate CAS 19952-57-9.[20] They are binary agents in which the appropriately substituted 2-methyl-1,3,2-dioxaphospholane[21] is reacted with dichlorofluoro(nitroso)methane (CAS 1495-28-9).[22] If the binary agents are reacted in advance, they are known as A-232 and A-234 respectively. Since neither of the 2 chemicals making the binary agent are controlled under the moratorium on nerve agents, it meant that the Soviet Union was not in breach of this moratorium. While neither of the precursors are common, they do find legitimate use in the chemical industry and so are commercially available. 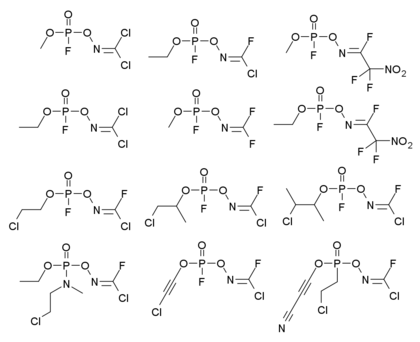 Mirzayanov gives somewhat different structures for Novichok agents in his autobiography, as shown below. He makes clear that a large number of compounds were made, and many of the less potent derivatives reported in the open literature as new organophosphate insecticides, so that the secret chemical weapons program could be disguised as legitimate pesticide research.[23]

As a nerve agent, Novichok belongs to organophosphate acetylcholinesterase inhibitors. These chemical compounds inhibit the enzyme acetylcholinesterase, preventing the normal breakdown of neurotransmitter acetylcholine. Acetylcholine concentrations then increase at neuromuscular junctions to cause involuntary contraction of all muscles. This then leads to respiratory and cardiac arrest and finally death. The use of a fast-acting peripheral anticholinergic drug such as Atropine could block the receptors where acetylcholine acts to prevent poisoning (as is the treatment for poisoning by other acetylcholinesterare inhibitors). This is however quite dangerous in itself.