The Northrop T-38 Talon is a two-seat, twin-engine supersonic jet trainer. It was the world's first supersonic trainer and is also the most produced. The T-38 remains in service as of 2013 in air forces throughout the world. The United States Air Force (USAF) is the largest operator of the T-38. In addition to training USAF pilots, the T-38 is used by NASA. The US Naval Test Pilot School is the principal US Navy operator (other T-38s were previously used as USN aggressor aircraft until replaced by the similar Northrop F-5 Tiger II). Pilots of other NATO nations fly the T-38 in joint training programs with USAF pilots.

The basic airframe was used for the light combat aircraft F-5 Freedom Fighter family. In the 1950s Northrop began studying lightweight and more affordable fighter designs. The company began with its single-engine Northrop N-102 Fang concept.[1] The N-102 was facing weight and cost growth, so the project was canceled and the company N-156 project was begun.[2]

Although the USAF had no need for a small fighter at the time, it became interested in the trainer as a replacement for the T-33 Shooting Star it was then using in that role. The first of three prototypes (designated YT-38) flew on 10 March 1959.[3] The type was quickly adopted and the first production examples were delivered in 1961, officially entering service on 17 March that year, complementing the T-37 primary jet trainer. When production ended in 1972, 1,187 T-38s had been built (plus two N-156T prototypes). Since its introduction, it is estimated that some 50,000 military pilots have trained on this aircraft. The USAF remains one of the few armed flying forces using dedicated supersonic final trainers, as most, such as the US Navy, use high subsonic trainers.[4]

The T-38 is of conventional configuration, with a small, low, long-chord wing, a single vertical stabilizer, and tricycle undercarriage. The aircraft seats a student pilot and instructor in tandem, and has intakes for its two turbojet engines at the wing roots. Its nimble performance has earned it the nickname white rocket. In 1962 the T-38 set absolute time-to-climb records for 3000, 6000, 9000 and 12000 meters, beating the records for those altitudes set by the F-104 in December 1958. (The F-4 beat the T-38's records less than a month later.)

The F-5B and F (which also derive from the N-156) can be distinguished from the T-38 by the wings; the wing of the T-38 meets the fuselage straight and ends square, while the F-5 has leading edge extensions near the wing roots and wingtip launch rails for air to air missiles. Under the paint the T-38 wing is constructed of honeycomb material while the wing of the F-5 family uses conventional skin over underlying support structure.

Most T-38s built were of the T-38A variant, but the USAF also had a small number of aircraft that had been converted for weapons training. These aircraft (designated AT-38B) had been fitted with a gunsight and could carry a gunpod, rockets, or bombs on a centerline pylon. In 2003, 562 T-38s were still operational with the USAF and are currently undergoing structural and avionics programs (T-38C) to extend their service life to 2020. Improvements include the addition of a HUD, GPS, INS (Inertial Navigation System), and TCAS as well as PMP (a propulsion modification to improve low-altitude engine thrust). Many USAF variants (T-38A and AT-38B) are being converted to the T-38C.

The fighter version of the N-156 was eventually selected for the US Military Assistance Program and produced as the F-5 Freedom Fighter. Many of these have since reverted to a weapons training role as various air forces have introduced newer types into service. The F-5G was an advanced single engine variant later renamed the F-20 Tigershark.

The USAF Strategic Air Command (SAC) had T-38 Talons in service from 1978 until SAC's inactivation in 1991. These aircraft were used to enhance the career development of bomber co-pilots through the "Accelerated Copilot Enrichment Program." They were later used as proficiency aircraft for all B-52 and B-1 pilots, as well as Lockheed SR-71, U-2, Boeing KC-135, and KC-10 pilots. SAC's successors, the Air Combat Command (ACC) and the Air Force Global Strike Command (AFGSC), continues to retain T-38s as proficiency aircraft for U-2 pilots and B-2 pilots, respectively.[4]

The Air Training Command's (ATC) successor, the Air Education and Training Command (AETC), uses the T-38C to prepare pilots for aircraft such as the F-15C Eagle and F-15E Strike Eagle, as well as the F-16 Fighting Falcon, B-52 Stratofortress, B-1B Lancer, B-2 Spirit, A-10 Thunderbolt, F-22 Raptor and F-35 Lightning II. The AETC received T-38Cs in 2001 as part of the Avionics Upgrade Program. The T-38Cs owned by the AETC have undergone propulsion modernization which replaces major engine components to enhance reliability and maintainability, and an engine inlet/injector modification to increase available takeoff thrust.[4] These upgrades and modifications, with the Pacer Classic program, should extend the service life of T-38s past 2020.

Besides the USAF, USN and NASA, other T-38 operators include the German Air Force (Luftwaffe), the Portuguese Air Force, the Republic of China Air Force, and the Turkish Air Force.[4]

NASA operates a fleet of 32 T-38 aircraft[5] and uses the aircraft as a jet trainer for its astronauts, as well as a chase plane. Its fleet is housed primarily at Ellington Field in Houston, Texas. NASA’s internal projections show the number of operational jet trainers falling to 16 by 2015. The agency spends between $25 million and $30 million annually to fly and maintain the T-38s.[6]

NASA's T-38s were involved in four separate fatal accidents in the 1960s and 1970s, and several non-fatal incidents.

In response to the 1973 OPEC oil embargo, from 1974 to 1983, the U.S. Air Force Thunderbirds aerobatic display team adopted the T-38 Talon, which used far less fuel than the F-4 Phantom. The Blue Angels downsized to the Douglas A-4 Skyhawk at roughly the same time. After the infamous 1982 "Diamond Crash" incident that killed four of the Thunderbirds' six demonstration pilots, the Talon was replaced in this role by the front line F-16A Fighting Falcon.

The T-X Program has been established to enable the United States Air Force to buy a new two-seat jet trainer for fast-jet training to replace the T-38. Aviation Week & Space Technology has written "there appears to be no rush to purchase T-38 replacements"; "the service is conducting an analysis of alternatives" with results "not expected to be ready until the Fiscal 2013 budget".[16]

According to the FAA there are seven privately owned T-38s in the U.S.[5] Boeing owns two T-38s, which it uses as chase planes.[5] Thornton Corporation owns three T-38s and three F-5s.[5] In addition, ILOAJP HOLDING and Wayne L. Siltanen own one each.[5] 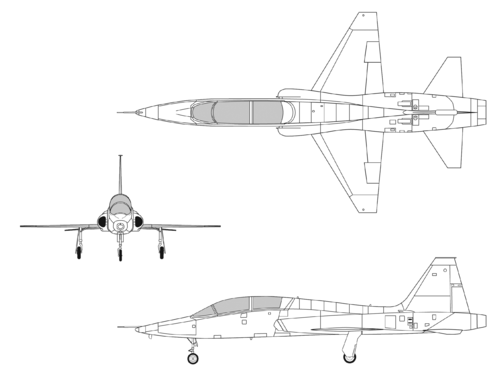