No. 1 Squadron is a Royal Australian Air Force (RAAF) squadron based at RAAF Amberley. The squadron is currently being re-equipped with F/A-18F Super Hornet multi-role fighters.

No. 1 Squadron was established as a unit of the Australian Flying Corps (AFC) at Point Cook, Victoria, on 1 January 1916 under the command of Lieutenant Colonel E H Reynolds. It sailed for Egypt in March 1916 and fought in the Palestine Campaign until the end of the war. In the desert, the Squadron flew B.E.2s, R.E.8s and Martinsyde G.100s/G.102s before re-equipping late in 1917 with Bristol Fighters. Its Commanding Officer in 1917–18 was Major Richard Williams, later to become known as the "Father of the RAAF".

On 22 and 24 November 1917 No. 1 Squadron AFC carried out aerial bombing on Bireh village during the Battle of Jerusalem. The squadron also supported the Capture of Jericho in February 1918.[2][3] The squadron carried out air raids and reconnoitred prior to the First Transjordan attack on Amman in March 1918 and prior to the Second Transjordan attack on Shunet Nimrin and Es Salt a month later. They also carried out reconnaissances during the advance to and fighting near Es Salt and the Jisr ed Damieh attack. During the last week of April 1918 the squadron moved its base forward from Mejdel to a new aerodrome outside Ramla.[4]

By October 1918 during the Final Offensive of the Palestine Campaign the Bristol Fighters of No. 1 Squadron had moved forward from Ramleh to Haifa and by the middle of the month were required to patrol and reconnoitre an exceptionally wide area of country, sometimes between 500 and 600 miles (800 and 970 km), flying over Rayak, Homs, Beirut, Tripoli, Hama, Aleppo, Killis and Alexandretta. They bombed the German aerodromes at Rayak on 2 October where 32 German machines, had been either abandoned or burnt. On 9 October five Bristol Fighters attacked with bombs and machine–guns, troops getting on trains at Homs railway station. A similar attack took place on 16 October when trains at Hama station were the target. On 19 October the first German aircraft seen in the air, since aerial fighting over Deraa on 16 and 17 September just prior to the beginning of the Battle of Sharon, a D.F.W. two–seater was forced to land. The aircraft was destroyed on the ground by firing a Very light into the aircraft after the German pilot and observer had moved to safety.[5][6]

Francis McNamara, later an air vice-marshal, was awarded the Victoria Cross for gallantry in action in effecting the rescue of a fellow flier.

The squadron became part of the RAAF upon its formation in 1921.

Following the outbreak of World War II, No. 1 Squadron was equipped with Lockheed Hudsons and deployed to Malaya in July 1940, for maritme patrol duties. Two hours before the Japanese attacks on Malaya started, Hudsons from the Squadron spotted the Japanese invasion fleet and later became the first aircraft to make an attack in the Pacific War, sinking a Japanese transport ship, the IJN Awazisan Maru and damaging two more transports, the Ayatosan Maru and Sakura Maru, off Kota Bharu, an hour before the attack on Pearl Harbor.[9][10] However, the squadron suffered severe losses in Malaya and the Netherlands East Indies Campaign. It was withdrawn to Australia in March 1942 and disbanded. 160 of the Squadron's personnel, however, were unable to escape from the NEI and were taken prisoner by the Japanese. Less than half of these men survived captivity.

No. 1 Squadron was re-formed on 1 December 1943 and conducted operations against Japanese forces in the Netherlands East Indies from Darwin, beginning in March 1944. After re-equipping with Mosquito light bombers in January 1945, the squadron deployed to Borneo where it operated from Labuan Island until the end of the war. No.1 Squadron returned to Australia in December 1945 and was disbanded at Narromine, New South Wales on 7 August 1946.

No. 1 Squadron was re-formed as a heavy bomber unit on 23 February 1948, when No. 12 Squadron was re-designated. From 1950–1958, it was based in Singapore, and its Avro Lincolns flew missions against communist guerrillas during the Malayan Emergency. Following its return to Australia in July 1958, the squadron was re-equipped with the Canberra jet bomber.

While 1 Sqn began converting to the F-111C in 1968, technical difficulties delayed delivery of the aircraft and, as an interim measure, the Squadron was equipped with the F-4 Phantom between 1970 and 1973. 1 Squadron operated F-111s in the low-level strike role following their arrival in Australia in 1973. While the squadron has not seen active service since the Malayan Emergency, it was placed on high alert during the early days of the Australian-led intervention in East Timor in 1999.

Lockheed Hudson aircraft of No. 1 Squadron under assembly at RAAF Station Richmond. The Hudson in the right foreground was flown by Flight Lieutenant John Lockwood. It was last seen "losing height with smoke pouring from one engine, and two Zeros following it down in close pursuit", during the Battle of Palembang.

Avro Lincoln bomber readied for the first operation by No. 1 Squadron from RAF Tengah, Singapore, August 1950. 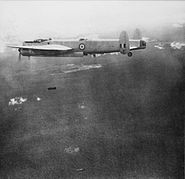