Nazi concentration camp badges, primarily triangles, were part of the system of identification in Nazi camps. They were used in the concentration camps in the Nazi-occupied countries to identify the reason the prisoners had been placed there.[1] The triangles were made of fabric and were sewn on jackets and trousers of the prisoners. These mandatory badges of shame had specific meanings indicated by their colour and shape. Such emblems helped guards assign tasks to the detainees: for example, a guard at a glance could see if someone were a convicted criminal (green patch) and thus likely of a "tough" temperament suitable for kapo duty. Someone with an "escape suspect" mark usually would not be assigned to work squads operating outside the camp fence. Someone wearing an F could be called upon to help translate guards' spoken instructions to a trainload of new arrivals from France. Some historical monuments quote the badge-imagery; the use of a triangle being a sort of visual shorthand to symbolize all camp victims. Also, the modern day use of a pink triangle emblem to symbolize gay rights is a response to the camp identification patches.

The system of badges varied between the camps, and in the later stages of World War II, the use of badges dwindled in some camps, and became increasingly accidental in others. The following description is based on the badge coding system used before and during the early stages of the war in the Dachau concentration camp, which had one of the more elaborate coding systems.

Shape was chosen by analogy with the common triangular road hazard signs in Germany that denote warnings to motorists. Here, a triangle is called inverted because its base is up while one of its angles points down.

People who wore the green and pink triangles were convicted in criminal courts and may have been transferred to the criminal prison systems after the camps were liberated.

Some period examples of the single triangle design at Nazi camps

Red emblems of a political enemy on a Dachau detainee's clothing. ^

Liberated Neuengamme survivor standing on the right has a triangle patch with a top-bar.

Like those who wore pink and green triangles, people in the bottom two categories would have been convicted in criminal courts.

Some period examples of the double triangle design at Nazi camps

Sachsenhausen detainee with glasses in the foreground wears a two-color ID-emblem.

Part of a Dachau roll call—badges visible on detainees.

Also, repeated offenders would receive bars over their stars or triangles, a different colour for a different crime.

Many various markings and combinations existed. A prisoner would usually have at least two, and possibly more than six.

Penal battalion, penal company, etc., are military units consisting of convicted persons for which military service was either the assigned punishment or a voluntary replacement of imprisonment.

Detainees wearing civilian clothing (more common later in the war) instead of the striped uniforms were often marked with a prominent X on the back.[9] This made for an ersatz prisoner uniform. For permanence, such Xs were made with white oil paint, with sewn-on cloth strips, or were cut (with underlying jacket-liner fabric providing the contrasting color). Detainees would be compelled to sew their number and (if applicable) a triangle emblem onto the fronts of such X-ed clothing.[10]

Some period examples of nationality-letter marking at Nazi camps

Dutch Jews wearing a yellow star and the letter N for Niederländer at Buchenwald.

Emblems were also used on some detainee ID-cards—here, on the Mauthausen card of Polish scientist Jerzy Kaźmirkiewicz, a P-triangle appears. ^

Dachau survivors toast their liberation. The man standing in center between the bottles wears a P triangle. 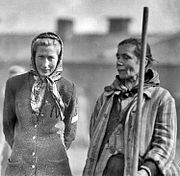 Liberated Bergen-Belsen survivor with (left) a late war ersatz variant: no cloth patch, but a prominent N marked on the outer clothes.

Triangle-motifs appear on many postwar memorials to the victims of the Nazis. Most triangles are plain while some others bear nationality-letters. The otherwise potentially puzzling designs are a direct reference to the identification patches used in the camps. On such monuments, typically an inverted (point down, base up) triangle (especially if red) evokes all victims, including also the non-Jewish victims like Slavs, Poles, communists, gays, Roma (see Porajmos), the handicapped (see Action T4), and Soviet POWs. An inverted triangle colored pink would symbolize gay male victims. A non-inverted (base down, point up) triangle and/or a yellow triangle is generally more evocative of the Jewish victims.

Some examples of camp triangle emblems on monuments and related uses

A Dora Todesmarsch (death march) roadside tablet marked only with the date and a red triangle.

On the Klooga Jewish victims' memorial.

Monument (in the village of Grabow-Below) for Ravensbrück death march victims.

On a Wöbbelin memorial stone.

Boulder (in Lindenring) "for 2000 women" victims of Ravensbrück.

On a Cap Arconia incident memorial. 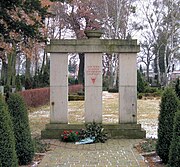 At the Neustadt-Glewe concentration camp memorial.

On a Langenstein-Zwieberge memorial (pictured on an East German stamp).

On a monument to Neuengamme victims in Hamburg. The letters KZ are not nationality-letters but rather are the German abbreviation for Konzentrationslager (concentration camp).

On a memorial to victims killed at Genshagen (right panel). The letters KZ are not nationality-letters but rather are the German abbreviation for Konzentrationslager (concentration camp).

P-triangle on the Polish medal for camp victims.

Various badges on a Dachau memorial. ^