Some 44,000 Native Americans served in the United States military during World War II.[1] For every one drafted, one and a half volunteered; American Indian participation in the war per capita exceeded any other group.[2] By 1940, a large fraction of American Indians lived off reservations; their experiences in the war mirrored the general population. Of special interest was the enormous impact the war had on Indians living on reservations, mostly in remote western areas. The war meant the draft for young men, and high paying war jobs in far-away cities for others. Most of those who left the reservations did not permanently return there after the war.[3]

The young men who were drafted served in integrated units. For the first time they got to know whites of diverse backgrounds and were given technical training in the many skills needed by the military. Their fellow soldiers often held them in high esteem, in part since the legend of the tough Indian warrior had become a part of the fabric of American historical legend. White servicemen sometimes showed a lighthearted respect toward American Indian comrades by calling them "chief".[citation needed]

The resulting increase in contact with the world outside of the reservation system brought profound changes to American Indian culture. "The war", said the U.S. Indian commissioner in 1945, "caused the greatest disruption of Indian life since the beginning of the reservation era", affecting the habits, views, and economic well-being of tribal members.[4] The most significant of these changes was the opportunity — as a result of wartime labor shortages — to find well-paying work.

American Indian veterans encountered varying degrees of success in re-entering civilian life after World War II. Some returned to the reservation, where economic opportunities were bleak. The Navajo viewed their veterans as a positive force, whose service and contact in the war portended progress for the tribe. Veterans received readjustment checks of $20 a week for 52 weeks while unemployed, and were eligible for G.I. Bill benefits, including free high school and college education, and low-cost mortgages. Veterans moved to cities; the Indian population in urban centers more than doubled (from 24,000 to 56,000) from 1941 to 1950. Some veterans, like Abel in the novel House Made of Dawn, moved to California cities only to experience little success there. More than three thousand Indians each lived in San Francisco and Los Angeles after the war; fewer than five hundred, or a sixth of them, were able to find steady jobs. Tellingly, the median income for urban male Indians was $1,198 a year, in contrast to $3,780 for the white male population.

In California, many of the "Urban Indians" came from the Apache, Hopi and O'odham nations in Arizona and New Mexico; others came from Oklahoma. New York city attracted Iroquois from upstate New York. Tens of thousands of Indians live in major cities including Chicago, Cleveland, Denver, Houston, Kansas City, Minneapolis, Phoenix and Seattle.

Apaches assisting in the unloading of beds for Japanese internees at the Poston War Relocation Center on April 29, 1942. 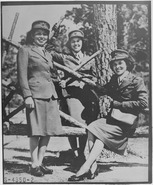 Native American women as Marine Corps Reservists at Camp Lejeune in 1943. The women here represent the Blackfeet, the Potawatomi, and the Ojibwe.

Private First Class Ira Hayes, who was an Akimel O'odham, preparing to parachute out of an aircraft in 1943.

Lieutenant Woody J. Cochran, a Cherokee Indian and bomber pilot, holding up a captured Japanese flag during the New Guinea campaign on April 1, 1943.

Lieutenant Ernest Childers, a Muscogee, being congratulated by General Jacob L. Devers shortly after receiving the Congressional Medal of Honor in 1944. 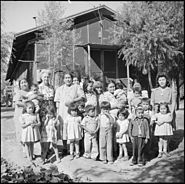 Hopi Indians at the Poston Center in September 1945, after it was turned over to the Colorado River Indian Reservation.

Dan Akee, a code talker from the Navajo Nation.