The National War Memorial (also known as The Response), is a tall granite cenotaph with acreted bronze sculptures, that stands in Confederation Square, Ottawa, and serves as the federal war memorial for Canada.[1]

Originally built to commemorate the First World War, in 1982 it was rededicated to include the Second World War and the Korean War. In 2000, the Canadian Tomb of the Unknown Soldier was added to the memorial site and symbolizes the sacrifice made by every Canadian who has died or may yet die for their country.

A competition was held in 1925 to seek designs for a national war memorial to be dedicated to the First World War. Entrants were limited to residents of the British Empire who were British subjects, or who were citizens of allied nations. The competition received 127 entries, of which seven were asked to provide scale models for final judging.[2] The winner, announced in January 1926, was Vernon March, from Farnborough, United Kingdom. His theme was to represent the response of Canada to war, symbolised by service people from all disciplines marching through a triumphal arch, but with a deliberate aim to avoid the glorification of war.[2]

Symbolically, two 5.33-metre-high (17.5 ft) allegories of peace and freedom stand at the apex of the arch, their proximity to each other representing the inseparability of the two concepts, under which the depictions of 22 Canadian service-men, from all branches of the forces engaged in the First World War in historically correct uniforms, move towards the call of duty. To avoid foreshortening from a pedestrian viewpoint, the group of figures is placed at a specific height above street level; each body is approximately 2.4 metres (7.9 ft) high. At the front are infantrymen; to the left a Lewis gunner, to the right a kilted soldier with a Vickers machine gun. Following these are a pilot in full gear, an air mechanic, and a sailor. Both a cavalryman and a mounted artilleryman are emerging from the arch, side by side, followed by two riflemen pressing through the arch, and behind them are the men and women of the support services, including nurses, a stretcher bearer, and a lumberman. All of these are affixed to a pedestal executed in rose-grey Canadian granite from the Dumas Quarry at Rivière-à-Pierre, Quebec.[2]

Work began in 1926 under the auspices of the Dominion's Department of Public Works. March was assisted by his six brothers and his sister, all of whom completed the work after March's death in 1930.[3] The sculptures were first produced in clay, from which moulds were made, and the bronze was then cast in the Marchs' foundry; this work was finished in July 1932, and after a period on display in Hyde Park, London, and in storage in the foundry, they were relocated to Ottawa in 1937.[2]

The contract for the construction of the arch was awarded in December 1937 and the entire cenotaph was completed on 19 October 1938, after which the landscaping surrounding the memorial was laid out by Jacques Greber, and installed by Toronto contractors.[2] On 15 May 1939, the Post Office Department issued a stamp called National Memorial, designed by Herman Herbert Schwartz based on a picture engraved by Joseph Keller.[4]

On 21 May, the memorial was officially unveiled by George VI, king of Canada, in the presence of an estimated 100,000 people, months before the Second World War began.[2]

The memorial features 23 bronze figures, representing people who fought in the First World War, emerging from a memorial arch, moving from war into peace. Overhead, winged figures symbolize peace and liberty. The dates commemorating the Second World War (1939–1945) and the Korean War (1950–1953) were added in 1982. Canada's Unknown Soldier, who fell in France in 1917 and was originally buried in that country, was exhumed and re-buried at the base of the memorial before Governor General Adrienne Clarkson, veterans, and other dignitaries and a large crowd on 28 May 2000.

Located on the upper plaza, in front of the existing National War Memorial monument, a dark Caledonia granite sarcophagus 12 feet long, 8 feet wide, and 3 feet high encloses a coffin containing the remains of the unknown soldier. A bronze relief sculpture is secured to the top with stainless steel pins. The four corner pieces of the sarcophagus also feature bronze relief work. The unidentified soldier was selected from a cemetery in the vicinity of Vimy Ridge, the site of a famous Canadian battle of the First World War. The Tomb of the Unknown Soldier was created to honour the more than 116,000 Canadians, whether they be navy, army, air force or merchant marine, who died or may die for their country in all conflicts – past, present, and future.

A national scandal arose following Canada Day, 2006, when a group of young men were photographed urinating on the memorial at night, after celebrating the national holiday.[5] Two teenagers later issued apologies and undertook community service, while another man, Stephen Fernandes, 23, of Montreal was charged by Detective Michael Walker of the Ottawa Police Service with mischief,[6] but later claimed to have no memory of the incident.[7] This incident prompted the establishment of a Guard of Honour at the site, though the soldiers of the Ceremonial Guard are only present between 9 am and 5 pm from June through August. The navy and the air force also do rotations here in the summer months. The National Capital Commission and Veterans' Affairs also fund summer students at the site who are hired to provide site and historical information.

The National War Memorial is the site of the nationally televised Remembrance Day ceremony every year on 11 November. Along with Canadian war veterans, the ceremony is attended by the governor general, his or her prime minister, other important members of the government and other groups and organizations, and sometimes members of the Canadian Royal Family. The ceremony includes the placing of wreaths by representatives of various groups, such as veterans, the House of Commons, and the youth of Canada.

Whenever the monarch or another member of the Royal Family is in Ottawa, they will, regardless of the date, lay a wreath at the monument. Other prominent dignitaries who have laid wreaths at the memorial include President of the United States John F. Kennedy in 1961 and Soviet leader Mikhail Gorbachev in 1990.

Design and thematic elements of the National War Memorial 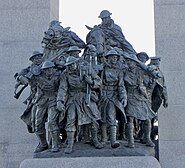 The 23 bronze figures, representing the eleven branches of the Canadian forces engaged in the First World War, viewed from the front

The bronze figures viewed from the rear, with a close-up of the base of the Canadian granite arch

Detail of the bronze figures at the front of the memorial, viewed from the side

The memorial viewed from the side, as the figures emerge through the arch from war to peace

The Canadian Tomb of the Unknown Soldier at the base of the memorial, with Guard of Honour