The Nanjing Military Region (南京军区, nánjīng jūnqū) is one of seven military command regions for the Chinese People's Liberation Army. Its jurisdiction covers all military and armed police located in Anhui, Jiangsu, Zhejiang, Jiangxi, Fujian, and Shanghai. It also covers Taiwan, which is claimed by the People's Republic of China but administered by the Republic of China. The current head of the region is Zhao Keshi. The International Institute for Strategic Studies lists the formation with an estimated 250,000 personnel, three group armies, two armoured, one mechanised infantry, three motorised infantry, and one artillery division. There are also one armoured, four motorised infantry, two artillery, three anti-aircraft brigades, plus an anti-tank regiment.

The headquarters for the East Sea Fleet are located within the region, at Ningbo. 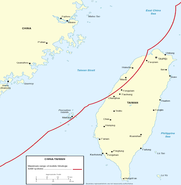