Namer (Hebrew: נמ"ר‎, pronounced [nameʁ], means "leopard" and also a syllabic abbreviation of "Nagmash" (APC) and "Merkava") is an Israeli armored personnel carrier based on a Merkava tank chassis.[5] Namer was developed by and is being assembled by the Israeli Ordnance Corps. It has entered service in limited numbers with the Israel Defense Forces since summer 2008. 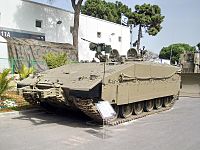 Namer prototype based on Merkava Mark I. Notice the straight side of the hull.

Operational Namer based on Merkava Mark IV. Notice the sloped side of the hull.

The experience of converting Centurion tanks into armored personnel carriers (Nagmashot, Nagmachon) and combat engineering vehicles (Puma, Nakpadon), followed by the successful conversion of many T-54 and T-55 tanks into Achzarit infantry fighting vehicles pushed the idea of converting Merkava tanks into heavily armored APCs / IFVs. The concept held great promise, because many of the 250 Merkava Mark Is were being gradually withdrawn from service and it was also made clear that the 105 mm armament of the Merkava Mark IIs could not be upgraded to the more modern IMI 120 mm gun.

The development did not progress much in the 1990s due to lack of funds, but following 2004 Israel–Gaza conflict, which exposed the vulnerability of the M113 armored personnel carrier to improvised explosive devices and rocket-propelled grenades, the IDF re-opened the development.[6] At that point domestic production of Namer was preferred over purchasing the Stryker armored personnel carrier.[7]

On 15 February 2005, Maariv reported that a running Namer prototype based on the Merkava Mark I was fielded by the Givati Brigade for trials and evaluation. It was equipped with a Rafael Overhead Weapon Station, which is remotely controlled and loaded from within the vehicle. This same unit was demonstrated at the Eurosatory 2005 military exhibition where prospective export customers showed interest.

Lessons learned in the battles of the 2006 Lebanon War also largely validated this program. Consequently, in 2007 it was reported[9] that the first fifteen Namers would be delivered in 2008, and over a hundred more would finally equip two combat brigades. However, conversion plans were abandoned in favor of newly built Merkava Mark IV chassis.

On 1 March 2008, an operational, started from scratch and fully developed Namer IFV based on Merkava Mark IV chassis was officially presented by the IDF.[10] Reportedly, the construction was expedited on May 2008 by importing parts from the US.[11] On September 15, 2008, the Namer was unveiled to the general public at an exhibition in Rishon LeZion.

On 25 October 2010, it was announced that General Dynamics Land Systems had been chosen to negotiate a contract to manufacture and integrate an unspecified number of vehicle hulls at the Joint Systems Manufacturing Center in Lima, Ohio.[12]

Namer has been designed for survivability and rapid repair, with modular armor, V-shaped belly armor pack, and NBC protection. According to Brigadier general Yaron Livnat, “The weight saved by eliminating the turret was ‘reinvested’ in beefing up the armor... this has resulted, with Namer having better protected from belly charges".[13] It is also ready to be equipped with an active protection system. As of June 2009, the IDF approved the acquisition of Israel Military Industries' Iron Fist active protection system for the Namer.[14]

Namer is capable of maneuvering in difficult terrain, powered by the Teledyne Continental AVDS-1790-9AR 1,200 hp (895 kW) V12 air-cooled diesel engine of the Merkava Mark III. Namer is able to carry up to 12 troops (crewmen and fully equipped infantrymen) and one stretcher, or two stretchers and medical equipment on a Namerbulance MEDEVAC version.[16] The original Merkava Mark IV rear entrance was redesigned to be a wider door ramp with a sniper port. Two hatches are fitted on the roof, which is higher than Merkava's hull roof. Namer also shares a digital battlefield management system with Merkava Mark IV.

The Golani Brigade was the first to acquire the Namer. According to IDF, the Namer IFV is set be distributed to infantry and combat engineering forces, with possible future plans for special models for intelligence and command purposes.[17] Two Namers took part in the Gaza War as part of the Golani Brigade.[18]

Azerbaijan and Israel have conducted negotiations over the Namer vehicle.[19]

Israel has offered procurement of Namer APCs to Colombia.[20]

The US Army conducted non-developmental vehicle operational assessments of current combat vehicles in 2012 to evaluate capabilities against requirements for purchase of a new IFV for the Ground Combat Vehicle program. One of the vehicles validated was the Namer.[21] On 2 April 2013, the Congressional Budget Office released a report that advised purchasing current vehicles instead of developing a new vehicle for the GCV program. Buying the Namer would cost $9 billion less, and met the required nine-man carrying capacity.[22] The army responded by saying that although the Namer and other vehicles assessed in 2012 met some GCV requirements, no currently fielded vehicle met enough without needing significant redesign.[23]