Military Wiki
Register
Don't have an account?
Sign In
Advertisement
in: Pages with broken file links, Articles incorporating text from Wikipedia, Historical societies of the United States,
and 7 more

Museum of the American Revolution

The museum owns a distinguished collection of several thousand objects including artwork and sculpture, textiles and weapons, manuscripts and rare books. Permanent and special exhibition gallieries, theaters and large-scale tableaux will bring to life the original "greatest generation," and engage people in the history and continuing relevance of the American Revolution. The museum expects to serve 500,000 tourists, regional visitors and students annually. It will serve as a portal to Philadelphia's other Revolutionary landmarks, enriching the existing heritage community and making Philadelphia an engaging and authentic destination for those interested in discovering America's founding.

The President and CEO is Michael C. Quinn and Philadelphia area media entrepreneur and philanthropist H.F. “Gerry” Lenfest serves as Chairman of the Board of Directors.[2]

The museum will be located in the historic heart of Philadelphia, the city that served as the headquarters of American's founding. The site is across the street from the First Bank of the United States and two blocks from Independence Hall, the National Constitution Center, Second Bank of the United States, American Philosophical Society, Carpenters' Hall, and the Liberty Bell.

On June 12, 2012, architect Robert A. M. Stern unveiled designs for the permanent location.[3] Groundbreaking for the museum occurred in fall 2014 and construction is underway. The museum will rise three stories above the street and, with a full basement, will encompass 118,000 total square feet. The design plans for the building include a museum shop and café which opens to the sidewalk. The first floor interior is organized around a skylit central interior court and features a cross-vaulted ticketing lobby, a multi-use theater and a changing exhibition gallery. The second floor features 18,000 square feet of galleries and a theater dedicated to the exhibition of George Washington's marquee tent. The museum's third floor is designed to offer rooms for events and two terraces overlooking the First Bank of the United States, Independence National Historical Park, and the Philadelphia skyline beyond. The museum intends to seek Leadership in Energy and Environmental Design (LEED) Silver certification.[4]

The experience will take visitors on a chronological journey from the roots of conflict in the 1760s to the rise of armed resistance, and from the bold Declaration of Independence of 1776 through the long years of warfare that achieved victory. Whether stepping into an Oneida Indian council house, or examing the 1773 volume "Poems on Various Subjects" by Phyllis Wheatley, America's first published black female poet, museum visitors will see the diversity of people and opinion of the American founding. Immersive experiences include a gallery featuring a full-scale replica of Boston's Libery Tree, the recreation of an Oneida Indian Council House, the Battlefield Theater, a recreation of Independence Hall, and a large model of an 18th-century privateer ship. A dedicated theater will house one of the most iconic surviving artifacts of the Revolution: General Washington's Headquarters Tent, which served as both his office and sleeping quarters throughout much of the war. The Museum's Director of Collections and Exhibitions, Dr. R. Scott Stephenson, is working with a team of specialists to develop more than 32,000 square feet of exhibits and theaters, plus integrated educational space. He holds an M.A. and Ph.D. in American History from the University of Virginia. Dr. Stephenson is a specialist in colonial and revolutionary American history and material culture with a strong background in visual storytelling. Also supporting the exhibition process is Dr. Philip C. Mead. He holds an M.A. and Ph.D. in American History from Harvard University. Other historians who have been consulted on the project include: Richard Beeman (University of Pennsylvania), Vincent Brown (Harvard University), Thomas Chavez (National Hispanic Cultural Center), Thomas Fleming (writer and novelist), James Hattendorf (US Naval War College), Don Higginbotham (University of North Carolina), Pauline Maier (Massachusetts Institute of Technology), Holly Mayer (Duquesne University), Thomas McGuire (Malvern Preparatory School), David McCullough (Yale University), Gary Nash (University of California, LA), Ray Raphael (University of California, Berkeley), Matthew Spooner (Columbia University), Laruel Ulrich (Harvard University), and Gordon Wood (Brown University).

The Museum of the American Revolution has a rich collection of several thousand objects. The museum's collection includes items owned and used by General George Washington during the War of Independence, an extensive collection of historic firearms and edged weapons, important art, important manuscripts, and rare books.

Much of the collection is in storage awaiting display in the Museum of the American Revolution. Some items have been displayed at George Washington's Mount Vernon, Valley Forge National Historical Park, the National Constitution Center, the Winterthur Museum, the Senator John Heinz History Center and the North Carolina Museum of History. [6]

Selections from the Collection[]

First newspaper printing of the Declaration of Independence (1776) 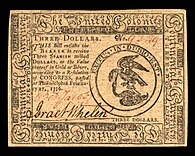 Resolved, That the Senate –– (1) recognizes the contribution of the Center to the preservation of the story of the founding of the United States; and (2) expresses its support for the Center’s efforts to establish an appropriate museum to tell such story to future generations.