Military Wiki
Register
Don't have an account?
Sign In
Advertisement
in: Articles with French-language external links, Articles incorporating text from Wikipedia, Museums established in the 20th century,
and 6 more

The Musée de l'Armée (Army Museum) is a national military museum of France located at Les Invalides in the 7th arrondissement of Paris. It is served by Paris Métro stations Invalides, Varenne, and La Tour-Maubourg.

The Musée de l'Armée was created in 1905 with the merger of the Musée d'Artillerie and the Musée Historique de l'Armée.[1] The museum's seven main spaces and departments contain collections that span the period from antiquity through the 20th century.

The Musée de l'Armée was created in 1905 with the merger of the Musée d'Artillerie and the Musée Historique de l'Armée.[1] The Musée de l'artillerie (Museum of Artillery - "artillerie" meaning all things related to weapons) was founded in 1795 in the aftermath of the French Revolution,and expanded under Napoleon. It was moved into the Hôtel des Invalides in 1871, immediately following the Franco-Prussian War and the proclamation of the Third Republic. Another institution called the Musée historique de l'Armée (Historical Museum of the Army) was created in 1896 following the Paris World Fair. The two institutions merged in 1905 within the space of the former Musée de l'Artillerie. Today, it holds 500,000 artifacts, including weapons, armor, artillery, uniforms, emblems and paintings, exhibited in an area of 12,000 m². The permanent collections are organized into "historical collections", representing a chronological tour from ancient times through the end of World War II.

In March 1878, the museum hosted an "ethnographic exhibition", as it was called, which represented the main "types" of Oceania, America, Asia and Africa. Dummies representing people from the colonies, along with weapons and equipment, were the main attraction. The exhibit, organized by Colonel Le Clerc, attempted to demonstrate theories of unilineal evolution, putting the European man at the apex of human history.[2] Parts of this collection began to be transferred to the Ethnographic Museum of the Trocadéro in 1910 and in 1917; the last colonial rooms were closed just after the 1931 Paris Colonial Exhibition.[2] All remnants were transferred after the Second World War.[2]

The Main Courtyard is the center of the Hôtel National des Invalides and displays a large part of the artillery collections, gathered during the French Revolution. The collection traces 200 years of the history of French field artillery and enables visitors to discover how the equipment was manufactured, its role and the history of great French artillerymen.[3] Contains:

The Musée de l'Armée has a rich ancient collection, which makes it one of the three largest arms museums in the world.[4] Contains:

This department covers the military, political, social and industrial history of France, reliving great battles, exploring the lives of soldiers, and tracing the development of technologies and tactics.[5] Contains:

The Dôme des Invalides is the emblem of the Hôtel National des Invalides and an unmissable monument in the Parisian landscape.[6] Contains:

The contemporary department tells the story of the French Army from 1871 to 1945, and the two great conflicts of the 20th century.[7] Contains:

The Charles de Gaulle Monument is an interactive multimedia space dedicated the work of Charles de Gaulle, the leader of the Free French Forces and founding President of the Fifth Republic.[8] Contains:

In 1676, the Secretary of State for War, Marquis de Louvois, entrusted the young architect Jules Hardouin-Mansart with the construction of the chapel, which Libéral Bruant had been unable to complete. The architect designed a building which combined a royal chapel, the "Dôme des Invalides", and a veterans' chapel.[9] This way, the King and his soldiers could attend mass simultaneously, while entering the place of worship though different entrances, as prescribed by etiquette. This separation was reinforced in the 19th century with the erection of the tomb of Napoleon I, the creation of the two separate altars and then with the construction of a glass wall between the two chapels.[9]

The Musée de l'Armée has identified 24 aesthetic, technical and symbolic "treasures," which are all closely linked to French military history from the late Middle Ages through World War II. They include weapons, armor, works of arts and technology.[10]

Model of Château-d'Oléron in the Musée des Plans-Reliefs (1703) 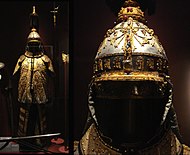 Painting of the Battle of Magenta (1859)

Pith helmet worn by soldiers in the army of Ranavalona III

Baton of a Marshal of France (20th century)