The MOWAG Eagle is a wheeled armored vehicle designed by the Swiss MOWAG corporation. It has gone through several generations of development. The current vehicle, introduced in November 2003, is the Eagle IV, which is based on the Duro IIIP chassis.[1] The original MOWAG Eagle used the chassis and running gear of the American Humvee, while the Eagle II and Eagle III use the chassis and running gear of the Humvee ECV.[2] A Prototype is now part of the Military Museum Full / Fort Reuenthal.

A modular 6x6 variant that was developed for an Australian Army tender made its market debut at Eurostatory 2012. 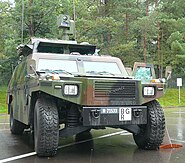 Eagle IV: side view as used by the German Army