The Mortier de 280 modèle 1914 Schneider was a French siege howitzer, manufactured in small numbers by the Schneider et Cie company, used during World War I. Used primarily by France, fewer than forty were sold to Russia and took part in the fighting on the Eastern Front, the Russian Civil War and the subsequent Polish-Bolshevik War. In Imperial Russia it was initially known as 11 inch siege mortar model 1912 (Russian: 11 дм. осадная мортира обр. 1912 г.), but later the more common name became 280 mm Schneider Mortar Model 1914/15 (Russian: 280-мм мортира Шнейдера образца 1914/15 гг.). The 1914 and 1915 model years referred to the dates of delivery from France. The US M1918 240 mm Howitzer is a copy of the Schneider howitzer in the 240 mm caliber, but did not reach production till after the end of the war.

The Mortier de 280 mle 1914 Schneider was a siege howitzer of conventional design for its time. It used a hydro-pneumatic system to absorb the recoil forces generated when firing. The box carriage was mounted on a firing platform and only allowed 20° of traverse. One unusual feature was the presence of two large steel pads mounted on swinging outriggers at the rear of the firing platform, possibly to reduce movement of the platform when firing at low angles. A pit needed to be dug underneath the breech for very high-angle firing. It had an interrupted-screw breech, probably with a deBange obturator, and used bagged propellant. Shells were loaded onto the ammunition trolley that ran on rails behind the breech using the on-board crane and the trolley was moved adjacent to the breech after it had been brought back to the proper angle for loading. It had a crew of 12 men and fired a 205 kilograms (452 lb) high-explosive shell to a range of 10,950 metres (11,980 yd). It was dismantled into four loads, barrel, cradle, carriage and firing platform, for transport and carried on 4 horse-drawn carts.[1]

French weapons fought throughout World War I and were still in the inventory at the beginning of World War II. Four were used with success in June 1940 by French army against the Chaberton Italian battery. Some were used by the Germans, designated as 28 cm Mrs. 601 (f), after the Battle of France. One case was during the Siege of Leningrad in 1943—44.[1]

In Russian service they saw action on the Eastern Front, during the Russian Civil War and the subsequent Polish-Bolshevik War. Some were captured by Poland during that conflict, although nothing is known of any use by them. In June, 1941 the Red Army still possessed 25 of these guns.[2]

In use by German troops on Eastern Front, January 1944

The howitzer disassembled on its 4 transport carts 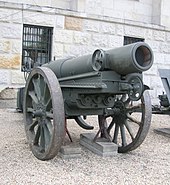