The Mk 2 defensive hand grenade (sometimes written Mk II) is a fragmentation hand grenade used by the U.S. armed forces during World War II and in later conflicts including the Vietnam War. The Mk II was introduced in 1918, replacing the failed Mk I of 1917, and was standardized in 1920. On 2 April 1945, the Mk II was redesignated the Mk 2.

The Mk.2 was replaced by the M26-series (M26/M61/M57) and later M33 series (M33/M67). It was phased out gradually in service beginning with the Korean War. Due to the tremendous quantity manufactured during World War 2, it was in limited standard issue with the US Army and US Marine Corps throughout the 1950s and 1960s. The U.S. Navy was one of the last users when it was discontinued in the 1970s.

The Mk II was manufactured with grooves in the cast iron. This is erroneously believed to aid fragmentation but additionally provided for a better grip when throwing the grenade. This gave it the appearance of pineapple fruit, giving it the common nickname of the "pineapple" grenade. It was also commonly referred to as a "frag" grenade - as opposed to the Mk.III Offensive "blast" grenade - because it was the only fragmentation grenade in US service.

The original Mk II grenade had a 3/8" threaded base plug in its base. This was designed to place the explosive filling. The product-improved "Mk IIA1" introduced in 1942 lacked the bottom filler hole of the Mk II and was filled through the fuse well. (Note: The term "Mk. IIA1" is used informally by armorers, historians, and collectors but was never officially used as a nomenclature by the US military.[1])

Mk. II grenades were filled with EC blank fire (smokeless firearm) powder. It produced an adequate amount of fragmentation and did away with the need of a detonator. The detonator was initially replaced by a small length of safety fuse terminated with a black powder igniter charge. Production grenades with the EC powder filler used the M10 series of igniting fuse.

TNT was used in some Mk. II models but it had a tendency to over-fragment the cast iron body. Pre-war Mk. IIs with a TNT filler were identified with an all-yellow body as a warning to users. Wartime grenades were repainted olive drab for camouflage purposes with a narrow yellow band below the fuse. Repainted grenades usually lacked the yellow band.

The Mk. II used the M5, M6, and M10 series fuses. These early fuses made a loud "bang" and produced sparks when activated. They had other problems as well. The M10-series' powder train made a "hissing" sound as it burned, potentially alerting the enemy of its presence. The M5 and M6 series sometimes prematurely detonated when the flash from the primer hit the TNT charge rather than the delay fuse. Moisture could get in under the foil fuse cap, causing the weapon to fail to detonate. Improved smokeless and (almost) silent fuses (like the M204-series) were later fitted after World War 2.

Mk. II Grenades came 25 to a wooden crate and were shipped in fiberboard packing tubes. TNT grenades, like all High Explosive devices, were shipped unfused to prevent premature detonation. Their fuses were shipped separately and came in flat cardboard boxes of 25. EC Powder grenades were shipped with their fuses attached. 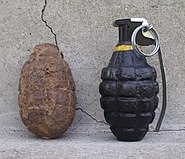