The MK 26 Guided Missile Launching System (GMLS) was a US Navy fully automated system that stows, handles, and launches a variety of missiles. The system supported RIM-66 Standard, RUR-5 ASROC, and potentially other weapons.[1] The Mk 26 had the shortest reaction time and the fastest firing rate of any comparable dual arm shipboard launching system at the time. With only one man at the control console, a weapon can be selected, hoisted to the guide arm, and launched. Several mods (0 to 5) provided magazine capabilities of 24 to 64 missiles.[2]

The Mk 26 was installed aboard Virginia class cruisers, Kidd class destroyers and the early Ticonderoga class cruiser.[3] It was one of the last rail-based missile launchers used by the US Navy. The system was deployed in limited numbers due to the advent of the Mk 41 Vertical Launching System, only the first five of twenty-seven Ticonderoga cruisers carried the Mk 26. With the Mk 26, two missiles could be on the rails and it could sustain a 9 second firing rate with a one second salvo delay.[2] This was faster than prior launchers that required manually winging and finning of the missiles prior to loading on the rail. However, with the Mk 41 VLS, any missile could be on standby to fire at a given time with a faster firing rate.

The VLS system design size also permitted the carrying of larger missiles like the Tomahawk missile and extended range Standard Missiles which are around 21 feet (6.4 m) long with boosters. The Mk 26 was limited to 16.6 feet (5.1 m) maximum missile length.[4] The 61 cell Mk 41 VLS also exceeded the Mk 26 mod 5 capacity of 44 missiles for Aegis cruisers. From a maintenance standpoint, VLS has fewer moving parts than the Mk 26 and is thus less prone to failure. It also has 360 degree coverage, while the Mk 26 would be limited by the ship's structure. For example, a forward Mk 26 launcher could not shoot at a target aft of the ship due to firing cut outs.[5]

Due to issues with the vertically launched ASROC, ships with VLS had to wait until 1993[6] to have the capability to fire RUM-139 VL-ASROC. The Mk 26 provided ASROC capability in the late 1970s. The Mk 26 system was capable of launching nuclear ASROC and included appropriate safety measures. It used a system nuclear lock and a hanger rail nuclear lock. Loading of a nuclear weapon was permitted if either the system lock or the rail lock are unlocked. Both must be locked to prevent accidental or unauthorized loading of nuclear weapons onto the launch rails. These locks required crew intervention to unlock and the system key was different from the rail lock key.[2]

On 11 September 1976, USS Virginia (CGN-38) was commissioned, the first US Navy combat ship with the Mk 26 GMLS. Non-combatant USS Norton Sound (AVM-1) also had the Mk 26 in the early 1970s for Aegis testing. USS Thomas S. Gates (CG-51) was the last US Navy ship using the Mk 26 GMLS and was decommissioned in December 2005. As of 2014, the Mk 26 is apparently still in use by the Republic of China Navy on the former Kidd class destroyers.

A guided missile training round being loaded into a Mk 26 launcher, USS Arkansas (CGN-41) 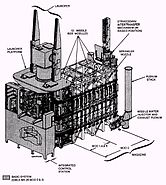