Mistral is an infrared homing surface-to-air missile manufactured by the European multinational company MBDA missile systems (formerly by Matra BAe Dynamics). Based on the French SATCP (Sol-Air À Très Courte Portée), the portable missile later to become the Mistral began development in 1974. It was initially deployed in 1988 for the first version (S1) and 1997 for the second version (M2).

The basic Mistral missile is used with a man-portable launch unit. There are also launch units that allow the missile to be fired from armoured vehicles, ships or helicopters (such as the Aérospatiale Gazelle, Denel Rooivalk, or Eurocopter Tiger). To reject the flares ejected from the rear of the targeted aircraft, proportional navigation using a gyro as a reference is adopted for Mistral, instead of the pursuit method in earlier IR-guided MANPADs. To further enhance the ECCM capability, the seeker of Mistral has a very narrow field of view to reject decoys and interference, but the seeker can title in the range of +/- 38 degrees. On the launcher, the missile runs up the gyro in 2 seconds, and total reaction time is 5 seconds. The all-aspect two-color (2-4 and 3-5 µm) cooled IR-seeker of Mistral is developed by SAT, and the missile adopts both laser proximity and impact fuzes.

A close-in weapon system based on Mistral is a six-missile version called Sadral, with a stabilized rapid-reload launcher that is fully automated. A CSEE developed fire control director is integrated to the launcher, consisted of TV camera and FLIR. Image produced by both directors appear on the screen in the operator console below deck, and the missiles are locked onto the target before being launched. A fully loaded Sadral launcher weighs 1080 kg, and the operator console weighs 280 kg. A two-missile unit installed on ships is called Simbad, and a newly launched four-missile version is called Tetral. An evolution of the Simbad is now proposed: Simbad RC. Both Tetral and Simbad RC are remote controlled from the ship's deck while the original Simbad is manually operated with a simple optical sight.

Mounted system on an ACMAT truck of the 54th Artillery regiment 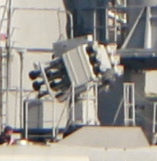 The Mistral's operational use encompasses the firing of more than 2,000 missiles, with a success rate of 95% during training [1]

Mistral missiles used by the Rwandan forces in the Second Congo War shot down a Zimbabwean Air Force BA Hawk fighter on March 23, 1999.[2]

On 26 September 2012 DCNS at the company's Le Mourillon plant announced plans to design and build a submarine canister-based air defence weapon based on the Mistral. The concept is based on the British Submarine Launched Airflight Missile developed by Vickers in the 1970s and tested on HMS Aeneas.[3]