A military volunteer is a person who enlists in military service by free will, and is not a mercenary or a foreign legionnaire. Volunteers often enlist to fight in the armed forces of a foreign country. Military volunteers are essential for the operation of volunteer militaries.

Many armies, including the U.S. Army, formerly distinguished between "United States Volunteers" enlisted during a war, and "regulars" who served on long-term basis. Troops raised as state militia were always "volunteers" (even when recruited by conscription), while "U.S." troops could be volunteers or regulars. The rank of an officer in a volunteer unit was separate from his rank (if any) as a regular, and usually higher. When the volunteer forces were disbanded at the end of the war, officers with both kinds of commission reverted to their "regular" rank. For instance, George Armstrong Custer became a Brigadier General of volunteers during the American Civil War, but when the war ended, he reverted to Captain. (He was later promoted to Lieutenant Colonel.) Volunteer rank should not be confused with brevet rank.

The move to a volunteer over conscription force for a national military appears to improve, at least for the United States, the professionalism of its standing armed forces. One result, however, is that a nation may be more quick to go to war because it does not have to answer to the public as it would if it needed to increase conscription to support the involvement in the armed conflict.[1] 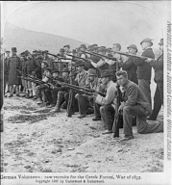 German volunteers for the Greek forces, war of 1897 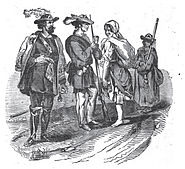