A military funeral is a memorial or burial rite given by a country's military for a soldier, sailor, marine or airman who died in battle, a veteran, or other prominent military figures or heads of state. A military funeral may feature guards of honor, the firing of volley shots as a salute, drumming and other military elements, with a flag draping over the coffin.

Canadian military funerals involve many rituals seen in other parts of the world. The Royal Canadian Horse Artillery use a 25-pounder gun and limber as the funeral vehicle. Muffled drums accompany the graveside processional. The deceased's headdress, insignia and medals are borne on a velvet cushion into the funeral service. Volleys are fired over the grave when the body is interred. Countries in the Commonwealth duplicate the British military drill and ceremony. The Canadian funeral described above typifies the funerary service. The bugle tune Last Post is played as the body is interred.

In Chilean military funerals, due to its Prussian military tradition, the German song "Ich hatt' einen Kameraden" is sung.

In Indonesia, military funerals are generally given only military members or former guerrillas, Konfrontasi and Trikora Operation Soldiers, especially those holding the Bintang Gerilya (Star of the Guerrilla). Exceptional politicians and Ministers have the option for such a funeral, but most opt for a more intimate religious one. Music is not performed as it is not part of Indonesian military tradition. A 21-gun volley salute is the norm by seven soldiers- occasionally a mixture of armed forces dependent on their career,[1] Honour drill team is platoon-size formation and larger the more illustrious the departed. A good example of an Indonesian military burial is that of the late president Suharto- (although obvious major differences exist)

In Poland, the last fragment of Władysław Tarnowski's song Śpij, kolego ("Sleep, friend"),[3][4][5] a portion of the larger composition Jak to na wojence ładnie (the title has no precise English translation, but it is roughly "how nice it is in war", with a diminutive form conveying a sense of ironic solidarity)[6] is an integral part of a military funeral.

In Spain, the formed troops sing "La muerte no es el final": Death is not the End.

As of January 1, 2000, Section 578 of Public Law 106-65 of the National Defense Authorization Act mandates that the United States Armed Forces shall provide the rendering of honors in a military funeral for any eligible veteran if requested by his or her family. As mandated by federal law, an honor guard detail for the burial of an eligible veteran shall consist of no fewer than two members of the Armed Forces. One member of the detail shall be a representative of the parent armed service of the deceased veteran. The honor guard detail will, at a minimum, perform a ceremony that includes the folding and presenting of the flag of the United States to the next of kin and the playing of Taps which will be played by a lone bugler, if available, or by audio recording. Today, there are so few buglers available that the United States Armed Forces often cannot provide one.[7] However, federal law allows Reserve and National Guard units to assist with funeral honors duty when necessary.

The coffin of Lieutenant Reginald Warneford being carried to his burial plot in Brompton Cemetery by members of the Royal Naval Division on June 21, 1915. 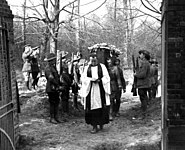 The military funeral of Manfred von Richthofen is presided by officers of the No. 3 Squadron RAAF who carry his coffin in Bertangles Cemetery, France on April 22, 1918.

Luftwaffe Commander-in-Chief Hermann Göring giving a speech at the military funeral of Night fighter ace Lieutenant Colonel Helmut Lent, winner of the Oak Leaves with Swords and Diamonds to the Knight's Cross of the Iron Cross, October 1944.

The casket of Caspar Weinberger, 15th United States Secretary of Defense, in a ceremonial funeral procession en route to its final resting place in Arlington National Cemetery on April 4, 2006.

A casket team from the 3rd United States Infantry Regiment "The Old Guard" transports the remains of Retired Chief Warrant Officer Michael J. Novosel during a ceremonial funeral procession at Arlington National Cemetery where he was laid to rest on April 13, 2006.

Escort platoons march in the United States Naval Academy Cemetery as part of the ceremonial funeral procession for former Chairman of the Joint Chiefs of Staff, Admiral William J. Crowe in 2007.

A Canadian honor guard carries the remains of Pte. Sebastien Courcy during a sundown ramp ceremony at Kandahar Air Field, Afghanistan on July 17, 2009.
Funeral140675.jpg
Former President Lula during the funeral of MINUSTAH`s Commander.