) was a borderland of Habsburg Austria and later the Austro-Hungarian Monarchy, which acted as the cordon sanitaire against incursions from the Ottoman Empire. When created in the 16th century by Ferdinand I, it was divided into two districts each under its own special military administration: the Croatian Military Frontier and the Slavonian Military Frontier. Both of these, along with all later military districts, were placed under the unified control of the Croatian General Command in 1783.[1] The Military Frontier was a separate Habsburg administrative unit, directly subordinated to Vienna. Its territory stretched from central Croatia in the west to eastern Transylvania in the east and included parts of present-day Croatia, Serbia, Romania and Hungary.

The Ottoman wars in Europe caused the border of the Kingdom of Hungary and subsequently the Habsburg Monarchy to shift towards northwest. Much of the old Croatian territory was either captured by the Ottomans or bordered the new Ottoman domain.

In 1435, in an attempt to strengthen the defences towards the Ottomans and Venice, the king Sigismund founded the so-called tabor, a military encampment, each in Croatia, Slavonia and Usora. In 1463, the king Matthias Corvinus founded the banovina of Jajce and Srebrenik, and in 1469 the military captaincy of Senj, modeled after the Ottoman captaincies in the Province of Bosnia. All these actions were intended to provide for better defences, but were ultimately unsuccessful. It did bring forth the Croatian Pandur infantry and the Serbian Hussar cavalry though.

After 1526, the Austrian Habsburgs were selected by the Croatian Parliament as kings of Croatia, and Emperor Ferdinand promised the Croatian Parliament that he would give them 200 cavalrymen and 200 infantrymen, and that he would pay for another 800 cavalrymen who would be commanded by the Croatians. Soon the Habsburg Empire founded another captaincy in Bihać. In the short term, all this was also ineffective, as in 1529 the Ottomans swept through the area, captured Buda and besieged Vienna, wreaking havoc throughout the Croatian border areas.

In 1553, the borderland was reformed for the first time, under the commander Ivan Lenković. The frontier was split into the Croatian Krajina (Krabatische Gränitz) and the Upper Slavonian Krajina (Windische, Oberslawonische Gränitz). The border with the Ottoman Empire on the line Senj-Otočac-Slunj-Glina-Hrastovica-Sisak-Ivanić-Križevci-Đurđevac was fortified with several smaller and larger forts. New captaincies were formed in the larger forts: Ogulin, Hrastovica, Žumberak, Koprivnica, Križevci and Ivanić. Smaller forts were manned by German infantry and Croatian light infantry. The larger forts were manned by German heavy cavalry and Croatian light cavalry.

The new military expenditures became a considerable concern, and the Congress of Inner Austrian lands in Bruck an der Mur in 1578 defined the obligations of each land in covering the military expenses and defined the priorities in improving the defensive strategy. The nobility of Styria financed the Upper Slavonian Frontier while the others (Lower Austria, Upper Austria, Carniola, Carinthia and Salzburg) financed the Croatian Frontier.

By the end of the 16th century, the Croatian Krajina became known as the Karlovac generalat, and since the 1630s the Upper Slavonian Krajina was known as the Varaždin generalat. During the 16th and 17th centuries, the military administration of the Frontier was moved away from the Croatian ban and the Sabor (Parliament) and instead instated in the high command of Archduke Charles and the War Council in Graz.

Despite the financial support of the Inner Austrian nobility, the financing of the Military Frontier was not efficient enough. The military leadership in Graz decided to try solutions other than mercenary units. In the 1630s, the Imperial Court decided to give land and certain privileges to immigrants into the Frontier (the uskok guerrillas as well as refugees from Ottoman-controlled lands) at the area of Žumberak, and in return they would serve in the Imperial army. The remaining local population was also encouraged to remain by receiving the status of free peasants (rather than serfs) and other privileges. These new units were organized into ten or more voivodeships per each captaincy.

In November 1630, the Emperor proclaimed the so-called Statuta Wallachorum or Vlach Statute [1], which regulated the status of so-called Vlach settlers (which included Croats, Serbs and Vlachs) from the Ottoman Empire with regard to military command, their obligations and rights to internal self-administration. Over time, the population of the Frontier (as it was then) became mixed between the autochthonous Croats and Croatian serfs who had fled the Ottoman territories, and the numerous minority of Serb and Vlach (who were later assimilated into Croats and Serbs) refugees who strove to expand their rights as a major contributor in the defense of the land. By creating the new military class in the Frontier, the territory of the Frontier eventually became fully detached from the Croatian Parliament and the ban. The Territory of the Frontier had a large Serb population, who fled from their south-eastern lands, and tried to fight the Ottoman forces, making a refuge in Habsburg Croatia. As freedom of faith was granted to them, the Orthodox faith was preserved in spite of their living in a Catholic country. Eventually, the whole population of the Military Frontier became professional soldiers that served an Empire on several fronts and through many European wars, even after the disappearance of Ottoman threat.

In 1673, the first detailed map of the Military Frontier was released, where the funfair and the public bath for border guard officers and other gentlemen from the neighborhood in Miholjanec was marked.[2] Their wives and children lived together in organized agricultural cooperatives.

After the Great Turkish War and Treaty of Karlowitz

The 17th century was a relatively peaceful period, during which only smaller raids were made from the Province of Bosnia. After the Ottoman army was repelled at the Battle of Vienna in 1683, the Great Turkish War ended with much of the former Croatian lands under Habsburg control. Despite this, the Frontier system was retained, and expanded onto former Ottoman territories in Lika, Kordun, Banija, lower Slavonia, Syrmia, Bačka, Banat, Pomorišje, and Transylvania. The Empire valued the ability to centrally control the area and draft cheap and numerous army units.

After the Treaty of Karlowitz of 1699, a unit called the Serežan troop was formed, and it had both military and police duties. The members were not paid, but were released of all taxes. As an irregular unit, they wore a folk uniform rather than an army one. Over the following century, each regiment had one section of the serežani, led by a oberbaša or harambaša (sergeant), several unterbaša (corporal) and vicebaša (lance corporal). They organized the border patrols towards Bosnia, particularly on difficult terrain, and stopped incursions of bandits. They had to have extensive knowledge of the territory, good marksmanship and to be constantly under arms. They also maintained public law and order in the area of their regiment. There were also cavalry serežan units that served as escort to the high officers of Frontier regiments, carried urgent orders and carried out special patrol duties.

In mid-18th century, the Frontier was once again reorganized and modelled after the Imperial army and its regular regiments. In 1737, the Vlach Statute was formally abolished. All previous captaincies and voivodships were discarded, and the area was instead subdivided into general-commands, regiments and companies:

After 1767, every twelfth inhabitant of the Military Frontier was a soldier, while in the rest of the Habsburg Monarchy only every 62nd inhabitant was one. The Frontier soldiers became professional military, ready to move to all European battlefields. Due to further immigration of refugees from the Ottoman domain, and the expansion of the territory to places previously controlled by the Ottomans, the population of the Frontier became even more mixed. There were still many autochthonous Serbs and Croats in Slavonia and parts of present-day Vojvodina (in Syrmia, Bačka and Banat). However, at this time they became outnumbered by the Serb, Croat and Vlach refugees/immigrants. Some Germans and Magyars also came to the Frontier, mostly as administrative personnel, and there was a number of other settlers and military persons from other parts of the Habsburg Empire such as the Czechs, Slovaks, Ukrainians, Rusyns and others.

In 1787, the civil administration was separated from the military, but this was reversed in 1800. By the Basic Law of the Frontier from 1850, the administration of Military Frontier was split and the land started to look like a state. The Main Command was headquartered in Zagreb, but still directly subordinate to the Ministry of War in Vienna.

Abolishment of the frontier

According to various church records, censuses which didn't include nobles and other records of that time, the estimated ethnical structure of the Military Frontier in 1790 was:[5]

An Austrian statistical yearbook for 1846. notes that 1,226,408 residents lived in the Military Frontier:[7]

According to the official Austrian census from 1850-1851, the population of the Military Frontier numbered 958,877 inhabitants.

In the 18th and 19th centuries, the frontier was divided into several districts:

This section of the Military Frontier existed in the first half of the 18th century and comprised parts of southern Bačka (including Palanka, Petrovac, Petrovaradinski Šanac, Titel, etc.) and northern Syrmia (including Petrovaradin, Šid, etc.). After the abolishment of this section of the Frontier, one part of its territory was placed under civil administration and another part was joined to other sections of the Frontier.

This section of the Military Frontier existed between 1702 and 1751 and comprised parts of north-eastern Bačka (including Sombor, Subotica, Kanjiža, Senta, Bečej, etc.). After the abolishment of this section of the Frontier, most of its territory was placed under civil administration, while one small area in the south remained under military administration as part of the Šajkaš Battalion.

This section of the Military Frontier existed between 1702 and 1751 and comprised the region of Pomorišje (area on the northern bank of the river Mureș). After the abolishment of this section of the Frontier, its entire territory was placed under civil administration.

It existed in the first half of the 18th century along the Sava river.

The Banat Krajina was located on the Serbian-Romanian border. It was divided into Serbian (Illyrian), German (Volksdeutscher) and Romanian (Vlach) sections.

The Slavonian Krajina was located along Posavina, from eastern Croatia, following the river Sava, along the border with Bosnia-Herzegovina and Serbia, and stretched into Syrmia, until inflow into Danube near Zemun (today part of Belgrade). Its north-eastern border followed the Danube up until the Petrovaradin.

The Croatian Military Frontier or "Banska krajina" was located on the border of Croatia and Bosnia.

This part of the Military Frontier included the geographic regions of Lika, Kordun, Banovina (named after "Banska krajina"), and bordered the Adriatic Sea to the west, Venetian Republic to the south, Habsburg Croatia to the west, and the Ottoman Empire to the east.

It extended onto the Slavonian Krajina near the confluence of the rivers Una and Sava.

The Šajkaš Battalion was a small part of the Frontier that was formed in 1763 from parts of the previously abolished Danube and Tisa sections of the frontier. In 1852, Šajkaš battalion was transformed into Titel infantry battalion. It was abolished in 1873, and its territory was incorporated into Bačka-Bodrog County.

Transylvanian Military Frontier existed from 1762 to 1851, mostly in eastern and southern parts of Transylvania. It was composed of two Székely and two Romanian regiments. The establishment of the frontier was followed by the Mádéfalva Massacre or Siculicidium. 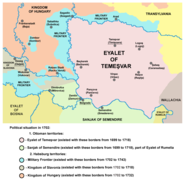 Map of Military Frontier sections in Syrmia, Bačka, and Pomorišje in 1699-1718 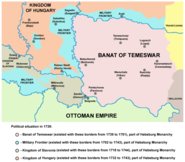 Map of Military Frontier sections in Syrmia, Bačka, and Pomorišje in 1718-1744

Map of Military Frontier sections in Syrmia, Bačka, and Pomorišje in 1744-1750 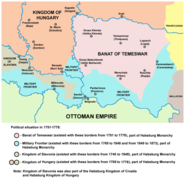 Map of Military Frontier sections in Syrmia, Bačka, and Banat in 1751-1873 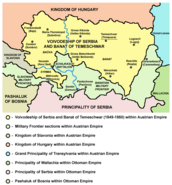 Map of Military Frontier sections in Banat, Syrmia and Bačka in 1849 - Banatian and Slavonian military frontier (Banat and Slavonian Krajina) and Schajkasch Battalion 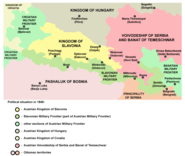 Map of Slavonian Krajina in 1849

Map of Croatian Krajina in 1868