The Michael the Brave 30th Guards Brigade is an honor guard unit of the Romanian Land Forces.

The unit was established on 1 July 1860 through a decree issued by Prince Alexandru Ioan Cuza as the 1st Honor Guard battalion of Romania.[1] It was abolished by the communist government in 1948.[2] The regiment has taken part in ceremonies in Romania, and has represented Romania in the 2007 Bastille Day military parade, and the 2016 Chișinău Independence Day Parade.[3] 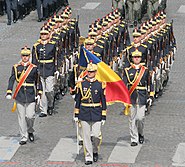 Soldiers during the 2007 Bastille Day Parade

Guards marching during a parade in Rome in 2006