The Messerschmitt Me 210 was a German heavy fighter and ground-attack aircraft of World War II. The Me 210 was designed to replace the Bf 110 in heavy fighter role; design started before the opening of World War II. The first examples of the Me 210 were ready in 1939, but they proved to have poor flight characteristics from serious, unanticipated design flaws. A large-scale operational testing program throughout 1941 and early 1942 did not cure the aircraft's problems. The design eventually entered limited service in 1943, but was almost immediately replaced by its successor, the Messerschmitt Me 410 Hornisse ("Hornet"). The Me 410 was a further development of the Me 210, renamed so as to avoid the 210's notoriety. The failure of the Me 210's development program meant that the Luftwaffe was forced to continue fielding the outdated Bf 110, to mounting losses.

Messerschmitt designers had started working on an upgrade of the Bf 110 in 1937, before the production version of the Bf 110 had even flown. In late 1938, the Bf 110 was just entering service, and the RLM started looking ahead for its eventual replacement. Messerschmitt sent in their modified Bf 110 design as the Me 210, and Arado responded with their all-new Ar 240.

The Me 210 was a straightforward cleanup of the 110, and used many of the same parts. The main differences were a modified nose area that was much shorter and located over the center of gravity, and an all-new wing designed for higher cruise speeds. On paper, the Me 210's performance was impressive. It could reach 620 km/h (390 mph) on two 1,350 PS (1,330 hp, 990 kW) Daimler-Benz DB 601F engines, making it about 80 km/h (50 mph) faster than the Bf 110, and nearly as fast as single-engine fighters of the era.

The Me 210's main landing gear followed some of the design philosophies that had resulted from the main change in the earlier Ju 88's main landing gear design, where each main gear had a single gear strut that twisted through 90° during retraction, to bring the main gear wheel resting atop the lower end of the main strut when retracted rearwards into the wing. Unlike the Ju 88, however, the Me 210's main gear wheels were inboard of the main gear struts when fully extended, while the Ju 88's were outboard of the struts.

The Bf 110 carried its ordnance externally, on the wings and fuselage, but this created drag; the Me 210 avoided this problem by housing the bombs in an enclosed bomb bay, in the nose of the aircraft. The Me 210 could carry up to two 500 kg (1,100 lb) bombs. The Me 210 had dive brakes fitted on the tops of the wings, and a Stuvi 5B bombsight ("Stuvi"-Sturzkampfvisier, dive-boming bombsight) in the nose, for shallow-angle dive bombing. In the fighter role, the bomb bay was fitted with four 20 mm cannons.[citation needed]

For defense, the Me 210's rear gunner was armed with two 13 mm (.51 in) MG 131 machine guns. Each of these were fitted into half-teardrop-shaped Ferngerichtete Drehringseitenlafette FDSL 131/1B turrets mounted on each side of the aircraft, and were remote-controlled from the gunner's position in the rear of the glazed cockpit area with a unique gun-aiming setup. This unit had a rotating transverse crossbar with a sideways-pivoting handgun-style grip and trigger at its center, "forked" at its forward pivoting end to fit around the crossbar, with the upper fork extended beyond the rotating crossbar to mount the gunsight. This unique aiming and control scheme rotated the crossbar axially, when the handgrip was elevated or depressed, to aim the guns vertically by rotating both turrets together, and a sideways movement of the handgrip would pivot either one of the guns outward from the fuselage-mounted turrets for diagonal firing.[1] The rear of the cockpit canopy's lower side glazing panels were bulged out to allow the gunner to see in almost any rearward-facing direction. The guns were electrically fired, and an electrical contact breaker acted as a form of "interrupter" as used on many forms of multi-engined, turret-armed WW II aircraft, preventing the gunner from shooting off the Me 210's tailplane.

An order for 1,000 Me 210s was placed before the prototype had flown. In time, this would prove to be a mistake. The first prototype flew with DB 601B engines in September 1939, and was considered unsafe by test pilots. Stability was bad in turns, and it tended to "snake" even while flying level. At first, the designers concentrated on the twin-rudder arrangement that had been taken from the 110, and replaced it with a new and much larger single vertical stabilizer. This had almost no effect, and the plane continued to oscillate. The Me 210 also suffered from terrible stalls. With the nose up or in a turn, the stalls whipped into spins when the automatic leading-edge slats opened. The second prototype, Me 210 V2, was lost this way in September 1940, when the pilot could not get out of the resulting spin and had to abandon the aircraft. The chief test pilot commented that the Me 210 had "all the least desirable attributes an aeroplane could possess." It took 16 prototypes and 94 pre-production examples to try to resolve the many problems. Nevertheless, the RLM was desperate to replace the Bf 110s currently in service, and ordered full production in early 1941. The type exhibited grossly inadequate handling characteristics, and a result, several elements of airframe were redesigned, including lengthening the rear section of the fuselage by 92 cm (36-1/4 inches), designated as lang ("long"). The Me 210C was built with DB 605 engines, as well as incorporating the changes to the airframe. The Hungarian authorities were satisfied with the Me 210C in its current state, and purchased a production license for the type, designated Me 210Ca (a = ausländisch) as well as for its DB 605 engines. Several airframes were also purchased, to be completed in Hungarian factories for practice while the assembly lines were set up. Production started in the Dunai Repülőgépgyár Rt. (Danubian Aircraft Plant) as the Me 210Ca with the DB 605B engine, under an agreement where the Luftwaffe got two of every three produced.

The Me 210 was eventually developed into the Messerschmitt Me 410, with DB 603 engines.

Deliveries to front-line units started in April 1942, and the plane proved to be even less popular with pilots. Production was stopped at the end of the month, by which time only 90 had been delivered. Another 320 partially completed models were placed in storage. In its place, the Bf 110 was put back into production. Although the Bf 110 was now equipped with the newer DB 605B engines and greater firepower, it was still an outdated design.

The Luftwaffe started receiving their Hungarian-built planes in April 1943, and the Hungarians in 1944; when they entered service they were more than happy with them. Production ended in March 1944, when the factory switched over to produce the Bf 109G. By that time, a total of 267 Me 210C had been built, 108 of which had been given to the Luftwaffe. They operated mostly in Tunisia and Sardinia, and were quickly replaced by the Me 410.

From Wagner, Ray and Nowarra, Heinz. German Combat Planes: A Comprehensive Survey and History of the Development of German Military Aircraft from 1914 to 1945. New York: Doubleday, 1971, page 258. 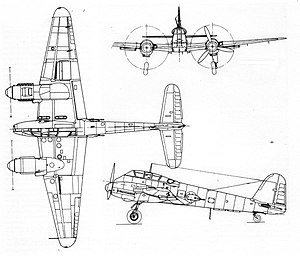