Matsumoto Castle (松本城, Matsumoto-jō?), also known as the "Crow Castle" (烏城, Karasu-jo?) because of its black exterior, is one of Japan's premier historic castles.[1] It is located in the city of Matsumoto, in Nagano Prefecture and is within easy reach of Tokyo by road or rail.

The keep (tenshukaku), which was completed in the late 16th century, maintains its original wooden interiors and external stonework. It is listed as a National Treasure of Japan.[1]

Matsumoto Castle is a flatland castle (hirajiro) because it is not built on a hilltop or amid rivers, but on a plain.[1] Its complete defences would have included an extensive system of inter-connecting walls, moats and gatehouses.[1]

In 1872, following the Meiji Restoration, the site, like many former daimyos' castles, was sold at auction for redevelopment.[1] However, when news broke that the keep was going to be demolished, an influential figure from Matsumoto, Ichikawa Ryōzō, along with residents from Matsumoto started a campaign to save the building. Their efforts were rewarded when the tower was acquired by the city government.[2] In the late Meiji period the keep started to lean to one side. An old picture (shown below) clearly shows how the keep looked like then. It was because of neglect coupled with a structural defect, but a lot of people believed the story of Tada Kasuke's curse.[3] A local high school principal, Kobayashi Unari, decided to renovate the castle and appealed for funds. The castle underwent "the great Meiji renovation" between 1903-1913. It underwent another renovation "the great Shōwa renovation" in the period 1950-1955. In 1990, the Kuromon-Ninomon (second gate of the Black Gate) and sodebei (side wall) were reconstructed. The square drum gate was reconstructed in 1999. Matsumoto Castle was damaged in a 5.4 magnitude earthquake on June 30, 2011. The quake caused around 10 cracks in the inner wall of the main tower.[4]

There is a plan for restoring the soto-bori(outer moat) which was reclaimed for a residential zone.[5]

The castle's origins go back to the Sengoku period. At that time Shimadachi Sadanaga of the Ogasawara clan built a fort on this site in 1504 which was originally called Fukashi Castle. In 1550 it came under the rule of the Takeda clan and then Tokugawa Ieyasu.

When Toyotomi Hideyoshi transferred Ieyasu to the Kantō region, he placed Ishikawa Norimasa in charge of Matsumoto. Norimasa and his son Yasunaga built the tower and other parts of the castle, including the three towers: the keep and the small tower in the northwest, both begun in 1590, and the Watari Tower; the residence; the drum gate; the black gate, the Tsukimi Yagura, the moat, the innermost bailey, the second bailey, the third bailey, and the sub-floors in the castle, much as they are today. They were also instrumental in laying out the castle town and its infrastructure. It is believed much of the castle was completed by 1593–94.

During the Edo period, the Tokugawa shogunate established the Matsumoto Domain, of which the Matsudaira, Mizuno and others were the daimyo.

For the next 280 years until the abolition of the feudal system in the Meiji Restoration, the castle was ruled by the 23 lords of Matsumoto representing six different daimyo families. In this period the stronghold was also known as Crow Castle (烏城, Karasu-jo?) because its black walls and roofs looked like spreading wings.

The second floor of the main keep features a gun museum, Teppo Gura, with a collection of guns, armor and other weapons.[6] 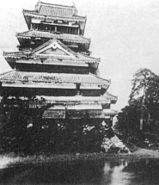 The keep, leaning, prior to 1904.
Archive of the Matsumoto Castle management bureau.