The Infantry Tank Mark II known as the Matilda II (sometimes referred to as Matilda senior or simply an 'I' tank) was a British Infantry tank of the Second World War. It was also identified from its General Staff Specification A12.

It served from the start of the war to its end and became particularly associated with the North Africa Campaign. It was replaced in service by the Infantry Tank Mk III Valentine.

The Infantry Tank Mk II was designed at the Royal Arsenal, Woolwich[7] to General Staff specification A.12[1] and built by the Vulcan Foundry. The design was based on the A7[8] (which had started development in 1929) [9] rather than on the Infantry Tank Mk I, which was a two man tank with a single machine gun for armament.

The Matilda Senior[10] weighed around 27 tonnes (27 long tons; 30 short tons),[11] more than twice as much as its predecessor, and was armed with a 2 pounder (40 mm) tank gun in a three-man turret. The turret traversed by hydraulic motor or by hand through 360 degrees; the gun itself could be elevated through an arc from -15[nb 2] to +20 degrees.[5]

Like other infantry tanks it was heavily armoured; from 20 mm at the thinnest it was 78 mm (3.1 inch) at the front, much more than most contemporaries. The turret armour was 75 millimetres (3.0 in) all round,[5] the hull side armour was 65 to 70 millimetres (2.6 to 2.8 in),[nb 3] and the rear armour, covering[Clarification needed] the engine, was 55 millimetres (2.2 in).[5] The frontal armour was 75 millimetres (3.0 in), although the nose plates top and bottom were thinner but angled. The turret roof was the same thickness as the hull roof and engine deck: 20 millimetres (0.79 in).[12] The German Panzer III and Panzer IV tanks, of the same period, had 30 to 50 millimetres (1.2 to 2.0 in) thick hull armour. The shape of the nose armour was based on the US Christie design,[13] and came to a narrow point with lockers added on either side. The heavy armour of the Matilda's cast turret became legendary; for a time in 1940–41 the Matilda earned the nickname "Queen of the Desert" although its weaknesses made this nickname difficult to justify.[14] At the time it was designed, this armour protection could not be penetrated by any antitank gun in the world,[13] although early models of German 88mm anti-aircraft artillery was able to defeat the Matilda's armour at short range.

The weight of the armour, together with the relatively weak twin-engine power unit (the engine adapted from that of a bus) and complex, troublesome suspension severely limited the speed of the vehicle. For example, in the desert terrain of North Africa the Matilda could average only about 6 miles per hour (9.7 km/h). This was not thought to be a problem because the Matilda was specifically designed in accordance with the British doctrine of infantry tanks, that is, heavily-armoured but slow-moving vehicles designed to provide support to infantry. Under this thinking, a speed equal to the walking speed of a man was considered sufficient.

Each engine had its own separate coolant and lubrication system. The radiators were to the rear of the engine compartment over the transmission. The twin engine design doubled the maintenance effort for crews and often resulting in uneven wear and tear of components. The twin engine design, however, gave some redundancy. If one engine broke down, the tank could "limp along" on the other.[15]

The tank was carried by 5 double wheel bogies on each side. Four of the bogies were paired on a common coil spring. The fifth, rearmost, bogie was sprung against a hull bracket. Between the first bogie and the idler wheel was a "jockey wheel". The first Matildas had return rollers, these were replaced in later models with track skids which were far easier to manufacture.

The first Matilda was produced in 1937 but only two were in service when war broke out in September 1939. Some 2,987 tanks were produced by the Vulcan Foundry, John Fowler & Co., Ruston & Hornsby, and later by the London, Midland and Scottish Railway at Horwich Works; Harland and Wolff, and the North British Locomotive Company. Production was stopped in August 1943. Peak production was 1,330 in 1942, the most common model being the Mark IV.[17]

The Matilda was difficult to manufacture. For example, the pointed nose was a single casting that, upon initial release from the mold, was thicker than required in some areas. To avoid a needless addition to the tank's weight, the thick areas were ground away. This process required highly skilled workers and additional time. The complex suspension and multi-piece hull side coverings also added time to manufacturing.[13]

The Matilda was first used in combat by the 7th Royal Tank Regiment in France in 1940. Only 23 of the unit's tanks were Matilda IIs; the rest of the British Infantry Tanks in France were A11 Matildas.[18] Its 2-pounder gun was comparable to other tank guns in the 37 to 45 mm range. Due to the thickness of its armour, it was largely immune to the guns of the German tanks and anti-tank guns in France.[19] The famous 88 mm anti-aircraft guns were pressed into the anti-tank role as the only effective counter. In the counterattack at Arras, although British Matilda IIs (and Matilda Is) were able briefly to disrupt German progress, being unsupported their losses were high. All vehicles surviving the battles around Dunkirk were abandoned when the BEF evacuated.

Up to early 1942, in the war in North Africa, the Matilda again proved highly effective against Italian and German tanks, although vulnerable again to the larger calibre and medium calibre anti-tank guns.

In late 1940, during Operation Compass, Matildas of the British 7th Armoured Division wreaked havoc among the Italian forces in Egypt. The Italians were equipped with L3 tankettes and M11/39 medium tanks, neither of which had any chance against the Matildas. In addition, Italian gunners were to discover that the Matildas were impervious to a wide assortment of artillery. Matildas continued to confound the Italians as the British pushed them out of Egypt and entered Libya to take Bardia and Tobruk. Even as late as November 1941, German infantry combat reports show the impotence of ill-equipped infantry against the Matilda.[20]

Ultimately, in the rapid manoeuvre warfare often practiced in the open desert of North Africa, the Matilda's low speed and unreliable steering mechanism became major problems. Another problem was the lack of a high-explosive capability (the appropriate shell existed but was not issued). When the German Afrika Korps arrived in North Africa, the 88 mm anti-aircraft gun was again pressed into the anti-tank role against the Matilda, causing heavy losses during Operation Battleaxe, when sixty-four Matildas were lost. The arrival of the more powerful 50mm Pak 38 anti-tank gun also provided a means to the German infantry to engage Matilda tanks at combat ranges. Nevertheless, during Operation Crusader Matilda tanks of 1st and 32nd Army Tank Brigades were instrumental in the successful breakout from Tobruk and the capture of the Axis fortress of Bardia.[21] The operation was decided by the infantry tanks after the failure of the cruiser tank equipped 7th Armoured Division to overcome the Axis tank forces in the open desert.[22]

As the German army received new tanks with more powerful guns, as well as more powerful anti-tank guns and ammunition, the Matilda proved less and less effective. Firing tests conducted by the Afrikakorps showed that the Matilda had become vulnerable to a number of German weapons at ordinary combat ranges.[23] Due to the "painfully small"[24] size of its turret ring - 54 inches (1.37 m) - the tank could also not be up-gunned sufficiently to continue to be effective against more heavily armoured enemy tanks. It was also somewhat expensive to produce. Vickers proposed an alternative, the Valentine tank, which had the same gun, a similar level of armour protection, but on a faster and cheaper chassis derived from that of their "heavy cruiser" tank. With the arrival of the Valentine in autumn 1941, the Matilda was phased out by the British Army through attrition, with lost vehicles no longer replaced. By the time of the battle of El Alamein (October 1942), few Matildas were still in service, with many having been lost during Operation Crusader and then the Gazala battles in early summer of 1942. Around twenty five took part in the battle as mine-clearing, Matilda Scorpion mine flail tanks.

A few Matildas of the 7th RTR were present on Crete during the German invasion, and all of them were lost.[25]

In the Pacific, however, Japanese forces were lacking in heavy anti-tank guns and the Matilda remained in service with several Australian regiments in the Australian 4th Armoured Brigade, in the South West Pacific Area. They first saw active service in the Huon Peninsula campaign in October 1943. Matilda II tanks remained in action until the last day of the war in the Wewak, Bougainville and Borneo campaigns, which made the Matilda the only British tank to remain in service throughout the entire war.[3]

The Red Army received 1,084 Matildas.[3] The Soviet Matildas saw action as early as the Battle of Moscow and became fairly common during 1942. Unsurprisingly, the tank was found to be too slow and unreliable. Crews often complained that snow and dirt were accumulating behind the "skirt" panels, clogging the suspension. The slow speed and heavy armour made them comparable to the Red Army's KV-1 heavy tanks, but the Matilda had nowhere near the firepower of the KV. Most Soviet Matildas were expended during 1942 but a few served on as late as 1944. The Soviets modified the tanks with the addition of sections of steel welded to the tracks to give better grip.[3]

Use of captured Matildas

Following Operation Battleaxe a dozen Matildas left behind the Axis lines were repaired and put into service by the Germans.[26] The Matildas were well regarded by their German users [27] although their use in battle caused confusion to both sides, despite extra-prominent German markings.[26]

With improved engines. rigid mounting and no turret lamp[29]

Matilda chassis with a mine flail. Used in North Africa, during and after the battle of El Alamain.

The normal turret was replaced by a cylindrical one containing a searchlight (projected through a vertical slit) and a BESA machine gun.

Officially known as the Matilda Projector, Hedgehog, No. 1 Mark I,[32] this fitted a Hedgehog 7-chambered spigot mortar in an armoured box on the rear hull of several Australian Matilda tanks. The projector was elevated by hydraulics adapted from the Logan traversing mechanism used in M3 Medium tank turrets.[32] and electrically fired either individually or in a salvo of six, from the 12 o'clock position;[33] the fifth tube could not be fired until the turret was traversed to 1 o'clock,[33] to move the radio antenna out of the bomb's flightpath. Each bomb weighed 65 lb (29 kg) and contained 30 to 35 lb (14 to 16 kg) of high explosive. The range was up to 400 m (440 yd). Aiming was accomplished by pointing the entire tank; the mounting had no independent traverse,[34] so accuracy was not spectacular, but adequate for the task.[33] Trials at Southport, Queensland, in May 1945 were pronounced complete success, and the Projector would have been impressive against enemy bunkers, but the war ended before it was used operationally.[33] 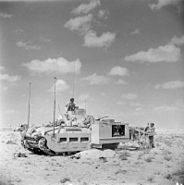 A Matilda Hedgehog, with the mortar elevated.

Around 45 Matilda II's survive in various degrees of preservation. The majority (around 30) are in Australia, either in museums or in private ownership. A notable collection is that of the Royal Australian Armoured Corps Memorial and Tank Museum, at Puckapunyal, Australia, which has five Matilda II's on display. In Britain, the Imperial War Museum in London, and the Royal Armoured Corps Tank Museum in Bovington, Dorset, hold examples of the Matilda II. The Matilda II at Bovington is in running condition.[35]

Bovington Tank Museum, Britain. In working order, painted to represent the tank in which H.R.B. Foote won the Victoria Cross.