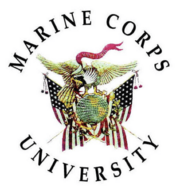 The Marine Corps University is a group of accredited higher-education schools at Marine Corps Base Quantico, Virginia. It reports to the United States Marine Corps Training And Education Command. It was established on August 1, 1989 by General Alfred M. Gray, Jr., then Commandant of the Marine Corps.

Marine Corps University is accredited by the Commission on Colleges of the Southern Association of Colleges and Schools to award Master's Degrees.[1]

Expeditionary Warfare School (EWS)
formerly Amphibious Warfare School (AWS): The mission of EWS is to provide Marine Captains career-level professional military education and oversee their professional military training in command and control, MAGTF operations ashore, and naval expeditionary operations. This training and education will enable them to command or serve as primary staff officers in their MOS, integrate the capabilities resident within their element of the MAGTF, integrate their element within the MAGTF, and understand the functions of the other elements of the MAGTF.[5]