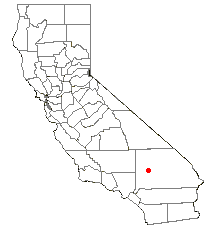 The base is located on Interstate 40, 3.5 miles (6 km) east of the city of Barstow. The base lies at the junction of three major highways systems of I-15, I-40, and SR 58. It's the hub of all west coast rail traffic for the Burlington Northern/Santa Fe and the Union Pacific railroads and in the immediate proximity to the Barstow-Daggett Airport. It is also approximately 98 miles from the Marine Corps Air Ground Combat Center Twentynine Palms. The base is within 150 miles (240 km) of the two major seaports of Los Angeles and San Diego.

The Marine Corps Logistics Base, presently the second largest employer in the Barstow area, was established as the Marine Corps Depot of Supplies at its present location on December 28, 1942, when the United States Navy turned it over to the Marine Corps as a storage site for supplies and equipment needed for Fleet Marine Forces in the Pacific theater during World War II. By the end of World War II, the base had outgrown its facilities and as a result, 2,000 acres (8 km²) of land, approximately seven miles east of the Nebo Main Base were annexed from the United States Army in October 1946. In 1954, the Commanding General, Marine Corps Depot of Supplies, moved his flag from San Francisco to Barstow and since then the base has grown in stature, strength and size.

The Yermo Annex encompasses 1,859 acres (8 km2) and is primarily a storage and industrial complex