Marie-Théodore Périgot (born in Strasbourg on 17 October 1807 and died in Nice on 9 May 1888) was a French officer who participated to the French conquest of Algeria.[1]

Anna-Pauline-Antoinette is a native of the town of La Croix in the department of Nièvre.[3]

Marie-Théodore was admitted to the École spéciale militaire de Saint-Cyr on 1825 when he was 18 years old.[4]

When he left this military school, he held the head of his promotion there, and he was assigned to the infantry corps.[5]

Main article: French conquest of Algeria
See also: Invasion of Algiers in 1830, Battle of Staouéli, and Second Assault of Dellys

On 14 June 1830, sub-lieutenant Périgot attended the landing of the French Navy for the invasion of Algiers, then took part in the combat of Sidi Fredj.[6]

He then took part on 18 June in the Battle of Staouéli before being a military actor on 5 July in the capture of the Casbah of Algiers.

Captain Périgot was appointed by Marshal Bugeaud as the superior commander of the town of Dellys in Kabylia when it suffered the second assault in May 1844.[7]

Périgot was promoted to the rank of colonel on 30 December 1852, and three years later in 1855, he received the stars of the rank of brigadier general.[9]

General Périgot was appointed in 1864 as governor of the province of Constantinois where he operated several expeditions with his military columns.[11]

He was still there in 1871 when the Mokrani Revolt broke out and spread to the Constantine region.[12]

Périgot was relieved of his functions as governor of Constantine at the beginning of November 1872 to be replaced by General Pouget.[13]

General Périgot had retired at the age of 71 since 10 October 1878 with the rank of divisional general.[14]

He was then in receipt of a military retirement pension obtained after his long years of service.[15]

Marie-Théodore Périgot was decorated with several medals during his military career, including:[16] 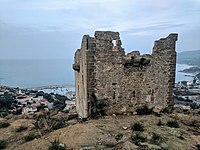