The MK 108 (German: Maschinenkanone—"machine cannon") was a 30 mm caliber autocannon manufactured in Germany during World War II by Rheinmetall-Borsig for use in aircraft.

The weapon was developed as a private venture by the company in 1940 and was submitted to the Reichsluftfahrtministerium (RLM—Reich Aviation Ministry) in response to a 1942 requirement for a heavy aircraft weapon for use against the Allied heavy bombers appearing over German-controlled regions by then. Testing verified that the autocannon was well-suited to this role, requiring on average just four hits with its RDX-loaded, and resulting strongly brisant high-explosive ammunition to bring down a heavy bomber such as a B-17 Flying Fortress or B-24 Liberator and a single "shattering" hit to down a fighter. In comparison, the otherwise excellent 20 mm MG 151/20 required an average of 25 hits to down a B-17.

The MK 108 was quickly ordered into production and was installed in a variety of Luftwaffe fighter aircraft. It saw first operational service in late autumn 1943 with the Bf 110G-2 bomber destroyers and in the Bf 109G-6/U4.

The cannon used specially-developed 30×90RB mm ammunition—30 mm calibre, 90 mm case length, rebated/reduced rim. Unlike most other weapon rounds, which used traditional brass for the case, the MK 108's ammunition used steel cases. Several types of ammunition were developed, including practice, armor-piercing, high-explosive and incendiary. In operation, however, two major ammunition types were used: Minengeschoß ("mine-shell") and high-explosive incendiary. The Minengeschoß was made by drawn steel (the same way brass cartridges are made) instead of being forged and machined as was the usual practice for cannon shells. This resulted in a shell with a thin but strong wall, which hence had a much larger cavity in which to pack a much larger explosive or incendiary charge than was otherwise possible.

The cannon proved to be very effective and reliable, yet comparatively light, compact and easy to manufacture. These characteristics stem from its simple construction—80% of the weapon was made from stamped parts, and the number of moving parts was kept to a bare minimum by using advanced primer ignition blowback (APIB) operation. However, this has some disadvantages, mostly the inability to combine a high ballistic performance with a high rate of fire. The MK 108 was optimized for a high rate of fire.

Otherwise, it was simple to manufacture and maintain, and its compact size and weight as well as its electrical priming made it ideal for aircraft installation. The cannon's distinctive heavy pounding sound and high rate of fire gave it the nickname "pneumatic hammer" amongst Allied aircrews, amongst whom the cannon gained a fearsome reputation due to its destructive power.

Normally, gas-operated or delayed-blowback mechanisms are used in automatic weapons of rifle-calibre and larger because the chamber pressure in such weapons would be very high. Therefore, if a simple blowback system (where there is no positive lock between the bolt and barrel) is used, the bolt may recoil and open the breech while the chamber pressure is still high, causing damage to the weapon and split cases (see blowback article for more information). To avoid this, simple blowback guns have to use low-powered cartridges or a very heavy bolt.

In an APIB gun such as the MK 108, this problem was mitigated by using a chamber longer than necessary to hold the cartridge case. When the trigger was released, the bolt was moved forward by a powerful spring. It not only chambered the cartridge but kept pushing it forward, following the case a small distance into the chamber. Cases with a rebated rim were used, so that the extractor claw could hook over the rim and still fit within the chamber. Primer ignition was timed so that the bolt was still moving forward when the propellant ignited. The expanding gases from the fired round then had to stop the bolt, reverse its motion, and expel the bolt again from the rear end of the chamber. Before this happened, most of the gases had escaped via the barrel, dropping the chamber pressure to a safe level. The heavy bolt then continued to move backwards into buffer springs, which pushed the bolt back into battery after a fresh round had been fed.

The APIB principle permits a higher rate of fire and lighter bolt than a simple blowback, but the length and speed of the travel of the bolt within the chamber are limited by the stresses the sliding motion, executed under high gas pressure, puts on the case. To keep these within limits, the bolt needs to be very heavy or the barrel short. The designers for the MK 108 opted for a short barrel, permitting a light bolt and a fairly high rate of fire. This principle also mandates a firing cycle starting with an open bolt, which prevents any such autocannon using the APIB principle from being fired safely through a spinning aircraft propeller's blade arc.

The resulting low muzzle velocity was the MK 108's main shortcoming, with the result that its projectile trajectory was seriously affected by bullet drop after a comparatively short range—41 m (135 ft) of drop in the first 1,000 m (3,300 ft) of range. The long time of flight and curved trajectory strongly reduced the usefulness of the MK 108 against maneuvering targets like fighters; it was designed for use against bombers. Even against these, attacks had to be pressed home to close range (often, at just 200–300 meters), which was particularly challenging for fast fighters like the Me 262, which risked colliding with the target if their approach speed was too high. 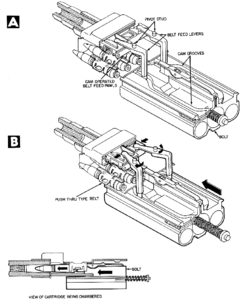 The MK 108 was also fitted to night fighters in an unusual installation, called "Schräge Musik" (German (Colloquialism): "Jazz",[1] literally "awkward music" or "slanted music"). In this configuration, the cannons were mounted in the fuselage, aiming upwards and slightly forwards at an oblique (18 to 30 degree) angle, depending on fitment and aircraft. This allowed the night fighter to attack bombers, almost always undetected, by approaching from underneath the enemy aircraft - many British heavy bombers had neither weapons on the ventral fuselage nor windows for vision. This installation was so effective that discovery and news of its adoption was much slower than usual in reaching British night-bombing forces, as there were rarely any survivors from the attacks to report the new threat. This system was fitted to some versions of the He 219 Uhu, late model Bf110 night fighters, Junkers 88/388 and the Dornier 217N model. It was also fitted more rarely to the (prototype) Focke Wulf Ta-154 & Fw-189 along with the Me 262B-2 model. In the latter case this produced a jet fighter with no less than 6 MK108 cannons - with the fitment of the projected mass-produced, mid-VHF band FuG 218 radar this would have made a very effective night interceptor — albeit with the draggy Hirschgeweih "stag's antlers" eight-dipole transcieving antenna array as actually fitted to some Me 262 B-1a/U1 night fighters.

The MK 108 mechanism was scaled up in the MK 112 cannon, using a 55×175RB cartridge. The MK 112 was intended to be fitted in pairs in the nose of Me 262 fighters, with 25 rounds per gun, and also in the nose of Arado 234. Underwing mounts for Dornier 335 were in development as well. The gun was not finished in time to see operations in WWII.[2] Only 15 prototypes were built; of these 10 were delivered for tests and 5 were kept at the factory for improvements based on expected feedback. Of the ten guns delivered for tests, seven were of an early model, weighting 660 lbs, and three were lighter at 605 lbs. The projectile was supposed to weight 3.3 lbs; of these 14.8 ounces were reserved for the explosive.[3] The US captured some of these prototypes and they were used for the experimental US 57 mm T78 autocannon, but this did not see production either.[2]