The Messerschmitt-Bölkow-Blohm Bo 105 is a light, twin-engine, multi-purpose helicopter developed by Bölkow of Stuttgart, Germany. It featured a revolutionary hingeless rotor system, at that time a pioneering innovation in helicopters when it was introduced into service in 1970. Production of the Bo 105 began at the then recently merged Messerschmitt-Bölkow-Blohm (MBB).

The main production facilities for producing the Bo 105 were located in Germany and Canada; due to the level of export sales encountered, additional manufacturing lines were set up in Spain, Indonesia, and the Philippines.[3] MBB became a part of Eurocopter in 1991, who continued production until 2001, when the Bo 105 was formally replaced in the product line by the Eurocopter EC 135.

The Bo 105A made its maiden flight on 16 February 1967 at Ottobrunn in Germany.[1] The German Civil Aviation Authority certified the helicopter on 13 October 1970 and production for German civil and law enforcement organizations began shortly afterwards. Further type certification by the Federal Aviation Administration (FAA) was granted in April 1972 with United States export orders following.

The Bo 105C was developed in 1972 and the German Ministry of Defence selected this model for its light observation helicopter program, purchasing 100 helicopters in 1977. A specialist anti-tank version armed with Euromissile HOT missiles and designated as the Bo 105PAH-1 was procured by the German Army around the same time, with a total of 212 eventually being delivered.

In 1976, the Bo 105CB was developed with more powerful Allison 250-C20B engines. This was further developed as the Bo 105CBS with the enlargement of the fuselage by 10 inches to meet American market demands for emergency medical service operations, with this version becoming known as the Bo 105 Twin Jet in the United States.

In 1984, the Bo 105LS was developed with the enlarged fuselage of the Bo 105CBS combined with more powerful Allison 250-C28C engines to increase the maximum take-off weight.

Being the first light twin-engined helicopter in commercial service, it gained widespread use over rural areas (police and EMS / medevac) as well as offshore.

The generally similar MBB Bö 106 featured a widened cabin seating three abreast in the front row and four abreast in the rear of the cabin. The prototype first flew on 25 September 1973,[5] but nothing further came of the project.[6]

The Bo 105 has a reputation for having high levels of maneuverability; certain variants have been designed for aerobatic maneuvers and used for promotional purposes by operators, one such operator in this capacity being Red Bull.[7] While not being considered a visually attractive helicopter by some pilots; the Bo 105 was known for possessing steady, responsive controls and a good flight attitude.[2] Most models could perform steep dives, rolls, loops, turnovers, and various acrobatic maneuvers, according to MBB the B0 105 is cleared for up to 3.5 positive G force and one negative.[8] The Bo 105's agility and responsiveness can be partly attributed to its rigid rotor blade design, a feature uncommon on competing helicopters throughout the Bo 105's production life.[9]

Perhaps the most significant feature of the Bo 105 is the design of the rotor blades and rotor head. The rotor system is entirely hingeless, the rotor head consisting of a solid titanium block to which the four blades are bolted;[10] the flexibility of the rotor blades works to absorb movements typically necessitating hinges in most helicopter rotor designs.[8] The reliability of the advanced rotor system is that, in over six million operating hours across the fleet, there had been a total of zero failures.[11] One benefit of the Bo 105's handling and control style is superior takeoff performance, including significant resistance to catastrophic dynamic rollover;[9] a combination of weight and the twin-engined configuration enables a rapid ascent in a performance takeoff.[12]

Military operators would commonly operate the type at a very low altitude to minimise visibility to enemies, the Bo 105 being well matched to such operations as the helicopter's flight qualities effectively removed or greatly minimised several of the hazards such a flight profile could pose to pilots.[13] When outfitted with optional auxiliary fuel tanks, a basic model Bo 105 would have a flight endurance of roughly five hours under load.[12] 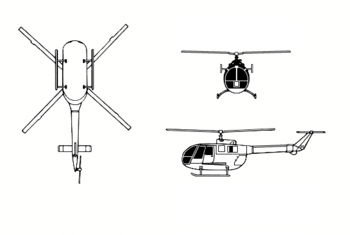