The M224 system is composed of the

The mount consists of a bipod and a base plate, which is provided with screw type elevating and traversing mechanisms to elevate/traverse the mortar. The M64A1 sight unit is attached to the bipod mount. The mortar can be fired in the conventional mode or the handheld mode. This smooth-bore system can be gravity-fired or fired by using a manual spring-loaded firing system.

It is typically fielded at the infantry company level.

In 2011, an improved M224A1 version was brought into service. The M224A1 consists of the M225A1 tube, M170A1 bipod assembly, M7A1 baseplate, M8 auxiliary baseplate and the M64A1 sight unit. By reducing the number of components and using lighter materials, such as aluminium and Kevlar reinforced composites, the mortar system weighs 20% less with a reduction of 9.3 lb (4 kg). The US Army plans to replace all legacy M224s with the new M224A1.[2][3] Concurrently, a lighter version of the 81mm M252 mortar is being developed.

The M224 Mortar can fire the following principal classifications of training and service ammunition:

The M224 rounds have three fuse types: The Multioption Fuze (M734) and the Point-Detonating Fuze (M525), and Timer. The M734 is used for the M720 HE round and can be set to function as proximity burst, near-surface burst, impact burst, or delay burst. 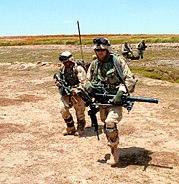