The M-84 is a main battle tank manufactured by the Socialist Federal Republic of Yugoslavia. The M-84 is in service in Bosnia and Herzegovina, Croatia, Kuwait, Slovenia and Serbia.

The M-84 main battle tank is a Yugoslavian version of the Soviet T-72. Some improvements over the T-72 include a domestic fire-control system, improved composite armor, and a 1000-hp engine. The M-84 entered service with the Yugoslav People's Army in 1984. The improved M-84A version entered service a few years later.

In the late 1980s, a project for a replacement tank called the Vihor (Whirlwind) was started. Unlike the M-84, the Vihor was not a copy of a Soviet tank, but a new design from scratch. However, due to the disintegration of Yugoslavia, the Vihor project was abandoned.

The latest Serbian version of the M-84 is the M-84AS, unveiled in 2004. It features a new fire control system, Kontakt-5 ERA armor, AT-11 Sniper anti-tank missiles, Agava-2 thermal sight, and the Shtora defensive suite. It is very similar to the Russian T-90S, both in appearance and in capability.

Croatia developed a highly modernized prototype version of the M-84 under the designation M-95 Degman. The M-84D will be the series production version, essentially an M-95 Degman with minor changes and upgrades to which standard all Croatian M-84s and T-72s will be brought.

About 150 M-84 tanks have been exported to Kuwait. About $500 million was earned from the sale in 1990-91, representing the Yugoslav military industry's most successful export at the time. The disintegration of Yugoslavia in 1991 prevented all further exports. Kuwait in fact ordered 215 tanks but the whole number never came. Croatia is now in negotiations with Kuwait to modernize their fleet to the M-84D standard and to produce and sell another 65 M-84D tanks.

Libya ordered ~200 M-84 MBTs from Yugoslavia, which were manufactured but not delivered due to the outbreak of war in Yugoslavia. During the 1990s, the Pakistan Army was interested in buying a number of M-84 main battle tanks from Yugoslavia. One tank was sent to Pakistan for testing and Pakistani commanders seemed satisfied with the tank, but the deal was never made because of the situation in Yugoslavia during that period.

The M-84A is armed with a 2A46 125mm smooth bore cannon. The gas cylinder positioned in the middle of the barrel is shielded with a thermal coating that minimizes deformation of the barrel from high temperatures and ensures it is cooled at the same rate during rapid firing. The M84 uses an automatic loader, which enables it to sustain a firing rate of 8 rounds per minute.

The cannon's ammunition is stowed underneath the turret (40 rounds) within the hull of the tank. This concept was inherited from the original Soviet design for T-72 and is arguably the tank's greatest flaw. While it enables fast rates of fire, it also makes the M-84 vulnerable. This weakness was exploited by Croatian soldiers in the Croatian War of Independence to the detriment of the YPA's tank crews. In later stages of the conflict, losses were reduced by adjusting and improving tactics.

Along with its primary armament, the M-84 is also armed with one 7.62mm M86 coaxial machine gun, and one 12.7mm M87 anti-aircraft machine gun mounted on the commander's turret.

All versions of the M-84 have a crew of three. The commander sits on the right side of the turret, the gunner on the left, and the driver sits centrally at the front end of the vehicle. Like most Soviet derived vehicles, the M-84 series of tanks do not have a loader, due to the tank's autoloader.

The tank can ford 1.2 meters of water at any time, or up to 5 meters with a proper snorkel applied.

In 2005, the Yugoimport SDPR displayed its new MBT, M-84AS, a largely modernized variant of the M-84AB tank. This new tank is equipped with an improved fire-control system with integrated day/night sight. The M84AS gun was replaced with a similar but improved gun which, along with better control characteristics, enables easy and fast replacement of the cannon barrel in field conditions. The M-84AS tank is able to fire Anti-tank guided missiles with laser guidance through the barrel, which enables accurate engagement of enemy tanks up to 9 km.

The M-84AS is equipped with Non-explosive and non-energetic reactive armour (NERA) which offers protection against modern tandem cumulative warheads. Beside better armor, the new tank is equipped with modern electro-optical system for defense against wire and laser guided anti-tank missiles.

The M-84 in its very nature is nearly identical to the Soviet T-72, upon which it is based. However, Yugoslavia was not the only one to wish to license-produce a T-72 variant for its armed forces. Other former Eastern Bloc nations, as well as successor states to the Soviet Union, today produce tanks very similar to the M-84 and its offshoots.

The 3rd-generation Russian T-90 MBT is highly comparable to the Serbian M-84AS. The majority of the M-84AS parts come directly from Russia, insuring a high degree of similarity and interchangeability.

Several months prior to the Gulf War (Operation Desert Storm), Kuwait ordered 170 M-84ABs, 15 M-84ABI ARVs and 15 command M-84ABK tanks, from the Socialist Federal Republic of Yugoslavia, in order to replace older British tanks. After the signature of the contract, four M-84A tanks were taken from Niš military camp and delivered, however the Iraqi Army soon captured them, during the occupation. Further deliveries were stopped for the duration of the invasion. The Kuwaiti 35th Al-Shaheed Armoured Brigade, is equipped with 70 M-84s in its "order of battle".During The Battle of The Bridges, the 35th brigade did not directly take part in battles with Iraqi tanks because the M-84s were very similar to T-72s. The M-84 was however very effective against T-62s and T-55s, and it was very simple to operate. In a recent new tank acquisition tender, involving the Polish PT-91 Twardy, US M1A2 Abrams, and two variants of the M-84, the Croatian M-95 Degman and the Serbian M-84 AB1, the Kuwaiti Army only responded to the Croatian bid, allowing the rest to expire.[2] The Kuwaiti army currently has 146 M-84AB MBTs, 3 M-84ABK command tanks and 3 M-84ABN tanks in its inventory.

During the Ten-Day War in Slovenia, М-84 tanks serving with the Yugoslav People's Army (YPA) units were tasked with opening border/frontier posts and regaining control over all Yugoslav borders. Given the fact that Slovenia had no army at the time and no armoured units the JNA saw no need to deploy M-84 tanks at the frontier and instead were used for psychological intimidation.

Nonetheless, M-84s saw some action. They were commonly used to break through barricades with varying degrees of success.

The YPA lost some 20 M-84s to insurgent tactics and some 60 tanks. Slovenia inherited all the M-84s within its territory, once the ceasefire and Slovenia's independence was accepted.

The M-84 saw action in the Battle of Vukovar, where the JNA, perhaps naively deployed large columns of Main battle tanks without the support of the infantry. Tanks and APC's found themselves extremely exposed and suffered significant losses. The Croatian Army had captured about 50 M-84 MBTs from Yugoslav Peoples Army during the Battle of the Barracks.

During the war in Bosnia, M-84's saw little action; the mainstay of all 3 warring parties was the T-55. At the beginning of war, JNA units located in Bosnia and Herzegovina had passed all their equipment to the Army of Republika Srpska (VRS). The VRS had about several dozen M-84's with the Army of Bosnia and Herzegovina managing to capture only three M-84's. A number of M-84 tanks were used during the Siege of Sarajevo, as well during smaller localized conflicts. The number of M-84 tanks destroyed during the Bosnian war is unknown.

During the Kosovo war, the М-84 was used by the 211th and 252nd armored Brigades of the Yugoslav Army (now Serbian Land Forces). They were placed in reserves units should NATO have resorted to a ground invasion in Kosovo and Metohija.

NATO had originally claimed to have destroyed some 300 Yugoslav armoured units (26% of its entire force), but later withdrew their claims after it was obvious that the air campaign against military ground units had failed and the shocking images of the Yugoslav army withdrawing in a large and orderly fashion while passing NATO troops, along with documented proof to counter NATO claims. NATO now accepts that only 14 of the original 300 targets were destroyed by NATO air strikes. Of that number, 9 were M-84s and 5 T-55s destroyed both by NATO aviation and KLA insurgents.

The army used tactics to conceal their forces throughout Serbia and place countless dummy targets in their midst ranging from tanks, camps, bridges, roads, anti-aircraft units and other potential targets. M-84s saw their most recent action during Preševo Valley conflict, when the Yugoslav army and Serbian special police forces fought against UCPMB separatists.

Republic of Bosnia and Herzegovina 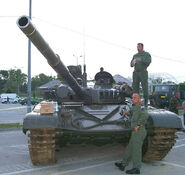