The Lockheed Martin RQ-170 Sentinel is an American unmanned aerial vehicle (UAV) developed by Lockheed Martin and operated by the United States Air Force for the Central Intelligence Agency (CIA). While the USAF has released few details on the UAV's design or capabilities, defense analysts believe that it is a stealth aircraft fitted with aerial reconnaissance equipment. More images and details on the aircraft were released after Iran captured a RQ-170 in 2011.

The RQ-170 Sentinel was developed by Lockheed Martin's Skunk Works as a stealth unmanned aerial vehicle (UAV). Journalists have noted design similarities between the RQ-170 and previous stealth and UAV programs such as the RQ-3 DarkStar and Polecat.[2][3] It is a tailless flying wing aircraft, with pods, presumably for sensors or SATCOMs, built into the upper surface of each wing. Few details of the UAV's characteristics have been released, but estimates of its wingspan range from approximately 65 feet (20 m)[4] to 90 feet (27 m).[5] In a December 2012 report, journalist David Axe stated that "20 or so" RQ-170s had been built.[1]

The "RQ" designation indicates that the RQ-170 Sentinel does not carry weapons.[6] Aviation Week's David A. Fulghum believes that the UAV is probably a "tactical, operations-oriented platform and not a strategic intelligence-gathering design".[4]

The USAF confirmed the "grainy photos of a gray, flying-wing-typed unmanned airplane near Kandahar Airfield."[7] Since then, this aircraft has been known as "The Beast of Kandahar" in relation to the discussion of the RQ-170 Sentinel on 4 December 2009.[4][8] A USAF colonel subsequently commented that RQ-170 is separate from the MQ-X program, which has yet to determine stealth or powerplant requirements, and thus the Sentinel will not replace the MQ-1 Predator and MQ-9 Reaper drones.[9] As of May 2011[update], the U.S. military had not released any statements concerning the Sentinel since December 2009.[10]

The RQ-170 is a flying wing design containing a single (as yet classified) engine and is estimated by Aviation Week as having a wingspan of approximately 66 feet (20 m).[11] Its takeoff weight is estimated as being greater than the RQ-3 DarkStar's, which was 8,500 pounds (3,900 kg). The design lacks several elements common to stealth engineering such as zig-zag edged landing gear doors and sharp leading edges, and the exhaust is not shielded by the wing.[11] Aviation Week postulates that these elements suggest the designers have avoided 'highly sensitive technologies' due to the near certainty of eventual operational loss inherent with a single engine design and a desire to avoid the risk of compromising leading edge technology.[11] The publication also suggests that the medium-grey color implies a mid-altitude ceiling, unlikely to exceed 50,000 feet (15,000 m) since a higher ceiling would normally be painted darker for best concealment.[11] The postulated weight and ceiling parameters suggests the possible use of a General Electric TF34 engine, or a variant, in the airframe.[11]

On the basis of the few publicly available photographs of the RQ-170, aviation expert Bill Sweetman has assessed that the UAV is equipped with an electro-optical/infrared sensor and possibly an active electronically scanned array (AESA) radar mounted in its belly fairing. He has also speculated that the two undercarriage fairings over the UAV's wings may house datalinks and that the belly fairing could be designed for modular payloads, allowing the UAV to be used for strike missions and/or electronic warfare.[12] The New York Times has reported that the RQ-170 is "almost certainly" equipped with communications intercept equipment as well as highly sensitive sensors capable of detecting very small amounts of radioactive isotopes and chemicals which may indicate the existence of nuclear weapons facilities.[13]

Following Iranian claims of downing an RQ-170 near the Afghan border in December 2011, Iranian TV showed video footage of what appears to be an advanced unmanned U.S. aircraft that most closely resembles the RQ-170 UAV. In the footage, a member of the Iranian Revolutionary Guard released dimensions of the aircraft, including a wingspan of about 26 metres (85 ft), a height of 1.84 metres (6.0 ft), and a length of 4.5 metres (15 ft).[14]

The 30th Reconnaissance Squadron operates RQ-170 Sentinels. This squadron, which is based at Tonopah Test Range Airport in Nevada, was activated on 1 September 2005. RQ-170 Sentinels have been deployed to Afghanistan, where one was sighted at Kandahar International Airport in late 2007.[4] This sighting, and the Sentinel's secret status at the time, led Bill Sweetman to dub it the "Beast of Kandahar".[15] The UAV being deployed to Afghanistan, despite the Taliban having no radar, led to speculation that the aircraft was used to spy on Pakistan or Iran: "Phil Finnegan, a UAV analyst at the Teal Group, an aerospace consulting firm, suggests the stealth capabilities are being used to fly in nearby countries. Neighboring Iran has an air force and air defense system that would require stealth technology to penetrate."[16][17]

In December 2009, South Korea's JoongAng Daily newspaper reported that the RQ-170 Sentinel had been test-flown in South Korea for the past few months and that it was expected that they would be permanently deployed in 2010 to replace Lockheed U-2 reconnaissance aircraft operating from Osan Air Base.[18] In response to this report, Bill Sweetman argued that the Sentinel's deployments to Afghanistan and South Korea were probably undertaken to monitor Pakistan and North Korea's ballistic missile programs.[19]

In August 2010, Aviation Week reported that RQ-170s either had been or were about to be redeployed to Afghanistan and that the UAVs had been fitted with a full motion video capability.[20] The missions performed by these aircraft included flying dozens of high-altitude sorties over Pakistan to monitor a compound in the town of Abbottabad where Osama bin Laden was believed to be living. On 2 May 2011, at least one RQ-170 monitored the area while elements of the United States Naval Special Warfare Development Group launched an assault on the compound which resulted in bin Laden's death. The aircraft provided footage of the attack which was watched live by President Barack Obama and his senior national security advisors. The RQ-170 also monitored Pakistani military radio transmissions in the area to provide warning of the response to the attack.[21] On 27 May the Los Angeles Times reported that Pakistani officials were "alarmed" by the use of the RQ-170 over their country as the drones are "designed to evade radar and other surveillance systems, and can be used as a spy plane".[22]

In October 2012 a RQ-170 was used to conduct bomb damage assessment for a test drop of a Massive Ordnance Penetrator bomb from a Northrop Grumman B-2 Spirit stealth bomber.[23]

On 4 December 2011, media reports stated that the Iranian Army's electronic warfare unit[24][25][26][27] had downed an RQ-170 that violated Iranian airspace along its eastern border through overriding its controls, and had captured the lightly damaged UAV.[28] On 6 December, U.S. officials acknowledged that a drone crashed in or near Iranian airspace and that it belonged to the CIA and not to ISAF as was earlier stated.[29]

The Iranian government released footage of a captured RQ-170 on 8 December.[30] After examining the video on 8 December, U.S. officials confirmed that the drone was genuine.[31][32] In April 2012, General Amir Ali Hajizadeh, the commander of the Islamic Revolutionary Guard Corps aerospace division, claimed that Iran had reverse-engineered the RQ-170, and was building a copy of the UAV. He also stated that data was being recovered from the captured RQ-170.[33][34][35] The semi-official Tasnim news agency of Iran reported in September 2016 that a UAV named Saegheh, similar in appearance to the RQ-170 Sentinel, had been built. It was said to be able to carry four precision-guided bombs; range was not stated.[36] 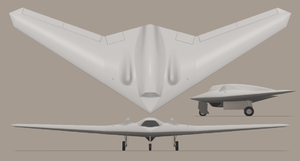