Military Wiki
Register
Don't have an account?
Sign In
Advertisement
in: Pages containing cite templates with deprecated parameters, Articles with bare URLs for citations from November 2021, Articles incorporating text from Wikipedia,
and 3 more

View source
watch 01:25
Jurassic World: Dominion Dominates Fandom Wikis - The Loop
Do you like this video?
Play Sound
For a list of ships no longer in service with the Royal Navy, see List of ship names of the Royal Navy.

The Royal Navy is the principal naval warfare service branch of the British Armed Forces. As of April 2022, there are 72 commissioned ships in the Royal Navy.

The Royal Navy operates four bases where commissioned ships are based: HMNB Portsmouth, HMNB Devonport and HMNB Clyde and the Royal Navy's newest base, HMS Jufair in Bahrain.[1] In addition, a number of commissioned vessels belonging to the University Royal Naval Units (URNU) are stationed at various locations around the United Kingdom, and two patrol vessels form part of the Gibraltar Squadron and are permanently based there.

Besides the Royal Navy, the Royal Fleet Auxiliary (RFA) and the Royal Marines operate their own flotillas of vessels which complement the assets of the Royal Navy, however they are not included in this list or the above figures (the Royal Navy and RFA combined have 83 vessels with a total displacement in excess of 760,500 tonnes). In addition, the naval training vessels Brecon and Cromer can be found based at the Royal Navy shore establishment HMS Raleigh and the Britannia Royal Naval College, respectively, along with a number of P1000s and Motor Whalers.[2][3] As a supporting contingent of Her Majesty's Naval Service, the civilian Marine Services operate many auxiliary ships (including coastal logistics, tugs and research vessels) in support of Royal Navy and Royal Fleet Auxiliary operations.[4] (with a total displacement in excess of 815,000 tonnes).

Flagship of the First Sea Lord 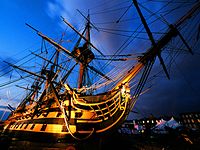 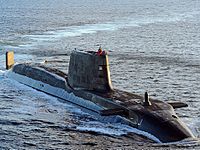 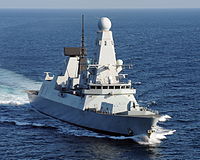 In addition to the above vessels, the Border Force possess five cutters.