The monarchs of the Kingdom of France ruled from the establishment of the Kingdom of the West Franks in 843 until the fall of the Second French Empire in 1870, with several interruptions. Between the period from King Charles the Bald in 843 to King Louis XVI in 1792, France had 45 kings. Adding the 7 emperors and kings after the French Revolution, this comes to a total of 52 monarchs of France.

In August 843 the Treaty of Verdun divided the Frankish realm into three kingdoms, one of which (Middle Francia) was short-lived; the other two evolved into France (West Francia) and, eventually, Germany (East Francia). By this time the eastern and western parts of the land already had different languages and cultures.

The Capetian dynasty, the male-line descendants of Hugh Capet, included the first rulers to adopt the title of 'King of France' for the first time with Philip II (r. 1180–1223). The Capetians ruled continuously from 987 to 1792 and again from 1814 to 1848. The branches of the dynasty which ruled after 1328, however, are generally given the specific branch names of Valois (until 1589) and Bourbon (from 1589).

During the brief period when the French Constitution of 1791 was in effect (1791–92) and after the July Revolution in 1830, the style of "King of the French" was used instead of "King of France (and Navarre)". It was a constitutional innovation known as popular monarchy, which linked the monarch's title to the French people rather than to the possession of the territory of France.[1]

The title "King of the Franks" (Latin language: Rex Francorum) gradually lost ground after 1190, during the reign of Philip II (but FRANCORUM REX continued to be used, for example by Louis XII in 1499, by Francis I in 1515, and by Henry II about 1550). It was used on coins up to the eighteenth century.[lower-alpha 1] During the brief period when the French Constitution of 1791 was in effect (1791–1792) and after the July Revolution in 1830, the style "King of the French" was used instead of "King of France (and Navarre)". It was a constitutional innovation known as popular monarchy which linked the monarch's title to the French people rather than to the possession of the territory of France.[1]

The Carolingian dynasty was a Frankish noble family with origins in the Arnulfing and Pippinid clans of the 7th century AD. The family consolidated its power in the 8th century, eventually making the offices of mayor of the palace and dux et princeps Francorum hereditary and becoming the real powers behind the Merovingian kings. The dynasty is named after one of these mayors of the palace, Charles Martel, whose son Pepin the Short dethroned the Merovingians in 751 and, with the consent of the Papacy and the aristocracy, was crowned King of the Franks.[5] Pepin's great-grandson Charles the Bald was king at the time of the Treaty of Verdun (843) (for earlier rulers, see List of Frankish kings).

The Robertians were Frankish noblemen owing fealty to the Carolingians, and ancestors of the subsequent Capetian dynasty. Odo (Eudes), Count of Paris, was chosen by the western Franks to be their king following the removal of emperor Charles the Fat. He was crowned at Compiègne in February 888 by Walter, Archbishop of Sens.[6]

Charles, the posthumous son of Louis II, was crowned by a faction opposed to the Robertian Odo at Reims Cathedral in 893, though he only became the effectual monarch with the death of Odo in 898.[7] He was deposed and died in captivity.

The Bosonids were a noble family descended from Boso the Elder. A member of the family, Rudolph (Raoul), was elected "King of the Franks" in 923.

After the death of Louis V, Hugh Capet, the son of Hugh the Great and grandson of Robert I, was elected by the nobility as king of France. The Capetian Dynasty, the male-line descendants of Hugh Capet, ruled France continuously from 987 to 1792 and again from 1814 to 1848. They were agnatic descendants of the Robertian kings. The cadet branches of the dynasty which ruled after 1328, however, are generally given the specific branch names of Valois and Bourbon.

Kings not listed below are Hugh Magnus, eldest son of Robert II, and Philip, eldest son of Louis VI; both were co-kings with their fathers (in accordance with the early Capetian practice whereby kings would crown their eldest son in their own lifetimes and share power with the co-king), but predeceased them. Because neither Hugh nor Philip were sole or senior king in their own lifetimes, they are not traditionally listed as kings of France and are not given ordinals.

Henry VI of England, son of Catherine of Valois, became titular king of France upon his grandfather Charles VI's death in accordance with the Treaty of Troyes of 1420; however this was disputed and he is not always regarded as a legitimate king of France. English claims to the French throne actually date from 1328, when Edward III claimed the throne after the death of Charles IV. Other than Henry VI, none had ever had their claim backed by treaty, and his title became contested after 1429, when Charles VII was crowned. Henry himself was crowned by a different faction in 1431, though at the age of 10, he had yet to come of age. The final phase of the Hundred Years War was fought between these competing factions, resulting in a Valois victory at the Battle of Castillon in 1453, putting an end to any meaningful claims of the English monarchs over the throne of France, though English and later British monarchs would continue to use the title "King of France" until 1801.

From 21 January 1793 to 8 June 1795, Louis XVI's son Louis-Charles was the titular king of France as Louis XVII; in reality, however, he was imprisoned in the Temple throughout this time, and power was held by the leaders of the Republic. Upon Louis XVII's death, his uncle Louis-Stanislas (Louis XVI's brother) claimed the throne, as Louis XVIII, but only became de facto king in 1814.

The death of Charles IV started the Hundred Years' War between the House of Valois and the House of Plantagenet later the House of Lancaster over control of the French throne.[8] The Valois claimed the right to the succession by male-only primogeniture through the ancient Salic Law, having the closest all-male line of descent from a recent French king. They were descended from the third son of Philip III, Charles, Count of Valois. The Plantagenets-based their claim on being closer to a more recent French king, Edward III of England being a grandson of Philip IV through his mother, Isabella. The two houses fought the Hundred Years War to enforce their claims; the Valois were ultimately successful, and French historiography counts their leaders as rightful kings. One Plantagenet, Henry VI of England, did enjoy de jure control of the French throne under the terms of the Treaty of Troyes, which formed the basis for continued English claims to the throne of France until 1801. The Valois line would rule France until the line became extinct in 1589, in the backdrop of the French Wars of Religion. As Navarre did not have a tradition of male-only primogeniture, the Navarrese monarchy became distinct from the French, with Joan II, a daughter of Louis X, inheriting there.

From 1340 to 1360 and from 1369 to 1801 the Kings of England and Great Britain claimed the title of King of France. Under the terms of the 1420 Treaty of Troyes, Charles VI had recognized his son-in-law Henry V of England as regent and heir. Henry V predeceased Charles VI and so Henry V's son, Henry VI, succeeded his grandfather Charles VI as King of France. Most of Northern France was under English control until 1435 but by 1453 the English had been expelled from all of France save Calais and the Channel Islands. Calais itself fell in 1558. Nevertheless, English and then British monarchs continued to claim the title for themselves until the creation of the United Kingdom in 1801.

The Valois line looked strong on the death of Henry II, who left four male heirs. His first son, Francis II, died in his minority. His second son, Charles IX, had no legitimate sons to inherit. Following the assassination of his third son, the childless Henry III, and the premature death of his fourth son Hercule François, France was plunged into a succession crisis over which distant cousin of the king would inherit the throne. The best claimant, King Henry III of Navarre, was a Protestant, and thus unacceptable to much of the French nobility. Ultimately, after winning numerous battles in defence of his claim, Henry converted to Catholicism and was crowned as king Henry IV, founding the House of Bourbon. This marked the second time the thrones of Navarre and France were united under one monarch; as different inheritance laws had caused them to become separated during the events of the Hundred Years Wars. The House of Bourbon would be overthrown during the French Revolution and replaced by a short-lived republic.

The French First Republic lasted from 1792 to 1804, after which its popular First Consul, Napoléon Bonaparte, decided to make France a monarchy again. He took the popular title Emperor of the French instead of King of France and Navarre or King of the French to avoid all titles of the Kingdom of France making France's second popular monarchy.

Following the first defeat of Napoleon and his exile to Elba, the Bourbon monarchy was restored, with Louis XVI's younger brother Louis Stanislas being crowned as Louis XVIII. Louis XVI's son had been considered by monarchists as Louis XVII but he was never crowned and never ruled in his own right before his own death. He is not usually counted among French monarchs, creating a gap in numbering on most traditional lists of French kings. Napoleon would briefly regain control of the country during his Hundred Days rule in 1815. After his final defeat at the Battle of Waterloo, Napoleon attempted to abdicate in favour of his son but the Bourbon Monarchy was re-established yet again and would continue to rule France until the July Revolution of 1830, replaced it with a cadet branch, the House of Orleans.

The Bourbon Restoration came to an end with the July Revolution of 1830 which deposed Charles X and replaced him with Louis Philippe I, a distant cousin with more liberal politics. Charles X's son Louis signed a document renouncing his own right to the throne only after a 20-minute argument with his father. Because he was never crowned he is disputed as a genuine king of France.[9] Louis's nephew Henry was likewise considered by some to be Henry V but the new regime did not recognise his claim and he never ruled.

Under Louis Philippe, the popular monarchy of France changed the styles and forms of the ancien régime, replacing them with more populist forms like replacing "King of France" with "King of the French").

Over the years Louis Philippe grew more conservative. When a revolution broke out he fled to Great Britain leaving his grandson Prince Philippe, Count of Paris as King of the French. Two days later the Second French Republic was declared. He was never proclaimed, making him disputed as a genuine monarch.[citation needed]

The French Second Republic lasted from 1848 to 1852, when its president, Louis-Napoléon Bonaparte, was declared Emperor of the French. He took the regnal name of Napoleon III after his uncle (Napoleon I) and his cousin (Napoleon II, who was declared but uncrowned as heir to the Imperial throne).

Napoleon III would later be overthrown during the events of the Franco-Prussian War. He was the last monarch to rule France. After that the country was ruled by a succession of republican governments (see French Third Republic).

Various pretenders descended from the preceding monarchs have claimed to be the legitimate monarch of France, rejecting the claims of the president of France, and of each other. These groups are: 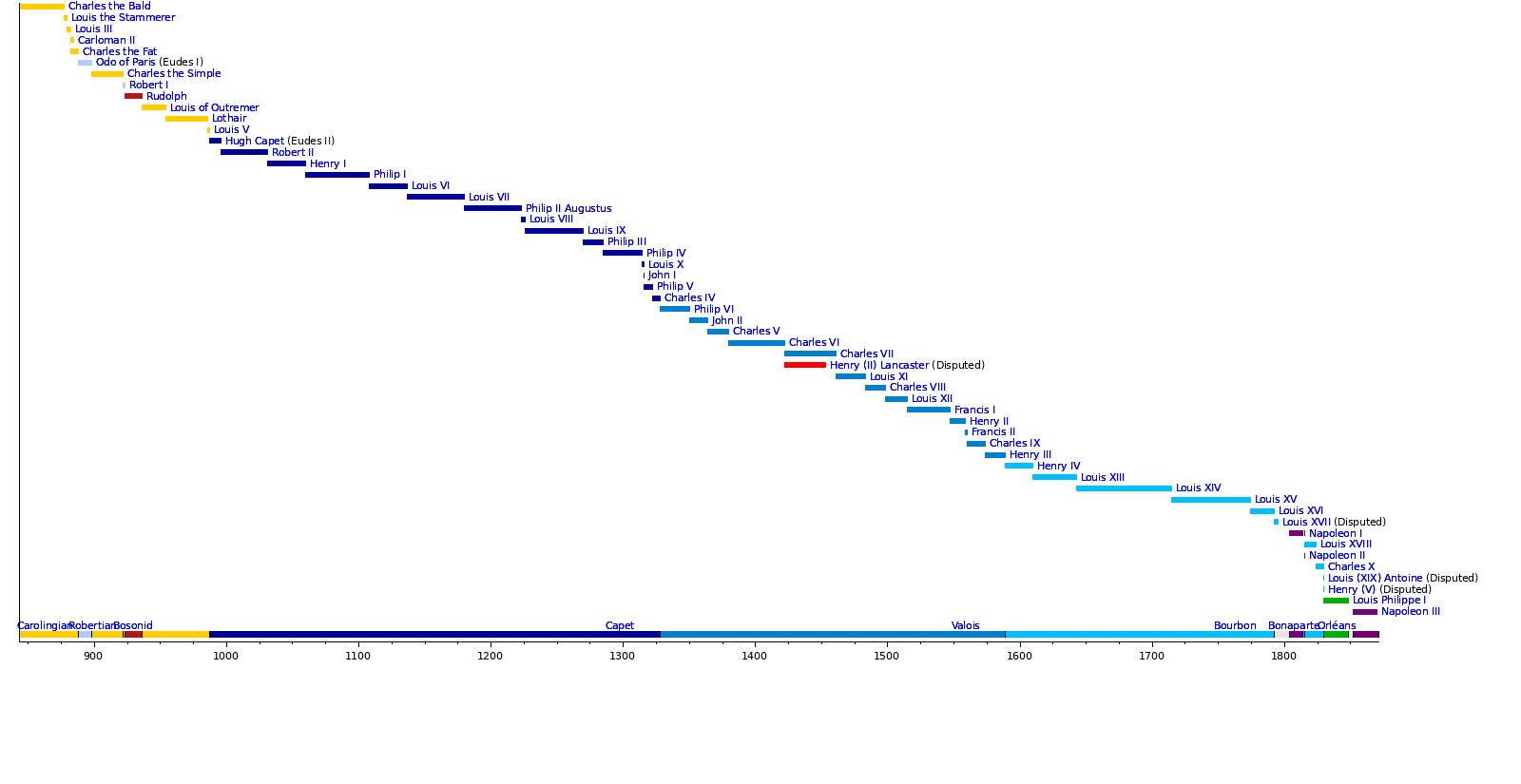