Before the 19th century

As artillery pieces developed trunnions and were placed on carriages featuring two wheels and a trail, a limber was devised. This was a simple cart with a pintle. When the piece was to be towed, it was raised over the limber and then lowered, with the pintle fitting into a hole in the trail. Horses or other draft animals were harnessed in single file to haul the limber.[2] There was no provision for carrying ammunition on the limber, but an ammunition chest was often carried between the two pieces of the trail.[3]

The British developed a new system of carriages, which was adopted by the French, then copied from the French by the United States.[4]

During the American Civil War, U.S. Army equipment was identical to Confederate Army equipment, essentially identical to French equipment, and similar to that of other nations. The field-artillery limber assumed its archetypal form – two wheels, an ammunition chest, a pintle hook at the rear, and a central pole with horses harnessed on either side. The artillery piece had an iron ring (lunette) at the end of the trail. To move the piece, the lunette was dropped over the pintle hook (which resembles a modern trailer hitch). The connection was secured by inserting a pintle hook key into the pintle.

The quantity of ammunition in the chest, which could be detached from the limber, depended on the size of the piece. An ammunition chest for the M1857 light 12-pounder gun (“Napoleon”) carried 28 rounds. The cover of the ammunition chest was covered in sheet copper to prevent stray embers from setting the chest on fire.

Six horses were the preferred team for a field piece, with four being considered the minimum team. Horses were harnessed in pairs on either side of the limber pole. A driver rode on each left-hand (“near”) horse and held reins for both the horse he rode and the horse to his right (the "off horse").

In addition to hauling the artillery piece, the limber also hauled the caisson, a two-wheeled cart that carried two extra ammunition chests, a spare wheel and extra limber pole slung beneath. There was one caisson for each artillery piece in a battery. The cannoneers could ride the ammunition chests on the limbers and the caisson when speed was required, but to do so for any length of time was too tiring for the horses, so cannoneers generally walked. The exception to this rule would be in horse-artillery batteries, where the cannoneers rode saddle horses.

Siege-artillery limbers, unlike field-artillery limbers, did not have an ammunition chest. Siege-artillery limbers resembled their predecessors: they were two-wheeled carts with a pintle, now somewhat behind the axle. When the piece was to be hauled, the trail was raised above the limber, then lowered, with the pintle fitting into a hole in the trail. Unlike the situation with its predecessors, horses were harnessed to the 19th-century limber in pairs, with six to ten horses needed to haul a siege gun or howitzer.[6]

With the general passing of the horse as a mover of artillery, the need for limbers and caissons also largely passed. Trucks or artillery tractors could tow artillery pieces but did not completely take over until after the end of the Second World War. Many armies retained limbers seemingly from sheer inertia.[citation needed] As a field artillery piece, the British 25-pdr was generally used with a Trailer which carried 32 rounds of ammunition though it could be towed without the limber.

Some simple limbers were kept for heavier pieces such as the 8 inch Howitzer M1 to achieve better weight distribution. 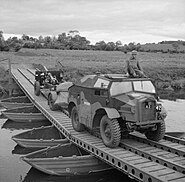 25-pdr field gun and limber being towed by a Morris Commercial Quad.

Image of limber, with caption in Russian. 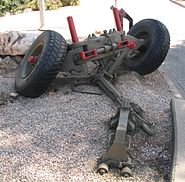 Caissons in American and British culture

The song "The Caissons Go Rolling Along" refers to these; the version adopted as the US Army's official song has, among other changes, replaced the word caissons with Army.

Caissons are used for burials at Arlington National Cemetery and for state funerals for United States government dignitaries including the President of the United States for the remains to be carried by members of The Old Guard's Caisson Platoon. When the equipage is used in this way for a state funeral in Britain, the coffin is usually placed on a platform mounted on top of the gun and referred to as being carried on a gun carriage. For the funerals of British monarchs, there is a tradition that the horses be replaced by a detail from the Royal Navy.