The Tank, Light, Mk VI was a British light tank, produced by Vickers-Armstrongs in the late 1930s, which saw service during World War II.

The Tank, Light, Mk VI was the sixth in the line of light tanks built by Vickers-Armstrongs for the British Army during the interwar period. The company had achieved a degree of standardization with their previous five models, and the Mark VI was identical in all but a few respects. The turret, which had been expanded in the Mk V to allow a three-man crew to operate the tank, was further expanded to give room in its rear for a wireless set.[4] The weight of the tank was increased to 10,800 pounds (4,900 kg), which although heavier than previous models actually improved its handling characteristics, and an 88 horsepower (66 kW) engine was added to the model to increase its maximum speed to 35 miles per hour (56 km/h).[1] It had the Horstmann coil-spring suspension system which was found to be durable and reliable, although the fact that the tank was short in relation to its width and that it pitched violently on rough ground made accurate gunnery whilst moving exceptionally difficult.[3] The Mk VI possessed a crew of three consisting of a driver, gunner and commander who also doubled as the radio operator, between 4 millimetres (0.16 in) and 14 millimetres (0.55 in) of armour, which could resist rifle and machine gun bullets, and its armament consisted of one water-cooled .303 inch and one .50 inch Vickers machine gun.[3]

Production of the Mk VI began in 1936 and ended in 1940 with approximately 1,000 Mark VI tanks having been built.[5] Many of those produced were actually variants designed to solve problems found with the original design. The Mk VIA had a return roller removed from the top of the leading bogey and attached to the hull sides instead, and also possessed a faceted cupola.[6] The Mk VIB was mechanically identical to the Mk VIA but with a few minor differences to make production simpler, including a one-piece armoured louvre over the radiator instead of a two-piece louvre, and a plain circular cupola instead of the faceted type.[6] The Mk VIC, which was the last in the MK VI series, had the commanders cupola removed and had wider bogies and three carburettors to improve engine performance; it was also more powerfully armed than the other models, replacing the .303 and .50 Vickers machine guns with co-axial 15-millimetre (0.59 in) and 7.92-millimetre (0.312 in) Besa machine guns.[6] A small number of specialized variations were also built based on the Mk VI chassis. The Tank, Light, AA Mk I was built in the aftermath of the Battle of France and was intended to act as a counter-measure against attacks by German aircraft. It featured a power-operated turret fitted with four 7.92 mm Besa machine guns; a Mk II was produced which was mechanically similar but had improvements, such as better quality sights for the machine guns and a larger turret for easier access.[7] A variant on the Mk VIB was produced for service with the British Indian Army, in which the commanders cupola was removed and replaced with a hatch in the turret roof.[6]

When the Mk VI was first produced in 1936, the Imperial General Staff considered the tank to be superior to any light tank produced by other nations, and well suited to the dual roles of reconnaissance and colonial warfare.[8] Like many of its predecessors, the Mark VI was used by the British Army to perform imperial policing duties in British India and other colonies in the British Empire, a role for which it and the other Vickers-Armstrongs light tanks were found to be well suited.[1][9] When the British government began its rearmament process in 1937, the Mk VI was the only tank with which the War Office was ready to proceed with manufacturing; the development of a medium tank for the Army had hit severe problems after the cancellation of the proposed "Sixteen Tonner" medium tank in 1932 due to the costs involved, and cheaper models only existed as prototypes with a number of mechanical problems.[8] As a result of this, when the Second World War began in September 1939, the vast majority of the tanks available to the British Army were Mk VIs; there were 1,002 Mk VI Light Tanks, seventy-nine Mk I and Mk II Cruiser Tanks and sixty-seven Mk I Infantry Tanks. Of these tanks, only 196 light tanks and fifty Infantry Tanks were in use by operational units of the Army.[5]

When the Battle of France began in May 1940, the majority of the tanks possessed by the British Expeditionary Force were Mark VI variants; the seven Royal Armoured Corps divisional cavalry regiments, the principal armoured formations of the BEF, were each equipped with twenty-eight Mk IVs.[10] The 1st Armoured Division, elements of which landed in France in April, was equipped with 257 tanks, of which a large number were Mk VIB and Mk VICs.[11][12] The 3rd Royal Tank Regiment, which formed part of the division's 3rd Armoured Brigade, possessed by this time twenty-one Mark VI light tanks.[13]

The Mk VIb was also in action in North Africa against the Italians late in 1940 with the 3rd Hussars and the 7th Armoured division. Late in 1940, the British had 200 light tanks (presumably the Mk VIb) along with 75 medium tanks (A9, A10, A13) and 45 Matildas.[14] An attack by the 3rd Hussars on December 12, 1940 resulted in them getting bogged down in salt pans and severely mauled.[15] The 7th Armoured division had 100 left on January 3, 1941 and 120 tanks on January 21 at which time they were used in flanking far into the rear and gathering up scattered Italian troops, sometimes joining or leaving the main attacks to the Cruiser and Matilda tanks.[16] 2nd RTR continued to battle the Italians with light tanks as late as Feb 6, 1941.[17]

Light Tank Mk.VIA of the 3rd King's Own Hussars. 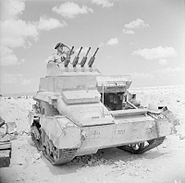 Vickers Light Tank Mk VIC knocked out during an engagement on 27 May 1940 in the Somme sector.