View source
This article is about the area in Paris. For the Paris metro station serving it, see Invalides (Paris Métro and RER).

Les Invalides (French pronunciation: ​[lezɛ̃valid]), officially known as L'Hôtel national des Invalides (The National Residence of the Invalids), is a complex of buildings in the 7th arrondissement of Paris, France, containing museums and monuments, all relating to the military history of France, as well as a hospital and a retirement home for war veterans, the building's original purpose. The buildings house the Musée de l'Armée, the military museum of the Army of France, the Musée des Plans-Reliefs, and the Musée d'Histoire Contemporaine, as well as the burial site for some of France's war heroes, notably Napoleon Bonaparte (lists below).

Louis XIV initiated the project by an order dated 24 November 1670, as a home and hospital for aged and unwell soldiers: the name is a shortened form of hôpital des invalides[citation needed]. The architect of Les Invalides was Libéral Bruant. The selected site was in the then suburban plain of Grenelle (plaine de Grenelle). By the time the enlarged project was completed in 1676, the river front measured 196 metres and the complex had fifteen courtyards, the largest being the cour d'honneur ("court of honour") for military parades. It was then felt that the veterans required a chapel. Jules Hardouin Mansart assisted the aged Bruant, and the chapel was finished in 1679 to Bruant's designs after the elder architect's death. The chapel is known as Église Saint-Louis des Invalides. Daily attendance was required.

Shortly after the veterans' chapel was completed, Louis XIV commissioned Mansart to construct a separate private royal chapel referred to as the Église du Dôme from its most striking feature (see gallery). Inspired by St. Peter's Basilica in Rome, the original for all Baroque domes, it is one of the triumphs of French Baroque architecture. Mansart raised its drum with an attic storey over its main cornice, and employed the paired columns motif in his more complicated rhythmic theme. The general programme is sculptural but tightly integrated, rich but balanced, consistently carried through, capping its vertical thrust firmly with a ribbed and hemispherical dome. The domed chapel is centrally placed to dominate the court of honour. It was finished in 1708.

The interior of the dome (see gallery) was painted by Le Brun's disciple Charles de La Fosse with a Baroque illusion of space (sotto in su) seen from below. The painting was completed in 1705[citation needed].

Because of its location and significance, the Invalides served as the scene for several key events in French history. On 14 July 1789 it was stormed by Parisian rioters who seized the cannons and muskets stored in its cellars to use against the Bastille later the same day. Napoleon was entombed under the dome of the Invalides with great ceremony in 1840. In December 1894 the degradation of Captain Alfred Dreyfus was held before the main building, while his subsequent rehabilitation ceremony took place in a courtyard of the complex in 1906. The building retained its primary function of a retirement home and hospital for military veterans (invalides) until the early twentieth century. In 1872 the musée d'artillerie (Artillery Museum) was located within the building to be joined by the musée historique des armées (Historical Museum of the Armies) in 1896. The two institutions were merged to form the present musée de l'armée in 1905. At the same time the veterans in residence were dispersed to smaller centres outside Paris. The reason was that the adoption of a mainly conscript army, after 1872, meant a substantial reduction in the numbers of veterans having the twenty or more years of military service formerly required to enter the Hôpital des Invalides. The building accordingly became too large for its original purpose. The modern complex does however still include the facilities detailed below for about a hundred elderly or incapacitated former soldiers.

On the north front of Les Invalides (illustration, right) Hardouin-Mansart's chapel dome is large enough to dominate the long façade, yet harmonizes with Bruant's door under an arched pediment. To the north, the courtyard (cour d'honneur) is extended by a wide public esplanade (Esplanade des Invalides) where the embassies of Austria and Finland are neighbours of the French Ministry of Foreign Affairs, all forming one of the grand open spaces in the heart of Paris. At its far end, the Pont Alexandre III links this grand urbanistic axis with the Petit Palais and the Grand Palais. The Pont des Invalides is next, downstream the Seine river. The Hôpital des Invalides spurred William III of England to emulation, in the military Greenwich Hospital of 1694. 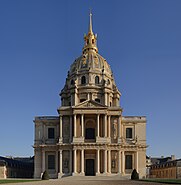 Court of the museum of the Army

According to an old tradition, war trophies decorate the vault of the chapel of Saint-Louis-des-Invalides. 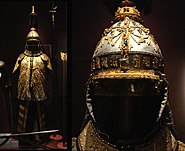 The most notable tomb at Les Invalides is that of Napoleon Bonaparte (1769–1821). Napoleon was initially interred on Saint Helena, but King Louis-Philippe arranged for his remains to be brought to France in 1840, an event known as le retour des cendres. Napoléon's remains were first buried in the Chapelle Saint-Jérôme in the Invalides until his final resting place, a tomb made of red quartzite and resting on a green granite base, was finished in 1861.

Some members of Napoleon's family, several military officers who served under him, and other French military heroes are also buried at Les Invalides:

The bodies of the following are interred in the vaults of Les Invalides:

The hearts of the following are interred in the vaults of Les Invalides while their bodies rest elsewhere: