Military Wiki
Register
Don't have an account?
Sign In
Advertisement
in: Articles incorporating text from Wikipedia, History of Argentina (1955–1973), 1960s in Argentina,
and 7 more

The valley is located between the "Martínez de Rozas Range" at the east and the (east) glaciers of the Southern Patagonian Ice Field at the west side and the lake get the waters of many rivers from the range and the glaciers and its waters flow through the de las Vueltas River (south side), to the Viedma lake and then to the Atlantic Ocean.

The contentious area was about 500 km2 of territory.

The British award of 1903 considered the demands of Chile and Argentina as irreconcilable and previous authorization of both governments draw a boundary between the extreme pretentions of the litigants. In the Laguna del Desierto region, the tribunal set the hito 62 (cornerstone) at the O'Higgins/San Martin Lake and draw the boundary from there to Fitz Roy mount over the "Martínez de Rozas Range" awarding Chile the complete valley of the Laguna del Desierto.

In 1946 through an aerial reconnaissance of the United States Air Force ordered by the Chilean government was known that the lagoon emptied to the Atlantic side. Chile and Argentina have to redraw its maps.

The initially organized labour support for 1963 elected Argentine President Illia turned to antagonism during 1964, as secret plans for Perón's return from exile took shape. Accordingly, CGT labor union head José Alonso called a general strike in May, and became a vocal opponent of the president's – this antagonism intensified after Perón's failed attempt to return in December, and during 1965, CGT leaders began publicly hinting at support for a coup.[1]

The triumph of the Peronists in March 1965 elections shook the Argentine Armed Forces, both among internal military factions linked to the Peronist movement, and in particular among the large section of the army which remained strongly anti-Peronist. In addition, a campaign against the government was also being carried out by important parts of the media, notably Primera Plana and Confirmado, the nation's leading newsmagazines. Seizing on minimally relevant events such as the President's refusal to support Operation Power Pack (Lyndon Johnson's ill-justified, April 1965 invasion of the Dominican Republic), Illia was nicknamed "the turtle" in both editorials and caricatures, and his rule was vaguely referred to as "slow," "dim-witted" and "lacking energy and decision," encouraging the military to take power and weakening the government even more; Confirmado went further, publicly exhorting the public to support a coup and publishing a (non-scientific) opinion poll touting public support for the illegal measure.[1]

On 4 October 1965, the Chilean settler Domingo Sepúlveda was instructed by Argentine gendarmes to regularize his settlement by the Argentine authorities in Río Gallegos. On 9 October Sepúlveda went to the Chilean Police station at the O'Higgins/San Martín Lake to denounce the Argentine requierement. On 17 October Carabineros sent a platoon to the zone and built an outpost in the property of Juana Sepúlveda and later a six men reconnaissance patrol was sent to a shelter 8 km farther south. They were Major Miguel Torres Fernández, Lieutenant Hernán Merino Correa, Sergeant Miguel Manríquez, the Lance-corporal Víctor Meza Durán and the Carabineros Julio Soto Jiménez and José Villagrán Garrido.[2]

On 30 October, Eduardo Frei Montalva and Arturo Illia, presidents of Chile and Argentina, met in Mendoza, Argentina and agreed to set back to the status quo before the Argentine requierement: withdraw the forces, no further buildings for Carabineros or Gendarmerie in the zone.

On the Argentine side, on 1 November the operation "Laguna del Desierto" under the command of Osiris Villegas[3] and Julio Rodolfo Alsogaray, chief of the V Division of the Argentine Army and Director of the Argentine gendarmerie resp., brought in several DC-3 flights the Gendarmerie squadron "Buenos Aires" from El Palomar Airport to the zone and later, on 3 November, the squadron Nr.43 was ordered from Río Turbio to meet the "Buenos Aires" in the zone. They were accompanied by journalists and photographs of the magazine "Gente y la Actualidad"[4][5]

On 6 November at 14:00 Major Torres got the order to go back to the police station. Two Carabineros, Soto and Villagrán, were ordered to bring the horses and the other four men prepared their return as, at 16:40, they were surrounded by approximately 90 Argentine Gendarmes. As the Chileans noted the ring and called to negotiate, Argentine forces shot Lieutenant Hernán Merino and injured Sergeant Miguel Manríquez.

Argentine forces deployed into the area to establish secure and covert positions overlooking the killing zone. The title seems to be unambiguous: they attacked. 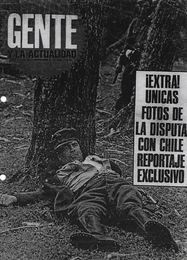 Sergeanto Manríquez lie seriously injured. In background, an Argentine gendarm with a handgun

Major Torres, Manríquez and Meza were captured and brought, as Merino's body, to Regimiento N° 181 de Combate of the Argentine Army in Río Gallegos, and 72 hours later freed and flew to Chile with an envoy of Presidente Frei, Juan Hamilton (then sub-secretary in the Ministry of the Interior and Public Security (Chile)).

The Chilean Ministry of Foreign Affairs, Gabriel Valdés, on 10 November 1965 called the killing of Merino "an unprecedented and unexcusable act in the history of our boundary disputes"[6]

In 1994 an international tribunal awarded almost the whole zone to Argentina. After a refused appeal, in 1995 Chile accepted the award.

Lieutenant Hernán Merino Correa became one of the best-known and emblematic Carabinero in Chile and the statements about him reveal that the image of the ideal Carabinero, one who embodies heroism, devotion to homeland and self-sacrifice, (even to the point of dying) has been successfully maintained.[7] His body was brought to Santiago where he was accorded a state funeral and he was interred under the monument to the glories of Carabineros de Chile. The "Escuela de Fronteras" of Carabineros bears his name, as many other shools and streets in Chile.[8] Under the planning of the Commander of the First Division of the Army, General Julio Alsogaray, a military coup against Argentine president Illia took place on June 28, 1966. General Alsogaray presented himself in Illia's office that day, at 5:00 a.m, and 'invited' him to resign his post.[9] Illia refused to do so at first, citing his role as Commander-in-Chief, but at 7:20, after seeing his office invaded by military officers and policemen with grenade launchers, he was forced step down. The next day, General Juan Carlos Onganía became the new Argentine President.

Both countries gave different accounts of the incident, each accusing the other of initiating the attack. Argentine sources denied the number of 90 members of Gendarmes, but Argentine government never investigated the killing of the Chilean officer. Michel Morris stated that Argentina has used threats and force to pursue its claims against Chile and Great Britain and that some of the hostile acts or armed incidents appear to have been caused by zealous local commanders.[10] Gino Bianchetti Andrade thinks that the Argentine gendarmerie made in this case an deliberated and planned use of violence in order to obtain control of the zone and political preponderance of the force.[11]

Happily for Chile, the recently elected reformist Frei proved less vulnerable to Chilean jingoes; Illía did not enjoy such good fortune: his earlier attempt to reach some accommodation with the Peronists, including permitting Isabel Perón to visit Argentina, had eroded his regime's legitimacy. The border dispute provided a superb opportunity for the somewhat discredited Argentine armed forces to refurbish their tattered image as the protector of the motherland. Indeed, already displeased with Illía's political appointments, the military adroitly orchestrated a media campaign to humiliate the president and contravene his policies. Eventually, General Onganía used Illía's supposed craven behavior vis-à-vis Santiago, as the excuse to overthrow the Radical president. Happily the turmoil remained confined to Argentina. The more restrained elements managed to calm the rhetoric: Chile and Argentina eventually agreed to resolve the Laguna del Desierto through negotiation. ...

... [Chilean historian Valenzuela] discovered maps that plainly demonstrated that the Chileans had violated Argentine territory, not the other way around. This unpleasant truth did not prevent the Chilean diplomats from arguing that their nation owned the disputed territory or the senate from accusing Frei of being a vendepatria [Spanish for traitor].[12]