A laager, also known as a wagon fort, is a mobile fortification made of wagons arranged into a rectangle, a circle or other shape and possibly joined with each other, an improvised military camp. Ammianus Marcellinus, a Roman army officer and historian of the 4th century, describes a Roman army approaching "ad carraginem" as they approach a Gothic camp.[1] Historians interpret this as a wagon-fort.[2]

Notable historical examples include Hussites, which called it vozová hradba ("wagon wall"), known under the German word Wagenburg ("wagon castle"), tabors in the armies of the Polish-Lithuanian Commonwealth and Cossacks, the Laager of South Africans, and defense formations of early American settlers, known as corrals.[3]

From Second World War armoured warfare, a laager is a formation of tanks or other armoured vehicles, used for quick resupply or refueling. It is rather vulnerable to attack, especially from the air, so it is only maintained for a short period, in a relatively safe location.

A laager, lager, leaguer or laer (Afrikaans, from Dutch leger (camp or army); Dutch pronunciation: [ˈlaːɡər] or [ˈliɡər]). The word is South African in origin, and originally referred to a formation used by travelers whereby they would draw wagons into a circle and place cattle and horses on the inside to protect them from raiders or nocturnal animals. In 19th century America, the same approach was used by pioneers who would "circle the wagons" in case of Native American attack.[citation needed]

A tabor is a convoy or a camp formed by horse-drawn wagons. For example, nomadic Gypsies used to wander and camp in tabor formations. Tabors supported the armies in Europe between the 13th and 20th centuries. Tabors usually followed the armies and carried all the necessary supplies and rear units, such as field kitchens, armourers or shoemakers.

The tactics were later copied by various armies of Central Europe, including the army of the Polish-Lithuanian Commonwealth. In the 16th and 17th centuries, these tactics were also mastered by the Cossacks, who used their tabors for the protection of marching troops as well.

One of the earliest examples of using conjoined wagons as fortification is described in the Chinese historical record Book of Han. During the 119 BC Battle of Mobei of the Han–Xiongnu War, the famous Han general Wei Qing used armored wagons known as "Wu Gang Wagon" (武剛車) in ring formations to neutralise the Xiongnu's cavalry charges, before launching a counteroffensive which overran the nomads.

In the 13th century the armies of Kievan Rus used the tabors in the Battle of Kalka to defend themselves from Mongol forces.

In the 15th century, during the Hussite Wars, the Hussites developed tactics of using the tabors, called vozová hradba in Czech or Wagenburg by the Germans, as mobile fortifications. When the Hussite army faced a numerically superior opponent, the Bohemians usually formed a square of the armed wagons, joined them with iron chains, and defended the resulting fortification against charges of the enemy. Such a camp was easy to establish and practically invulnerable to enemy cavalry. The etymology of the word "tabor" may come from the Hussite fortress and modern day Czech city of Tábor which itself is a name derived from biblical Jezreel mountain Tavor (in Hebrew תבור).

The crew of each wagon consisted of 18 to 21 soldiers: 4 to 8 crossbowmen, 2 handgunners, 6 to 8 soldiers equipped with pikes or flails, 2 shield carriers and 2 drivers. The wagons would normally form a square, and inside the square would usually be the cavalry. There were two principal stages of the battle using the wagon fort: defensive and counterattack. The defensive part would be a pounding of the enemy with artillery. The Hussite artillery was a primitive form of a howitzer, called in Czech a houfnice, the word the English word howitzer comes from. Also, they called their guns the Czech word píšťala, meaning that they were shaped like a pipe or a fife, from which the English word pistol is possibly derived. When the enemy would come close to the wagon fort, crossbowmen and hand-gunners would come from inside the wagons and inflict more casualties on the enemy at close range. There would even be stones stored in a pouch inside the wagons for throwing whenever the soldiers were out of ammunition. After this huge barrage, the enemy would be demoralized. The armies of the anti-Hussite crusaders were usually heavily armored knights, and Hussite tactics were to disable the knight's horses so that the dismounted (and slow) knights would be easier targets for the ranged men. Once the commander saw it fit, the second stage of battle would begin. Men with swords, flails, and polearms would come out and attack the weary enemy. Together with the infantry, the cavalry in the square would come out and attack. At this point, the enemy would be eliminated, or very close to it.

Another use of this tactic would be very similar to the infantry squares used by Wellington at the Battle of Waterloo and the South African laager. The wagon forts would form into squares that would support each other. Whenever an enemy charged between two forts, marksmen from both of them would easily exploit the advantage and kill many of the enemy. The wagon fort was later used by the crusading anti-Hussite armies at the Battle of Tachov. However, the anti-Hussite German forces, being inexperienced at this type of strategy, were defeated. The Hussite wagon fort would meet its demise at the Battle of Lipany, where the Utraquist faction of Hussites defeated the Taborite faction by getting the Taborites inside a wagon fort on a hill to charge at them by at first attacking, then retreating. The Utraquists would reunite with the Catholic Church afterwards. Thus ended the wagon fort's effect on Czech history. The first victory against the wagon fort at the Battle of Tachov showed that the best ways to defeat it were to either prevent it from being erected in the first place, or to get the men inside of it to charge out of it, by means of a feint retreat. Thus, the fortification would lose its prime advantage. The wagon fort's effect on Czech history was lost, but the Czechs would continue to use the wagon forts in later conflicts. After the Hussite Wars, foreign powers such as the Hungarians and Poles who had confronted the destructive forces of the Czech Hussites, hired thousands of Czech mercenaries. At the Battle of Varna in 1444, it is said that 600 Bohemian handgunners defended a wagon fortification. The Germans would also use wagons for fortification. They would use much cheaper materials than the Hussites, and they would have different wagons for the infantry and the artillery. The Russians also used a type of movable fortress, called a guliai-gorod in the 16th century. 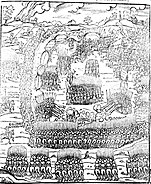