The LAPA FA-03 rifle was developed by Nelmo Suzano at Laboratorio de Pesquisa de Armamento Automatico (LAPA) between 1978 and 1983. This lightweight bullpup rifle features a plastic housing and an interesting double action trigger system, but very few rifles were made in mid-1980s, probably no more than 500 in total. Some of the LAPA FA-03 rifles are still used by special police forces of Brazil.

The LAPA FA-03 assault rifle is a gas operated weapon that uses conventional piston-operated system with rotating bolt locking. The most unusual thing about FA-03 is its trigger, which can be set to "double action" mode, in which rifle can be carried safely with loaded chamber and hammer in lowered position, safety disengaged. In this mode, rifle is ready to fire but it requires along and deliberate trigger pull to fire the first round (a system very popular in modern semi-automatic pistols). Otherwise this was a fairy conventional weapon, with right side only ejection and open sights (rear sight is built into carrying handle).

Images of the FA-03 supposedly modernized

LAPA CA-03: the carabine version of the LAPA FA03

LAPA FA-03 LSW Version, an Light machinegun version of the LAPA FA-03, in this photo equipped with a AN/PVS-4 Night Vision Scope

LAPA FA-03 with an EOTECH scope

LAPA FA-03 with an ACOG Scope 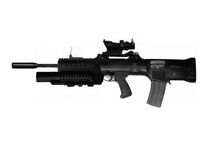