Kumamoto Castle (熊本城, Kumamoto-jō?) is a hilltop Japanese castle located in Chūō-ku, Kumamoto in Kumamoto Prefecture.[1] It was a large and extremely well fortified castle. The castle keep (天守閣, tenshukaku?) is a concrete reconstruction built in 1960,[1] but several ancillary wooden buildings remain of the original castle. Kumamoto Castle is considered one of the three premier castles in Japan, along with Himeji Castle and Matsumoto Castle.[2] Thirteen structures in the castle complex are designated Important Cultural Property.[1]

Kumamoto Castle's history dates to 1467, when fortifications were established by Ideta Hidenobu.[1] In 1496, these fortifications were expanded by Kanokogi Chikakazu.[1] In 1588, Katō Kiyomasa was transferred to the early incarnation of Kumamoto Castle.[1] From 1601 to 1607, Kiyomasa greatly expanded the castle, transforming it into a castle complex with 49 turrets, 18 turret gates, and 29 smaller gates.[1] The smaller castle tower, built sometime after the keep, had several facilities including a well and kitchen.[1] In 1610, the Honmaru Goten Palace was completed.[1] The castle complex measures roughly 1.6 km (0.99 mi) from east to west, and measures 1.2 km (0.75 mi) from north to south. The castle keep is 30.3 m (99.4 ft) tall.

The castle was besieged in 1877 during the Satsuma Rebellion, and the castle keep and other parts were burned down.[1] 13 of the buildings in the castle complex were undamaged, and have been designated Important Cultural Properties. In 1960, the castle keep was reconstructed using concrete.[1] From 1998 to 2008, the castle complex underwent restoration work, during which most of the 17th century structures were rebuilt.[1]

The signature curved stone walls, known as musha-gaeshi, as well as wooden overhangs, were designed to prevent attackers from penetrating the castle. Rock falls were also used as deterrents.

In nearby San-no-Maru Park is the Hosokawa Gyobu-tei, the former residence of the Hosokawa clan, the daimyo of Higo Province during the Edo period. This traditional wooden mansion has a noted Japanese garden located in its grounds.

In 2006, Kumamoto Castle was listed as one of the 100 Fine Castles of Japan by the Japan Castle Foundation. On December 7, 2007, a large-scale renovation of the Inner Palace was completed. A public ceremony for the restoration was held on April 20, 2008. 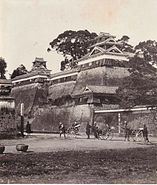 Model of the castle and city in the Edo period.

Honmaru Palace of Kumamoto Castle as seen from the Tenshu.

Regular cultural performances in front of the main castle.