The Kosovo Security Force (Albanian language: Forca e Sigurisë së Kosovës, (KSF) is an emergency response force charged with conducting operations in Kosovo and abroad in the areas of Search and Rescue, Explosive Ordnance Disposal, Firefighting, and Hazardous Material Disposal. It is widely assumed that the KSF will take on an additional defense role after a governmental review of the organization in 2013. The Commander of the KSF is Lieutenant General Kadri Kastrati.

In March 2008, the NATO-led Kosovo Force (KFOR) and the Kosovo Protection Corps (KPC) started preparations for the formation of the Kosovo Security Force. According to guidance laid out in the Ahtisaari Plan, the security force is permitted to carry light weapons and the Government of Kosovo and the international community planned to bring the force in line with NATO standards. "The plan envisages that the security force be comprised of 2,500 active soldiers and 800 reservists at age 19-35." The admission and the training of personnel began in early June, when NATO experts arrived in Kosovo to guide the process.[3] From early December 2008, enlisting began for the Kosovo Security Force. The age of candidates is 18–30 years old.[4]

On January 21, 2009, the Kosovo Security Force was officially launched. The KSF did not replace the Kosovo Protection Corps (KPC) which was disbanded several months later. KFOR was charged with mentoring the KSF and bringing the force to Full Operational Capability. As part of this effort, various nations that are part of KFOR have provided assistance to the force on a bilateral basis including uniforms which were supplied by the United States and vehicles which were donated by Germany. Mentoring efforts were meant to develop the KSF in line with NATO standards.[6][7][8] Additionally Italy, Portugal and other NATO members are to help the KSF by donations and training.[4][9][10] Slovenia donated €30,000 towards the establishment of the KSF.[8]

In addition, NATO established a NATO Advisory Team (NAT) to mentor and advise the Ministry of the Kosovo Security Force in its oversight of force operations. The NAT was composed of uniform and civilian area experts from several NATO and non-NATO nations.

The following senior officers took their oaths on June 16, 2009, under the supervision of then KSF Commander Lieutenant-General Sylejman Selimi:[11]

On September 15, 2009, the Kosovo Security Force officially began the work, with its initial operational capacities after an eight month training with NATO instructors.[12]

In 2010, the KSF deployed to northern Albania on two separate occasions to perform flood relief operations in support of the Albanian domestic response.

The Kosovo Security Force (KSF) is a new, professional, multi-ethnic, lightly armed and uniformed Security Force that is subject to democratic, civilian control. Its mission is to conduct crisis response operations in Kosovo and abroad; civil protection operations within Kosovo; and to assist the civil authorities in responding to natural disasters and other emergencies.

Such duties will include search and rescue operations; explosive ordnance disposal (de-mining and UXO removal); the control and clearance of hazardous materials; fire-fighting; and other humanitarian assistance tasks. The KSF will represent and protect all the people of Kosovo.

The mission of the MKSF, which is also the highest level KSF Headquarters, is to formulate, implement, evaluate and develop the policies and activities of the KSF within a framework of democratic governance and in accordance with the Constitution and laws of the Republic of Kosovo. 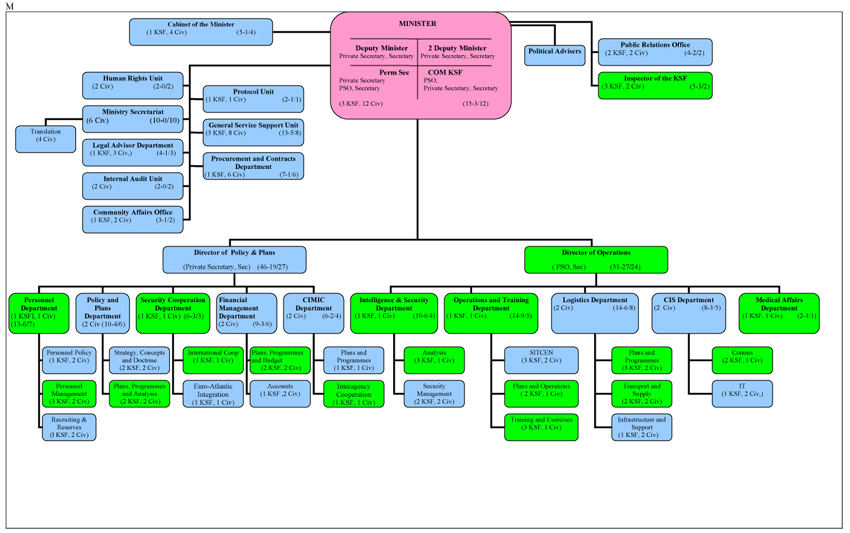 Note: Kosovo and the KSF possesses a vast arsenal of weaponry in stock piles which are not included in the list below. t This arsenal has been obtained during and after the War in Kosovo through black markets and also donations from various countries and organisations, most of that weaponry is not officially commissioned with the armed forces due to the conditions imposed by the Ahtisaari Plan, which does not allow Kosovo to posses a armed force with heavy weaponry during its transition phase, but as we have seen with the Cobra armoured vehicles this condition is not very well enforces. This means that most of this weaponry is in reserve as its either stored in armouries or its in the hands of paramilitary groups connected to the government. Heavy Weaponry that were used by the KLA like the few dozen Albanian donated Type 59 main battle tanks, Howitzers, Stinger and Strela 2 MANPADS also several types of modern western and soviet ATGM and Recoilless rifle, also infantry and heavy mortars 60mm, 82mm, 120mm & 160mm were either smuggled back to the northern region of Tropoj & Has in Albania for storage whilst some was directed to Macedonia for the war there. Same fate was for the Serbian captured light and medium weapons.
Some heavy weaponry captured from Serbian forces especially those in the Battle of Košare, like several T-55, M80, BOV & M53/59 Praga, were turned over to KFOR after the war and returned to Serbia whilst a few more damaged vehicles were turned into museum pieces. This list includes only official commissioned equipment of the KSF.