A large number of films, books, and other media have depicted the Korean War in popular culture. The TV series M*A*S*H is one well known example. The 1959 novel The Manchurian Candidate has twice been made into films. The 1982 film Inchon about the historic battle that occurred there in September 1950 was a financial and critical failure. Many films about the war have been produced in Asian countries as well. 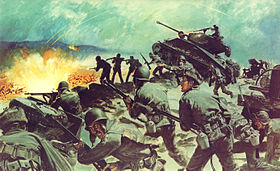 U.S. Army poster depicting the breakthrough at the Battle of Chipyong-ni.

In North Korea the Korean War has always been a favorite subject of film, both for its dramatic appeal and its potential as propaganda. The North Korean government film industry has produced many scores of films about the war. These have portrayed war crimes by American or South Korean soldiers while glorifying members of the North Korean military as well as North Korean ideals.[6][verification needed] Some of the most prominent of these films include:

Singer-songwriter David Rovics sings about the Korean War in his song "Korea" on the album Song for Mahmud.

The Colombian theatrical work El monte calvo (The Barren Mount), created by Jairo Aníbal Niño, used two Colombian veterans of the Korean war, and an ex-clown named Canute to criticize militarist and warmongering views, and to show what war is and what happens to those who live through it.[7]