The Grand Masters of the Knights Templar during the later 12th and the 13th century used a double-sided seal which showed a representation of The Dome of the Rock (or a circular dome of the Church of the Holy Sepulchre) on one side, and the Order's symbol of two knights on one horse on the other side. This design is first attested as in use by Bertrand de Blanquefort, the order's sixth Grand Master, in 1158, forty years after its foundation, and it remained in use until the dissolution of the order in 1312.

There was also a smaller, single-sided seal, which showed the Dome of the Rock (or the Holy Sepulchre), only.[citation needed]

Different seals were used by provincial masters of the order. According to a papal bull issued by Innocent IV in 1251, it was customary for successive provincial masters to use the same seal. The master of Provence continued to use an Agnus Dei seal, while the seal of the Aragonese master William of Cardona and his successors depicted a knight on horseback, carrying a lance and shield, on which was a cross bearing the legend: S. MINISTRI TEMPLI 1 ARAGON 7 CATALON ("Seal of the minister of the Temple in Aragon and Catalonia").

Dome of the Rock and Al Aksa

The reverse of Bertrand de Blancafort's seal, Master of the Temple 1168 in Staatsarchiv Amberg

The reverse of Grand Master William de Chartres seal from 1214 also depicts the Dome of the Rock.

In heraldry, a Lamb of God (or paschal lamb, or agnus Dei) is a lamb passant proper, with a halo or charged with a cross gules, and the dexter forelimb reflexed over a cross staff from which a pennon of St. George (Argent a cross gules) is flotant. The seals of the Masters of the Temple in England: of Aimery de St Maur, 1200, Robert of Sandford, 1241, Richard of Hastings, 1160–85, and William de la More, 1304, showed the agnus Dei.

SIGILLVM TEMPLI The obverse of a seal used by William de la More, master, 1304, resembles the above text . The reverse, a small oval counter-seal, with beaded borders, shows on the right a couped bust of a bearded man wearing a cap. and have the legend:— TESTIS SUM AGNI ("I am a witness to the Lamb") William de la More, styled frater Willelmus de la More miliciae. The seal is called commune sigillum capituli. The seal symbolic of their vow of poverty, showing two knights riding on one horse appears only to have been used by the order in France; there is no example of its use in England.

Some of the seals of the English Templars were a semi-typical Pascal lamb bearing sometimes, not the flag of St George (or the cross), but the Beauseant, the battle banner of the order.

Seal of Robert of Sandford, the Master of the Temple in 1241 in the British Library

The Templar Seal showing two knights (perhaps Hugues de Payens and Godfrey de Saint-Omer) on one horse. There are many interpretations of the symbolism of this seal.

The image of two knights on the horse was widely used:

The seals of the Grand Masters have textual differences:

While Vichiers' motto is written in Latin, the word 'Christ' begins with Greek letters (Chi Rho) (Latin symbol, XP) rather than the Latin CHR. The XP symbol arose early in Christianity and entered popular usage after the legendary pre-battle vision of Chi Rho and Christian conversion of the 4th century Roman Emperor Constantine. From the time of Constantine, XP was a significant symbol of Christianity, surpassed only by the cross itself. Early military associations make Chi Rho an apt symbol for the Templars. On de Vichiers' seal, Chi Rho is visible on the shields of the knights.

The Double-Headed Eagle is more commonly associated with the highest rank earned by a Scottish Rite Mason... Bertram von Esbeck, Master of the Temple in Germany, 1296 depicts an eagle with two six-pointed stars.[citation needed]

A cross having arms narrow at the inner center, and very broad at the other end. 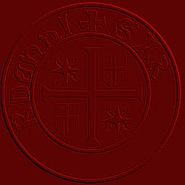 Fra Arnaude de Banyuls seal; Aragon; Gardeny; Yellow wax, round, 27 mm. in diameter, depicting a cross, with stars in two angles and shields with crosses in the other two. Legend: S. AR..........GARDENNI.

The Masters of Poitou used this seal. It has been used from the middle of the 12th century to the end of the Order.

A seal from Provence: the Templars from Roaix, Sérignan ... This knight, Giraud de Chamaret, hoists the templar cross and the "fleur-de-lis". 1234. 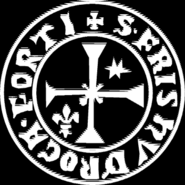 Brother Hugues de Rochefort (Hughs from "ROCAFORTI") 1204 seal. With a star and a "fleur-de-lis", this cross, hart bounded, was the Preceptor's Temple seal. 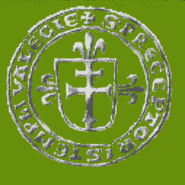 The seal of the preceptor of Poitou Legend = S PRECEPTORIS TEMPLI VALECE. Year: 1287. Appears on a charter from Saint Victor lès Valence. Seal can be found at the Archives of the City of Marseille and a moulding at the National Archives of Paris.

Knight on the Horse

The seal of Brother Roustan de Comps, commander of the Order of the Temple at Richerenches, 1232, shows a single knight on horseback, bearing a shield with a cross: probably St. George.

Seals of Brother Widekind, Master of the Temple in Germany, 1271, and Brother Frederick Wildergrave, 1289, showed Christ's head (or John the Baptist's head by other opinions)

The seal of Templar officials in Yorkshire c.1300 shows a tower with a pointed roof. 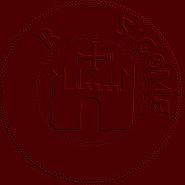 Here is a Templar cross found in the oldest tower of Château de Guilleragues in the Aquitaine region of France. 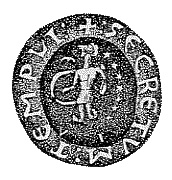 The word Abraxas (or Abrasax or Abracax) was engraved on certain antique stones, called Abraxas stones, which were used as amulets or charms by Gnostic sects. Amulets and seals bearing the figure of Abraxas were popular in the 2nd century, and were used also in the 13th century in some of the seals of the Knights Templar. By medieval times, Abraxas was relegated to the ranks of demons. The image most associated with Abraxas is that of a composite creature with the head of a rooster, the body of a man, and legs made of serpents or scorpions. He carries a whip and shield, called wisdom and power. Occasionally Abraxas is depicted driving a chariot drawn by four horses, probably representing the elements.

"Afterwards broke out the heretic Basilides. He affirms that there is a supreme Deity, by name Abraxas, by whom was created Mind, which in Greek he calls Nous; that thence sprang the Word; that of Him issued Providence, Virtue, and Wisdom; that out of these subsequently were made Principalities, powers, and Angels; that there ensued infinite issues and processions of angels; that by these angels 365 heavens were formed, and the world, in honour of Abraxas, whose name, if computed, has in itself this number. Now, among the last of the angels, those who made this world, he places the God of the Jews latest, that is, the God of the Law and of the Prophets, whom he denies to be a God, but affirms to be an angel." 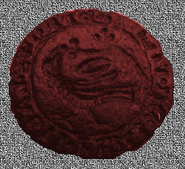 Used on the Seal of Etienne de Til-Chatel, lord of Pichanges, Preceptor of La Fontenotte. Representation of a dove, facing backwards and grasping an olive branch within its beak.

Frater Robert from the land of Retz. Seal from English 13th century. This seal was discovered in the 19th century, in the city of St Père en Retz, at Biais, Loire Atlantique, on the site of a templar Commandery.

Seals of Brother Otto of Brunswich, commander of Supplingenburg, shows a lion; A seal of one Knight Templar, England, 1303 is showing the Lion of England and the cross pattée and the crescent moon of the Mother Goddess with stars. Aragon; Miravet; 1278, 1287. Depicting a lion

William, Master of the Temple in Hungary and Slovenia, 1297, depicts a winged griffon