The Special Operation Forces of the Jordanian Armed Forces serve as Jordan's premiere special forces unit. Founded on April 15, 1963 on the orders of the late King Hussein, its primary roles include reconnaissance, counter-terrorism, search and evacuation, intelligence gathering combat, and the protection of key sites. The Special Operation Forces are also charged with carrying out precision strikes against critical enemy targets. The 7,000-strong unit[3] are equipped and trained to be able to operate behind enemy lines for long periods without any logistical support, and is considered one of the finest special forces units in the world.[4][by whom?]

Since their establishment in 1963, the Jordanian special operations forces were meant to be flexible and dynamic, in order to successfully face the ever-changing threats to Jordan national security. Their organizational structure has evolved significantly over the past half-century, as internal and external threats changed.

With the beginning of this century and the emergence of new threats to national security, Jordan established paramilitary troops—the Gendarmerie. The new military force was, and remains, tasked with countering homeland security threats, thus allowing the Special Operations Forces to focus on homeland defense threats.Therefore, the concept changed accordingly, from special operations to joint special operations.

The previous organization of the Royal Joint Special Operations consisted mainly of three main brigades with all standard support and service units that facilitate operations and training.

In the summer of 2017, the new chairman of the Joint Chiefs of Staff of JAF, Lieutenant General Mahmoud Freihat, launched a package of reforms across JAF—many of which appear to be driven by budgetary constraints. The reforms included specific initiatives that could significantly change the shape of the Jordanian special operations community.

The first measure deactivated JORSOCOM headquarters and downgraded the highest-ranking special forces commander from a major general to a colonel-rank officer. The second measure transitioned the 28th Royal Ranger Brigade out of special operations and integrated it with the regular army as a rapid response brigade.

The third initiative similarly mandated the transition of the 5th Aviation Brigade out of special operations command to the Jordanian air force. The brigade has been supported by the U.S. 160th Special Operations Aviation Regiment, which carries out quarterly reviews of their Jordanian counterparts. The level of U.S. oversight and support for this brigade has made it one of the most effective elements of Jordanian special forces. While the brigade’s aircraft and pilots now fall under air force control, the brigade will play a direct support role to Jordanian special forces.

The result of reforms is to condense a three-brigade Joint Special Operations Command down to a single army-specific group—known as the King Abdullah II Royal Special Operation Forces Group—with most support elements, including administration and logistics, stripped away. At the heart of the new group are the 101st and the 71st battalions, which were converted into Special Unit I—special operations—and Special Unit II—counterterrorism.[5]

The King Abdullah II Special Operations Training Center (KASOTC) is indeed a one-of-a-kind facility in the region. It was conceived to be a training hub for elite forces, law enforcement and counter-terrorism operators not only in the region, but worldwide. KASOTC offers trainees a unique opportunity to gain experience and knowledge, and to interact with similar forces from other countries, which will create a pool of highly qualified professionals who can meet the challenges of cross-borders threats.

The center’s instructors come from all over the world and were carefully selected in light of their very strong qualifications and solid experience, which is a tremendous asset to all those who participate in training at KASOTC.

KASOTC derives extraordinary success from this unique combination of elite instructors and advanced technology. When knowledge is combined with experience, a maximizing effect occurs to skills obtained, making the KASOTC experience unique to all other training facilities. It is the only reality-based, live-fire training facility of this kind in the world. Operated as a commercial enterprise, it is uniquely integrated with the Jordanian Armed Forces. This relationship is a bold innovation; providing access to military equipment and support that expands all training horizons.

Located north of Amman, Jordan in an old rock quarry, the twenty-five (25) square kilometer facility is safe, secure and isolated. It is equipped with multiple distance ranges; from a 1300-meter unknown distance range to a 300-meter, moving target range to accommodate most firearm requirements. It has a four story, close quarters battle (CQB), live-fire structure and the largest mock city in existence, 67 buildings, which include numerous arrangements from an Afghan village to an embassy. Special battlefield effects, live fire compatible throughout, with a fiber optic network connecting the Range Operations Control Center (ROC) to the hundreds of cameras, microphones, target systems, and simulators make testing the user's creativity in tactics, techniques and procedures a reality. Together with on-site lodging, dining, gym, pro-shop, weapons/equipment rental and storage; people can easily see why KASOTC is the ideal place to do what in necessary to prepare forces for the challenges of 21st century armed conflict.

To train and qualify officers and NCOs from JAF, Arab and Friendly countries on RNG/ARBN and Special Operations.

From a psychological point of view, applicants are evaluated by a military psychologist in order to assess their personal and leadership traits. Then, applicants undergo a medical screening and an initial PT test. Those who make it through this preliminary selection phase are admitted to an endurance camp (boot camp) for a month of extensive training. The camp is designed to test trainees’ ability to work under physical and mental stress.

Upon completing the camp, recruits take ranger and parachute courses. After this second phase, they are sent to specialized courses to complete their military professional training. 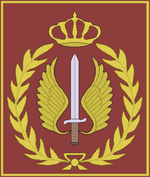